Sean Astin Willing, But Not Hopeful For 'Hobbit' Role

'The Hobbit' discussion continues as The MTV Movie Blog has caught up with LOTR cast member Sean Astin (Samwise Gamgee). Check out what everyone's favorite savior or Middle-earth has to say:

"I've said since before we started making the movies and have never wavered for a second that 'The Hobbit' would get made," Sean Astin -- who portrayed Samwise Gamgee -- insisted, while out promoting his new film, "The Final Season." "The fanbase wants it. There's too much money to be made doing it. It seems like maybe the time is now."

There is a lot more over at MTV, check it out!

Morgan writes: Just sending a heads up on last night's Charlie Rose show. He interviewed Bob Shaye (and Michael Lynne) of New Line and asked all about Peter Jackson and his involvement in The Hobbit...Ringers may find it very interesting to see Shaye look uncomfortable with the questions.

Ringer Steele alerts us to a downright HUGE article in this week's Entertainment Weekly. You won't want to miss it:

"Just a heads up, if case you didn't know, that there is a huge 7(!) page cover story on the current status of The Hobbit in the Entertainment Weekly which hits newsstands tomorrow (10/05). I would call it cautiously optimistic - confirmation that New Line and PJ apparently are now talking - and a good overall summation of the PJ/New Line/Hobbit situation to date."

The story is now posted at EW.com! Be sure to pick up your copy at news-stands tomorrow!

From The Hollywood Reporter (via Mania.com) Just two months ago, the media received word that New Line was softening its position against Peter Jackson in hopes of a possible HOBBIT movie somewhere in the near future. The hostility went from the studio head Robert Shaye saying "So the answer is he will never make any movie with New Line Cinema again while I'm still working for the company." (via SciFi.com) to "Notwithstanding our personal quarrels, I really respect and admire Peter and would love for him to be creatively involved in some way in The Hobbit.” (via LA Times) Whether the two sides have even talked to one another since then, it appears that New Line is accepting a fine handed to them from a Federal Judge for the failures of handing over documents as requested, something Peter Jackson has said from the beginning causing the court case. The $125,000 fine could have been contested or sought a review which would have taken more time in this ongoing court battle. Instead, they're accepting the decision. New Line's attorney Robert Schwartz wrote, "Mindful that the court's resources are valuable and limited, New Line will neither oppose that award nor seek review" of the order.

Kristin Thompson, author of The Frodo Franchise: The Lord of the Rings and Modern Hollywood, writes: On October 5 at 1:30 pm, I’ll be at the Intellectual Property bookstore in Austin for a brief presentation, Q&A, and signing. It’s located on the edge of the University of Texas campus at 24th and Guadalupe (Map).

'The Frodo Franchise' Booksigning in TX

Vanessa "Saffron" Price, Online Community Representative for The Lord of the Rings Online: Shadows of Angmar, writes: Barliman Butterbur, the proprietor of The Prancing Pony, is always happy to supply a pint and a warm fire to adventurers and townsfolk alike. If you find yourself in Bree, stop in to the famous inn and meet the shrewd innkeeper and his hobbit assistants!

Vanessa "Saffron" Price, Online Community Representative for The Lord of the Rings Online: Shadows of Angmar, writes: When travelling the shores of Lake Evendim, visit the island of Tinnudir and seek out the rangers standing guard over the ruins of Annúminas. Ever-vigilant, they keep the tombs of the kings safe from lowly tomb-robbers.

The Greatest Trilogies of our Times

Andy writes: My name is Andy and I'm currently studying at a business academy in Germany. In the course of the last couple months, we were to work out a report dealing with some financial matters. I wrote my report on THE LORD OF THE RINGS IN COMPARISON TO OTHER GREAT MOVIE TRILOGIES OF OUR TIME, dealing with gross and production budgets. I was originally written in German but you can find a translation unter the button "English Report" on the right hand side of the homepage of my site.

The Greatest Trilogies of our Times

Garfeimao writes: It has been a month since the Cruise to Middle earth in November, 2008 was announced and the response has been phenomenal. I have been getting a lot of response from single travelors, some willing to travel alone and some reticent to travel alone but unsure how to find travelling companions. [Cruise Update] [Complete Cruise Details]

LOS ANGELES (Hollywood Reporter) - British scribe Steven Moffat, best known for writing the new "Doctor Who" series, is turning his hand to "Tintin," the DreamWorks movie trilogy collaboration from Peter Jackson and Steven Spielberg. Tintin, created by late Belgian artist Herge, is a young reporter and world traveler who is aided in his adventures by his faithful dog Snowy. He later was joined by such colorful characters as Captain Haddock, Professor Cuthbert Calculus and bumbling detectives Thomson and Thompson. The books, hugely popular in Europe, have been translated into 50 languages with more than 200 million sold. Jackson and Spielberg are each directing an installment, with the helmer of the third movie to be determined.

Weta teams up with big guns

It's a project that will bring Sigourney Weaver and James Cameron to town and will be made, in part, in Wellington. Avatar is being touted as a futuristic, ground-breaking film, and as Weta digital's visual effects maestro Joe Letteri told ONE News, Weta, along with hundreds of Kiwi contractors are helping to make it happen. The film is Cameron's latest project. His last film was Titanic - the very same Titanic that was released 12 years ago and is still the highest grossing film ever made.

Weta teams up with big guns

With kind permission John Howe has allowed us to re-print his newsletter entries as they are released. Take a look at the latest edition! Heroes & Heorot (or Ages Dark & Light): New books are always a welcome event, especially as they provide an excuse to briefly escape from the studio and get out into the rest of the world a moment. (Like many illustrators, the time spent proportionately in the former as opposed to the latter is sadly inferior in quantity; quality, of course, not being issue open to debate or even wise to contemplate.)

It may be a long way back to recapture audiences lost to classical music through the disappearance of music education from the schools, changing lifestyles and perceptions of elitism, but the way back may be through places like Middle-earth. The average age at Saturday night's performance of Howard Shore's "Lord of the Rings Symphony" by the Cincinnati Symphony Orchestra at Music Hall appeared much younger than the normal mid-50s demographic. CSO staffers scrambled to handle the walk-up traffic just minutes before the concert, and it seemed that only the unsellable seats in the 3,516-seat hall (several hundred are limited and obstructed views) remained empty.

'The History of the Hobbit' Released

Sometimes, I just love being me...This week Houghton Mifflin sent me a surprise package which to my delight contained 'The History of the Hobbit' part 1 and 2 by John Rateliff. Each volume is available now, while the 3 book set (which included The Hobbit) is available for pre-order on Amazon.com today. Be sure to pick up your copy today!!

'The History of the Hobbit' Released

Arwen writes: The fifth edition of TORN's annual Baggins Birthday picnic celebration in Los Angeles' Griffith Park was a well attended, joyful, fun filled event. Due to the area next to the Merry-Go-round occupied all day by the UN's "Day Of Peace" activities, the Baggins picnic had to be moved to a different location, and there was some fear that partygoers may get lost, but eventually everyone found their way to the grounds (probably guided by some wizardry from Gandalf!).

Earlier this month Viggo Mortensen was a guest on 'The Late Show with David Letterman'. He was there to promote his new film 'Eastern Promises'. Take a look at the following clips for that interview! 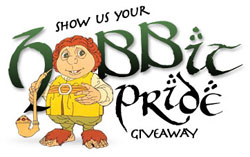 Our 'Show us Your Hobbit Pride' Giveaway is running until October 12th - don't miss your opportunity to win some great prizes! Follow the link for complete details.

'Show us your Hobbit Pride' Giveaway

Jeff Anderson is not a nerd. The 40-year-old chief executive of Westwood (Mass.) video game developer Turbine is six feet tall, with the frame of an NFL linebacker. Nevertheless, he presides over a vast and rapidly growing virtual world of elves, orcs, dragons, and hobbits. In April, Anderson's company took the wraps off the Lord of the Rings Online, a massively multiplayer online role-playing game (MMORPG) for PC, based on J.R.R. Tolkien's classic books. The explosive growth of the game—players have created some 4 million unique characters in just five months—has vaulted the company into the top tier of online game design companies and made it the largest privately held developer of massively multiplayer games in the U.S.

Susanne writes: 'In Business', a BBC Radio 4 programme, includes an interview with Richard Taylor on his approach to business. 'In Business hears from .. the man who created the special effects behind the movies of Lord of the Rings and King Kong.' 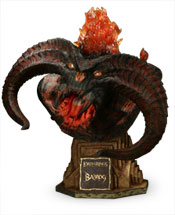 The Balrog Legendary Scale Bust is now available over at SideshowCollectibles.com:

"Sideshow Collectibles proudly presents this fantastic new addition to The Lord of the Rings Legendary Scale Bust series. The Balrog has been expertly sculpted to capture every detail of the creature's menacing visage and flaming hide. Hand-cast of the highest quality polystone, each bust is hand-painted and individually numbered. The Balrog Legendary Scale bust is the perfect addition to your The Lord of the Rings collection."