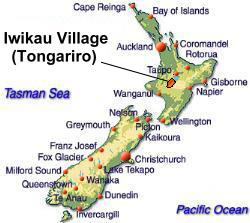 Ringer Spy Ian sends us news and pictures from the set up at Iwikau Village, in Tongariro National Park. Seems to be a great place to shoot Mordor... Check it out! [More]
Just to clarify... the filming up at Tongariro is finished for the time being, but we're still receiving Ian's wonderful photo-essay in installments.

You can catch Sean Bean (Boromir) in 'Airborne' on Cinemax. [More]

PJ and the Torch

In the long standing tradition of bringing the Olympic flame to its Host Country, Peter Jackson joins the epic list of folks who've done it in the past. Way to go PJ!!

Thanks to Ian for the pic!

I thought I'd start with a little blurb for FedEx, because FedEx have proved themselves 100% consistent in the service they provide TheOneRing.net. If you have anything that you want to lose, like incriminating documents, Rings of Power, or your mind, for instance, let FedEx take care of it. They're also quaintly old-fashioned enough to shut down for weekends so you can't contact them, which is an interesting approach to business in the 21st century. I imagine them inhabiting some kind of commercial Lothlorien, bypassed by the currents of time, where phrases like 'competitive advantage' never enter.

Anyway, this all relates to my appearance at Cond'Or, the SF/Fantasy convention in Wellington, last Sunday. For which I needed the slides Calisuri had prepared for me... [read on]

Poll over at Cinescape.

HuanCry has alerted us to a poll happening over at Cinescape: "Which of these movies would you see first if they were opening all at once?" LOTR is one of the options, and as of right now it's running second. You can do your little bit to change that here if you want.

"Disappearer" sent us a copy of an interview he recently conducted with actor Ian McKellan (the wizard Gandalf in The Lord of the Rings). The interview has appeared in CompuServe's UK Entertainment Forum but is new to the Internet.

D: You went straight from filming X-Men in Canada to Lord of the Rings in New Zealand. Ever get homesick?

Sir Ian: I am used to working away from home. Having just discovered e-mail though, I have kept in touch with friends and family much more than usual. Travel is the main perk of filming and currently in New Zealand I am overwhelmed by the spectacular mountains, water, glaciers and rainforests. [More]

TheOneRing.net Super-Spy Ciggy and JVC are back with some more amazing pictures! [More]
!!!Spoilers!!!

You can catch Bernard Hill (Theoden) in 'True Crime' on Cinemax. [More]

Piers Anthony, author of the Xanth series and many many others, was our featured guest at a live chat tonight in our chatroom Barliman's. You can see a log of this chat in our Events Section. [log]

And when you have some free time, check out Mr. Anthony's homepage, HiPiers.

Super Ringer Spy Xtem checks in with a brief report about some filming going on near the Wellington Airport. [More]

Nona from The Complete Sean Bean sends us an interview with Sean Bean (Boromir) that appeared in the July 2000 issue of 442 Magazine in the UK, a football (soccer) fan mag. The article is in support of Essex Boys, Sean's feature film which opens in July in the UK. LOTR is mentioned.

Click on each image to view in our srcapbook

Just letting you know that we've finished our Lord of the Rings cartoon contest. We received thousands of punchlines over the last week and readers have just voted on the winning punchline, which is a cute and clever reference to The Hobbit. I've posted the final cartoon as well as dozens of the funniest entries here.

Well, looks like the news is rather slow today, so I thought I would take a second to highlight some of the really cool parts of TheOneRing.net:

Did you know that the FOTR is definitely coming out December 14th 2001? Check out the international release dates and our countdown here.

Check out a great recipe for "Shire Soup."

Fan of the Hildebrandt Brothers and their Tolkien artwork? TheOneRing.net exclusively offers their work in our shop section.

Did you know Brad Dourif (Grima in LOTR movies) is going to be in the next Myst game? Check out Gaming Havens.

Looking for someone to discuss LOTR chapter by chapter with? Check out the "Reading Room" discussion area.

What does Christopher Lee (Saruman in the movies) have to say about J.R.R. Tolkien? Check out his words in our Green Books Tributes.

Well that should hold you for the weekend. After all, you do want to save some of the best stuff for the slow work days..:P

Unaccustomed as I am to public speaking.....

A note for all you Wellington Ringers, did you know that there's a Fantasy/Sci-Fi convention on there this weekend? Cond'Or, it's called, and it's at the West Plaza continuously all weekend. I'm going to be there on Sunday afternoon to talk a little about the The Lord of the Rings and about TOR.net, and show some slides. Though it's going to feel a bit like carrying coals to Newcastle. So if you've nothing better to do -and let's face it, it's not a great weekend for outdoor activities - drop in, have a listen, cheer or fling a tomato!
But hey, Tad Williams is going to be at the Con too, which is VERY cool. We'll try and talk him into coming to Barliman's some time.

Super Ringer Spy Galadriel chimes in on something we may have all missed in the Internet Preview... Elven warriors! [More]

From the land of Michael Marinez at Xenite.org comes this 'casting call' for horses. Click on the image to view it in all its glory; you think they have to pay the horses in salt licks?

The Ian Holm (Bilbo) film 'Beautiful Joe' is out in the Netherlands today.

You can catch Liv Tyler (Arwen) in 'Cookies Fortune' on Cinemax. [More]

You can see Bernard Hill (Theoden) in 'The Bounty' on Cinemax. [More]

Well, I asked for it!

Last night I asked your opinion on who Bruce Spence will play, and boy did I get a response! My mailbox was packed with HUNDREDS of emails from all you good TORNadoes with your opinions. After reading them all, I find that we were wrong, Bruce Spence will most likely be playing the
Mouth of Sauron. Here's a sample!

I think what is meant by "Black Lieutenant" is either Khamul, second in command of the Nazgul, also called the Lieutenant of Dol Guldur, or, more likely, the individual known as the "Mouth of Sauron", who appears at the Black Gate before the last battle bearing the, "... dwarf coat, elf cloak, and blade of the downfallen West..." which were stripped from Frodo while he was captive.

Thanks to everyone for sending their 2 cents!

The Latest E!Online articles are up

Really great updates at E!Online today! Descriptions of the Rivendell interiors and what's coming up in the indoor shoots, in Latest Word. There is also a detailed look at the fabric, fabric, jewellery and more fabric that Elves and Men will be wearing. Mouthwatering stuff, in their On Location article, though curiously the picture of "PJ instructing the extras at Hobbiton" suddenly has some huge snow-covered Alps in the background that aren't in Tolkien and aren't within a few hundred kms of the Hobbiton set either.

Wanna See Who is Playing The Black Lieutenant!

E! Online has scored a casting coup, getting info on who will be playing the Black Lieutenant! Some think the Black Lieutenant is commonly known as Sauron, maybe PJ has something else planned, whatever the character, the casting choice is made! What do you folks think? Sauron or not? [More]

Author of the Xanth series and 100 other books in a variety of genre, Piers Anthony, will be our honored guest at Barliman's chatroom on Sunday, June 4, 6:00 EDT [-5 hours GMT]. [MORE]details and Anthony links!

Once again, thanks to Olivier for translating this article from Mad Movies Magazine. John Howe talks his work with Alan Lee, what the Balrog may look like, a LOTR board game and what could happen with all his concept art! Click on the link, and scroll down to 'Part Two' [More]

You can catch Andy Serkis (Gollum) in 'Among Giants' on Cinemax. [More]