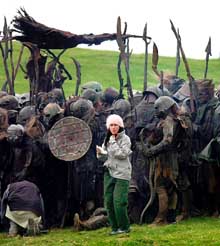 Porirua fans get Rings side
18 SEPTEMBER 2000

Lord of the Rings fans in Porirua are getting a rare glimpse into big-budget moviemaking.

A spokeswoman for Lord of the Rings production company Three Foot Six said a small "break-off unit" was filming some "pick-up shots" at Whitirea Park over the weekend. However, by this morning the film set had swelled.

Three large marquees, eight freight trucks full of gear and several security guards this morning watched over 100 actors dressed in costume filming what appeared to be a battle scene. No big stars were visible.

Film set manager Peter Tonks refused to comment on how long the set would film in Porirua. The company's Whitireia Park Board filming permit expires on Thursday. The park is open to the public during filming.

Click here for a much larger, if fuzzy, version of the pic above.