Xoanon here with a little special item I like to call 'LOTR Urban Legends'. We here at TORN get a whole lot of email daily, in fact many of us get the same emails, spymaster@theonering.net for instance reaches many staff members. Over the years we've seen all manner of rumor or silly prank hit the net, and when they do the information spreads like wildfire and suddenly we are bombarded with hundreds of emails on the subject. Here are a few that keep rearing their ugly heads at least once every six months.

Bush and The One Ring 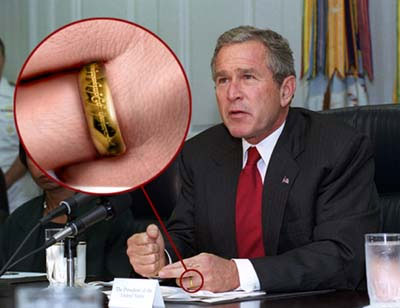 This clever little bit of political satire has been spotted in protest lines and on countless websites. Where it came from and exactly who created it we don't know. Emails with the subject 'Frodo has failed' will more than likely contain this image. We get waves of emails with this image from time to time. Needless to say, Bush and his politics are not something we cover here on TORN, so no flames please :)

We have also, unfortunately, all seen this odd little video featuring Spock himself singing a song about Bilbo Baggins. If you haven't had the pleasure...click here.

This legend, beyond all others, has caused more excitement with fans than almost anything else I've ever seen. The folks at lathamfilm.com, a digital production house, pieced together scenes from other films to create an apparently realistic looking trailer for a film called 'The Hobbit'. Supposedly starring Ian McKellen, Ian Holm and directed by Peter Jackson, this film was set to be out in 2006. Well folks, this ain't gonna happen. Sorry to disappoint! Click here to view the trailer. [More]

Last 2 Pages of the ROTK Script!

Well, not really no. These 2 pages seen here are in actuality an April Fools joke let loose on the public. Without any explanation, these images sit on this site and are allowed to excite fans far and wide. Well this one isn't true either. It's all in fun.

Viggo Mortensen Not The First Aragorn?

Not really an urban legend, but more of an email topic that just won't die. Waaaaaayyy back in 1999 TORN was the first site to report that Stuart Townsend was set to play Aragorn. Ironically we were also the first to report that a week after principle photography had started, Townsend was off the picture. Viggo was quickly sent in as a replacement. Try looking in our archives from 1999 for more news on this.

Well, there you have it, it really does seem like LOTR has permeated deep into the pop culture psyche if it can create such legends that are seen (and *gulped* over) on the TORN message boards from time to time. Not to mention the emails...the countless emails...