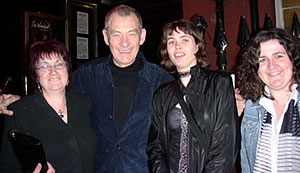 I must confess to choosing to see “Dance of Death” because of Ian McKellen and Frances de la Tour, rather than because of the play. I have barely heard of Strindberg - despite him being, according to the programme notes, Sweden’s best known playwright.

However we were in for a treat. The theatre was half-empty - the balcony and upper circle, where we had tickets, had been closed and we were upgraded to the dress circle. That and the stalls were in fact full. As we sat down, the set (an amazing circular room, complete with a staircase, windows, doors, and a wood-burning stove), was lit and Ian McKellen already on stage, seated with his back to the audience. After a few minutes, Frances de la Tour wandered on, and wandered around, so that when the action started it was seamless.

McKellen and de la Tour play Edgar and Alice, a couple celebrating their silver wedding anniversary. Though “celebrating” is perhaps not the right word - they hate each other, and their lives are a constant sniping and mocking. Edgar is a domineering military man, but not a very good one. He has never been promoted beyond captain, and hates to be reminded of the fact. He drinks too, and smokes a cigar. Alice, meanwhile, is bitter and angry, feeling that her husband robbed her of a career in the theatre.

Their lives together take on a new dimension with the visit of Kurt, Alice’s cousin. Kurt, played by Owen Teale, does his best to be sympathetic to them both - when Edgar falls ill with a heart condition he runs for a doctor, and then stays up all night with the sick man. But the oppressive atmosphere of the house preys on him, and by the second act Kurt too is as full of hate as his hosts.

Indeed towards the end of the play it is difficult to know which character is evil, and which good; which in control and which falling out of control. The alliances of Alice and Kurt, and Alice and Edgar, switch and turn. Edgar, an inveterate and gleeful liar, manipulates the other two with his imminent death. Alice plays with Kurt’s emotions, but seems to be losing her grasp on sanity. Kurt does not know who to trust, what to do.

The play is full of black humour and has some very funny lines as well as some very poignant moments. The adaptation keeps the original setting of a century ago, but the situation rings true to a modern audience. And it is superbly acted - the principal trio magnificent. Were it not for the voice, it would be difficult to say that McKellen’s Edgar is performed by the same man who brought the world Gandalf, Magneto, Richard III, James Whale, and so many other remarkable men. In movement and mannerism he is simply wonderful.

McKellen is matched by de la Tour, who makes you feel for Alice while at the same time questioning whether she is any better than Edgar. Teale compliments his colleagues admirably.

“Dance of Death” is an excellent play in every sense, and it seems a real shame that the theatre was not busier. It’s still on, for nearly a month until McKellen returns to Middle-earth - and I would advise anyone who can to go and see it.

After the show I and my three companions, all of us keen TORNadoes, headed round the side of the theatre to the stage door. There were three people already waiting and a few more turned up, but it was a small queue. We waited, and we waited, and we checked our watches and tried to remember when the last tube home was; we waited some more and reflected that it was a shame we weren’t going to get to meet Sir Ian after all.

And then, just as we were preparing to go, he emerged! I whipped out my camera, and after Sir Ian had signed autographs for those ahead of us, it was our turn. Being obsessed we’d sent him a card ahead of time, and it turned out he had not only got it, but remembered and realised who we were! Then he happily posed for a picture (l-r, River Woman, Sir Ian, Frogmella, Trinity the Purple), and signed our programmes. I might never use that pen again ... We all came over rather giggly, despite having resolved to be mature and grown-up, but he was extremely nice. He asked us where we were from, and when we told him said, “Oh, that crazy bunch!”

Then we thanked him and hurried away to catch the tube, squeaking like mad things and generally completely over-excited. Such a nice, friendly, ordinary man. Amazing.