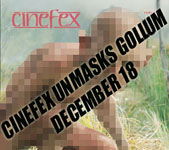 Gregg Shay writes: Below is information on the upcoming Cinefex, devoted largely to The Two Towers, which we think might be of interest to you and your website readers.

We hate to tease you with a partially obscured preview of our cover; but to preserve the magic, Peter Jackson has personally asked us to withhold our exclusive cover image of Gollum until the film is released.

Cinefex, a quarterly film magazine devoted specifically to visual effects, has announced that the publication of its winter issue, featuring an in-depth article on the making of The Lord of the Rings: The Two Towers, will coincide with the film's eagerly awaited mid-December release. The 48-page cover story details the groundbreaking work by filmmaker Peter Jackson and company in bringing this second installment of Tolkien's trilogy to the screen. Included is detailed information on the design and execution of Gollum, Treebeard and numerous other fantasy characters that figure prominently in the sequel, as well as a scene-by-scene analysis of the effects work culled from more than 35 interviews with Jackson and his Academy Award-winning visual effects team. Also included are 56 color photographs -- effects images from the film and behind-the-scenes shots -- many exclusive to Cinefex.