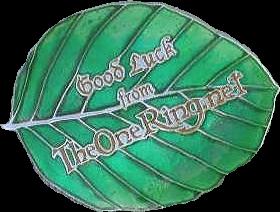 When I fist called Paul Badali of Badali Jewelry with the idea of making a pin for the Oscar nominees, I never thought in my wildest dreams we'd see them wearing the pins live on television. 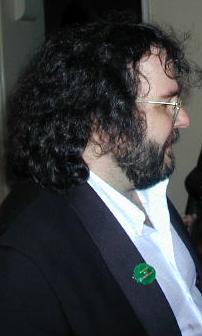 During our Oscar party Randy Cook walked up to me and apologized for not wearing his pin, saying that he was extremely nervous for the Oscars and forgot about it on his hotel dresser. Jan Blenkin, Peter Jackson's personal assistant rushed up to me just before getting into her limo and begged me for a pin, I of course obliged (I hope you get yours soon Jan!).

Many people have been asking how, when and where these lovely pins were made, so Paul Badali send us this in-depth description.

Here are some of the missing details. When you contacted me, you asked that the leaf be more of an oval shape than a "T", with a small stem at the base, with gold and light green colors rather than dark green, with the inscription "Good Luck from TheOneRing.net" 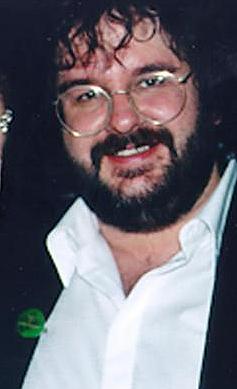 I have been planning to design and offer an Elvish leaf broach for quite a while like the one The Fellowship received from Galadriel and the Elves upon leaving Lothlorien. In researching Tolkien's description of the broach, I found it described as a "brooch like a green leaf veined with silver" and the best described when Legolas, Gimli and Aragorn discover the broach dropped by Pippin in the grass as "like the new-opened leaf of a beech tree - the brooch of an elven cloak". The European Beech leaf is an oval shape and new-opened leaves are of a light green color. So this is the type of leaf I used in designing the clip for the Academy Awards; the European Beech. 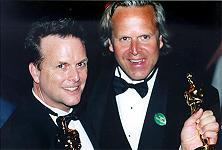 I was able to print of the Logo you use for TheOneRing.net off your website, and sketch that into the design on the leaf. Once I had the entire leaf design and script drawn up to my satisfaction, and correctly sized, I had the design photo-etched into copper. The 3 dimensional but flat design was cut out of the copper sheet, and then molded in silicone rubber. Waxes injected into the rubber mold were then bent into the curved shape of the leaf. Separately, I had the "copyright" info. and "limited edition" info photo-etched into copper, molded, and injected in wax. The wax leaf and wax parts with the writing for the back were then all assembled into 4 complete wax originals. I cast 4 originals, so we could use the best of the 4 to create a final silicone rubber production mold. Waxes were then injected into this final original mold, and each piece hand numbered in the wax starting with 001 up to 36; the total number of raw castings made up so far. Four of these first 36 cast in silver were rejects; so 32 were available to have the clip soldered onto the back, get polished, and be finished with the colors applied to the front. I will be recasting the 4 reject numbers, and more leaf clips up to 100; the total number this edition is limited to. 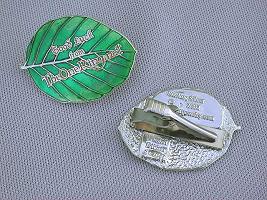 We are using a high-tech epoxy based enameling system called DurEnamel to put the beautiful colors onto the front. Rather than high temperature melting of glass (enamel) onto the front of the brooch, DurEnamel mixes up like epoxy and only requires 150 degrees for 2 - 3 hours in an oven to cure to a glass-like finish and hardness. The green in the leaves was done in 4 steps starting with the darkest green colors along the veins first, and finishing up with the lightest transparent green last. The final coat was the gold DurEnamel in the letters. All of the colors were custom mixed to achieve the desired results.

20 finished clips were shipped to TheOneRing.net to give to the folks who produced this phenomenal film. All of us at Badali Jewelry who participated in the creation of the clip got one to keep ourselves also. So there are about 70 left that we can sell for $250.00 each to anyone who would like a beautiful collectable piece of history

(look for more information in our shop section soon! -Xo). 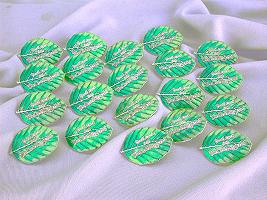 Xoanon here to pick up the rest of the story. The pins were shipped to our publicist Asfaloth in Los Angeles. TheOneRing.net was invited to the New Zealand Embassy party at the Beverly Hills hotel the Friday before the Oscars. Quickbeam and Asfaloth attended the event and presented the pins to Peter Jackson, Ian McKellen, Orlando Bloom, Sean Bean and many many others who were there (look for video and pictures of that event soon!).

When Peter Jackson, Mark Ordesky, and Jim Rygiel wore their pins to the Oscars, we were beyond excited when we saw them on the screen. And the press was quick to pick up on our story.

Hollywood.com: 6th paragraph: "Director Peter Jackson showed up wearing a leaf-shaped enamel pin for good luck, a gift from fans of his films."

LA Times under 'Lucky Charms' 2nd paragraph: "Peter Jackson, too, showed off a lucky green leafy pin on his lapel..."

Stuff.co.nz 3rd paragraph: 'As Rings director Peter Jackson looked on, wearing a special pin for luck on his jacket, the film took the award for best makeup, accepted by Richard Taylor and Peter Owen."

ODT.co.nz 2nd paragraph: "As Rings director Peter Jackson looked on, wearing a special pin for luck on his jacket..."

Seattle P-I 3rd paragraph: "Peter Jackson, director of "The Lord of the Rings: The Fellowship of the Ring," wore a lucky pin."

Thanks again to Badali Jewelry for all the hard work!

Thanks to Lady Xoanon for doing the research!