The cool folks at Cinefex Magazine have sent us an advanced copy of the latest cover, featuring Sam and the Cave Troll! Take a look: 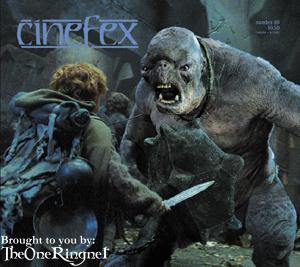 Be sure to check out the comprehensive Lord of the Rings coverage in the upcoming Spring issue of Cinefex, due out on March 25. The 56-page cover article contains an authoritative account of the special effects behind this extraordinary film, following its development from conceptual phase through production and postproduction. Culled from some forty in-depth interviews with key contributors -- including director Peter Jackson -- the story features detailed information on production design, makeups, costumes, props, model and miniature work, plus the cutting-edge digital effects responsible for so many of the film’s memorable images. Accompanying the spread are more than sixty color photos ranging from behind-the-scenes shots to never-before-published effects clips. Cinefex can be found in major bookstores, on newsstands and is also available through the Cinefex website at www.cinefex.com.