Scorpio writes: I recently ordered a Cave Troll ToyBiz toy from kbkids.com. The overall quality of the toy is amazing! Very good for a mere $20. He comes with two weapons...of course the two from the movie. 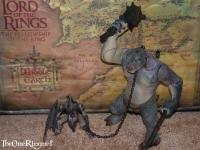 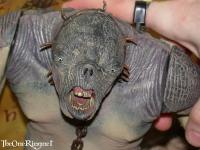 When performing these attacks the troll opens his fierce mouth and lets out 1 of 3 troll sounds. The texture of the troll's face and torso are very realistic (as realistic as you can get for a troll). This is a must-have for any toy collecting Tolkien fan! Bravo ToyBiz!