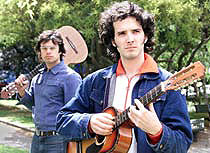 Frodo Baggins writes: Figwit a.k.a. Bret McKenzie and his partner Jemaine Clement just performed at the Aoteaora New Zealand TV2 International Laugh! Festival as the Flight Of The Conchords.

Supposedly they are New Zealand's 4th most popular guitar based digi- bongo, acapella-rap-funk-comedy folk duo. They are becoming increasingly popular here down under and their one hour performances are quite an exception: really good jokes, delivered in folk manner which includes guitars and without any sexism. They make you laugh and think at the same time.

However, this time their performance lasted only about 5 minutes and it was about robots and how they took over the planet.. quite unique and the audience was quick to laugh. But the best moment was Bret singing in bits and bytes: zero, zero, one, zero.. beautiful voice.. and as sudden as they begun it ended. Too bad as the rest of this Laugh Festival was not half as entertaining though they claimed to have the best people of this country in that hall. What
ever, we now our folks. See ya next time, Conchords!"