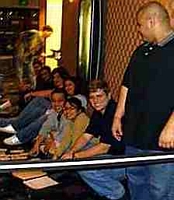 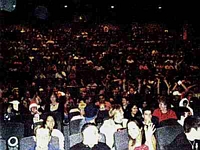 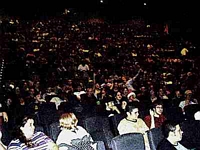 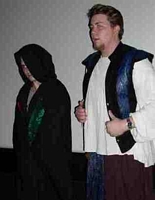 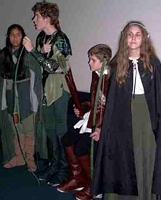 Attached are pictures from the Houston Line Party! What a blast! We had nearly three THOUSAND people show up for the opening. By way of comparison, last year the same theatre sold out the three largest theatres in the 30-plex to around 1600 people, using only two prints of the film, and we could get no media interest at all. This year they had five prints of the film, they sold out almost 8 theatres to over 2900 rabid Tolkien heads, and we had news crews from TWO television stations show up to film the line! 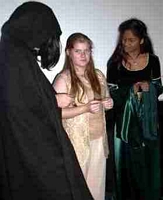 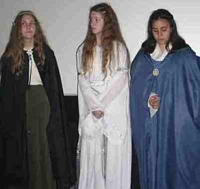 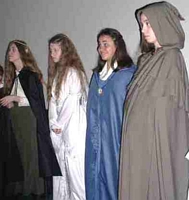 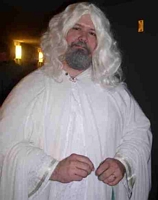 Thenamir is "yours truly", dressed in my best impression of Gandalf the White, and I was in charge of the festivities for the Houston line party on TORN. We gave away all the posters, action figures and collectibles you see on the prize table pictures, donated by the Barrow Treasures website including a Treebeard action figure, and the new TTT CD Cardz donated by Serious USA. How did we give them away? Tolkien trivia -- First one in the audience to show a hand and give the correct answer to some simple trivia. We also did an expert version of trivia for those who considered themselves Tolkien scholars, "Last Man Standing", in Spelling Bee style -- answer the question correctly and you stay in the game -- miss one and you have to sit down. The last one standing got the Treebeard figure! 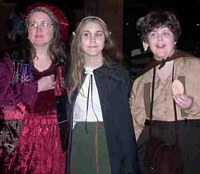 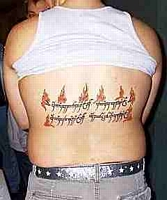 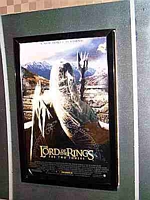 We also had a costume contest for a complete set of CD Cardz, Won by the young man dressed as, you guessed it, Legolas, and an impeccably detailed replica of his costume it was. There were a bunch of hooting guys who wanted one of the pretty girls to win, but in the end, the Legolas groupies won out in the audience-applause-meter judging. 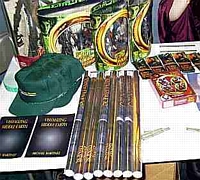 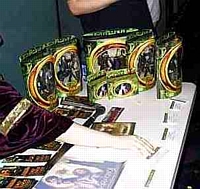 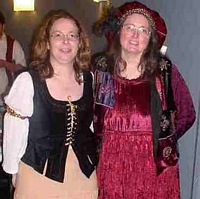 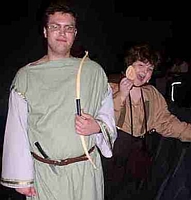 The movie, well, there's not much more to be said that hasn't already been said. We laughed a little (Go Gimli!) we cried a lot, and left the theatre stunned. My stock answer to those who ask me how the movie was (with no spoilers, of course) is that "it's the best three hours I've ever spent having all my senses and emotions pummeled and bludgeoned into utter exhaustion". I've never been so affected by a movie before - even FOTR doesn't begin to come close. Don't wait for the lines to die down if you have not yet seen it -- see it in a theatre packed with people you don't know and share an amazing 3 hours with them. You'll come out of the theatre as family.