I am told that this is the largest LOTR fair in Europe this year. Obviously the news spread quickly inside the Tolkien societies and the Danes at barlis got together and arranged to go as a group. Ant, MouthOfSauron and Greeny were the Danes that went and had a peek.

We decided to go on the Saturday. It was a frosty day and after standing in line to get in for about 30 minutes we were all freezing. The entrance was about 9Euros per day. Fortunately a show was arranged out in front of the building. Suddenly a huge Cave Troll appeared and started following people around. Especially the children got the fright of their lives.

So did Greeny when the cave troll lingered at bit too long in front of her and poking her arm…arrggh! When it seemed that all hope was lost a brave Rohan soldier came charging out the main door to the rescue. He drew his sword and fought bravely although the cave troll did smack him about good old Moria style. Obviously the brave soldier defeated the beast and they spent the rest of the day sneaking up on people and scaring the living daylight out of them…

The cave troll eventually got too hot and took off his costume, wandering about wearing only the legs and causing a lot more distress doing so.J

Inside in the warm sports stadium there were lots of small stands. Anything to do with LOTR was represented. We pondered around the place to have a look. The indoor sportstadium was filled with small stands with white banners covered in Dwarf writing. Having no idea that there were actually so many LOTR accessories, it was quite breathtaking.

Many shops and societies came out from under their rocks to show their skills.

At the far end there were make-up artist selling all kinds of latex face stuff. Ears, noses and chins turned people into fair elves, cute hobbits and nasty Sauruman orcs. It was free to be painted, but one had to purchase the ears. It was tempting to go for the nasty orc look but we did have to drive home afterwards… never orc and drive

There was an arena where the local role-playing groups had swordsmen who would arrogantly dare you to challenge them. Calling people names and laughing out loud when they declined. Obvioulsy many were tricked by the reverse psychology and some of the fights were worth watching. It’s always impressive to watch someone with only one sword, defend themselves from someone with two. The person taking the challenge were clad in heavy iron mail and amour making the game quite safe even though it looked violent at times.

Many role-plays were taking place. There was a large competition arranged over the weekend that required you had signed up to enter weeks in advance. Boards came out everywhere and dice and odd words filled the air. We know little of how the games are played, but words of approval and nods were made all around, when certain decisions were made and lucky numbers came up on the odd sized dice. We tried to get a quick note on the rules, but had to give up understanding it. Feeling old and grey we left the games knowing that 7 years olds outsmarted us by many leagues. On the last day of the fair the RP “cup” was to come to an end and the winner be declared.

Amour seemed to be the thing to get. Many small stands with all kinds of leather garments, mail and swords were everywhere. People bargained and tried on capes and cloaks. Swords were weighed and fur coats, embroided with pearls, shiny metal and golden details were looked upon. I still can’t believe the weight of a grown mans mail. That on top of gloves, helmets, leather vests and belt… once you fall down, you never get up again… Narsil, Sting and many other swords hung on the walls and all kinds of orc costumes, gloves, crowns, axes, masks, wands and wigs were more than the eye could digest. Obviously we had to go and touch and try on lots of the stuff. A chance to carry Sting or smell the inside of the hundreds of latex masks, where too large a temptation.

The fine details and talent of the people making these things are beyond any of us. It was really impressive. But so were the prices. I was offered a dark, heavy leather coat with straps and metal beads and all the works. With that came shiny metal shoulder protector thingys that you also strap to your chest and a helmet at the fair price of just 425Euros. Obviously I did haggle with the German sales person and argued I should have a discount knowing if I wore this I would not be able to breathe and much less swing the sword that went with the costume. He nodded and showed us some female leather clothing instead only to learn it was twice the price… J

Books and games where also available at the stands he many bookstores had supplied. Signed books and computer games where auctioned and bids where written down all day. About 8 computers and playstations where constantly crowded with young boys arguing, who was next in line to try out the new TTT games. Those games being the best seller Christmas gift this year it seemed by the number of mums buying the CD’s while the fathers and sons admired the swords and crossbows.

There were also competitions to attend. A small version on Bag End had been built with Bilbos front door and hobbit games inside for the children. Basically children threw all kinds of vegetables into baskets of different sizes and shapes and doing so gaining points. The one with the most points at the end of the day won a prize. So leeks, carrots, cabbages, onions and of course mushrooms filled the air…even a few bananas ended up in the baskets. Inside Bag End there was an ongoing drawing competition and also a prize to be won there. Personally judged by Bilbo the following day. The kids, many of them dressed up as hobbits, kept their minds focused on the job at hand and lots of wonderful drawings were displayed as the day passed.

Then there was the miniature painting… or painting of miniatures. Metal figure ever so small where painted and displayed. Large landscapes had been built and these wonderful, little figures had been arranged to make out the scenes of FOTR and some from TTT. Hours could be spent looking at each tiny detail and admiring the handy work and patience of the artists. Since none of us are neither patient nor handy, we watched, as some of the people managed to spread the almost invisible drops of paint like magic on the tiny horses and men.

Travel agents had also seen a customer opportunities. They had prearranged trips around New Zealand at prices around 1600Euros for 15 days around the Islands to see the places they filmed certain scenes and to walk some of the distance the fellowship walked. Beautiful pictures and tempting brochures made it hard not to want to buy a ticket and leave at once.

All this went on the first couple of hours while the TTT teaser trailer was shown on a huge screen at the one end the stadium where a stage had also been made ready for later use. Lots of loud music and the loud voice of Eomer: “What business does …”

Interviews with PJ and the cast where also shown on the big screen along with much of the music form TTT. All in all it was a cluster of men, elves, dwarfs, orcs and hobbits mingling about and looking at all the wonderful things. Hard to move at times but walking behind the cavetroll made it much easier to cover distance at a greater speed, making sure not to get hit by the spit he seemed to cough at people…eww.

The program included more than just the fair. At the far end of the stadium “the hall of fire” were full of chairs for people to go and listen to the Tolkien lectures. A huge fireplace burned gently in the back. At first a film was shown as a biography of Tolkiens life. It was real nice and warm to sit next to the fire and listen.

After the film a Danish journalist/ hobbit fanatic (Lars Terje-Lysemose) told us about his approach to LOTR and how he managed to get on set in NZ and write articles about the making of the film. He also read some of his favourite passages from The Hobbit and LOTR.

Then the large stage opened and the two chief designers Ben Wootten and Warren Many from WETA workshop talked for an hour about how they did the special effects to FOTR. The whole process of first drawing the sketches and building the small models to the fitting of hobbit feet and scanning the 3D models into computer programs was explained. They brought along lots of LOTR caps and shirts for the people taking part in the discussion.

Later on a trivia was arranged and books where to be won to the hard studying Tolkien fans, who could answer the questions. Pretty easy ones, so most of the people here should have come and claimed their prizes.

More lectures where given in the hall of fire, about 3D animation and computer graphics, but at that point we couldn’t stand up any more. We sat down to eat alongside the “bree” tolkien society. They are a small society who meet up often and do RPs and celebrate the many holidays in ME.

There is another day similar on December 1st. The program is a little different, but the same stands and activities continue.

Next year they will have an even bigger fair, so they say and we can all recommend everyone at Barlis to join it. For those who can read Danish or just want to have a peek the homepage is: www.ringenesherremesse.dk 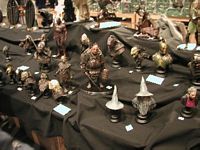 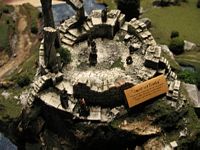 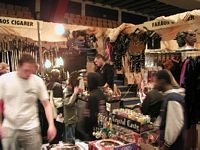 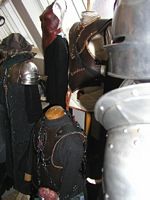 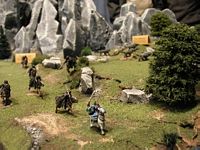 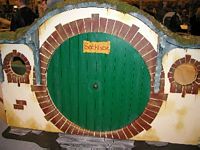 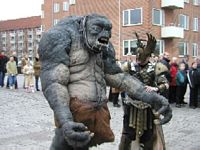 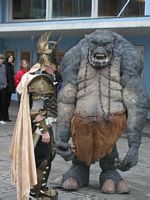 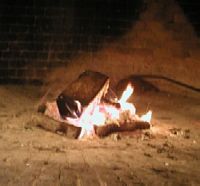 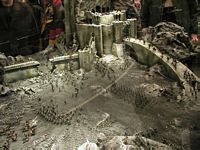 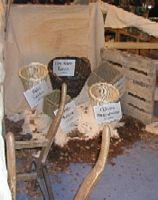 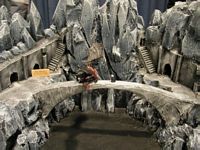 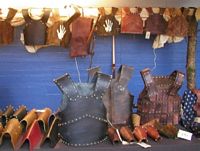 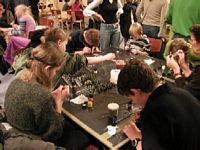 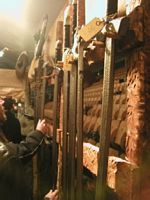 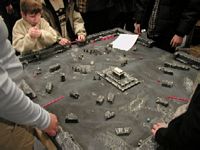 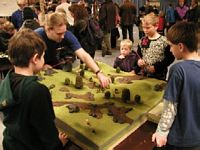 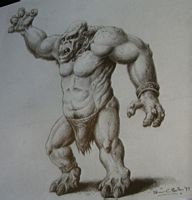 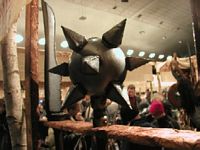