There is the spoiler about how The Two Towers opens.

Okay where do I start?

Mum and I arrive at the Playhouse an hour before curtain. Walk in with my bag of stuff for him to sign ect. Come in and see a big Silent Auction going on for the Playhouse. Lots of LOTR stuff. Signed posters, statues, DVD’s, shirts, and video’s all signed by Ian himself. I bid on a new Two Towers poster. My highest bid was $90, but by the end of the night I was outbid. Figures.

Anyway, mum and I go down to our seats. Front row I might add. Pretty sweet. 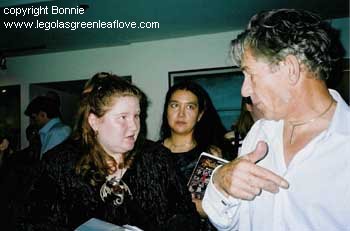 Come down the stage and see all these pairs of shoes on the stage. Odd. But oh well. Get settled in and everyone is starting to come. Full house, not a seat empty I suspect. Then I see on a little podium a Gandalf bobble head. LOL How cute.

Wait more then suddenly the light dims…. But you would think that Sir Ian would come on from backstage… oh no! LOL He comes running down the isle with a HUGE Union Jack Flag, wearing a ‘Frodo Lives’ cap, in a rain coat with sandals, and a green umbrella! LOL 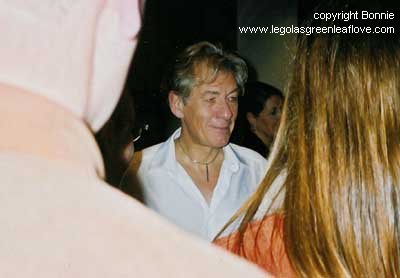 He runs around a bit and then he comes down to front row and passes me! *squee!!!* Everyone is clapping and cheering and I’m just like ‘OMG! There he is! There is Ian McKellen! Gandalf!’

One of the offers was “A night in bed!” by some man… and then…. THEN! Ian leans over to me and asks what that man said, because everyone was clapping so loudly and he didn’t hear… I told him “A night in bed.” MEEP!!! LOL I just said that to Ian McKellen!!! 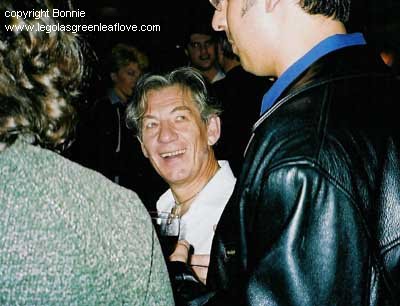 The show goes on and Ian performs beautifully. Really, this is one of the greatest actors of the 21st century. And man is he funny. I knew he had a great sense of humour before, but we were all rolling in the isles….

This was also a night to raise money for the Vancouver Playhouse and Ian then auctioned off the shoes he wore in the very end scene of X-Men. Some little kid in the 3rd row got them after his mother agreed to pay $200. Yikes!

Ian then takes some questions… I asked if I could get Orlando Bloom’s phone number… YES I REALLY DID! But unfortunately someone beat me too it. *sob* If he wanted to auction that off I would have gladly paid $1000 for it! *G* 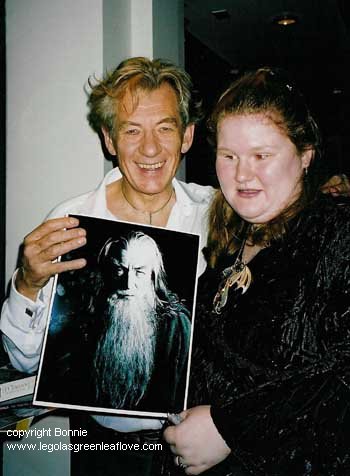 Ian then did some Shakespeare… this man was made for Shakespeare, yes he was. Then he proceeds to tell us about some of his acting then he took more questions…

By this time I am in awe of this man. Damn! Gandalf is 4 feet in font of me. *thud* Then… then he pulls out the book. Not just any book, but a book that has been a major part of my life since I was 14. Lord of the Rings.

He then asks if he should read. *rolls eyes* If he didn’t I might scream. But luckily many people agreed with me.

Ian then proceeds to read the first few pages of “A Long Expected Party”. OMG!! He does this so beautifully. I feel the tears well up. Yep, I’m a loser people, I cry when Ian McKellen reads Tolkien. 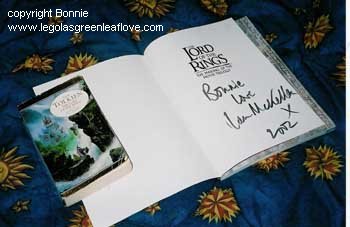 Then, he reads the last few pages of “The Bridge of Kazad-dum.” OMG!!! It was so powerful… so enchanting. I was crying… and when Ian read Gandalf’s lines… that wasn’t Ian up on stage anymore, that was Gandalf with a shave. Honestly. I felt I got a live performance from Lord of the Rings. God. Just… *thud*

I have hear Ian McKellen read Tolkien and I can say that I am now blessed to have witnessed it. This will be one of the best memories that I have had.

Someone asked if he was playing Dumbledore, but he said no, but Chris Lee was very eager to get the part.

By the end everyone was cheering and laughing, and when Ian left the stage he got a well deserved standing ovation. Taking his Union Jack flag, his raincoat, and his umbrella he leaves the same way he came in. On the way shaking my mums hand and saying ‘Thanks for being here.’ Meep.

Time for the reception.

Only the first six rows were in… *G* and I was one of them. Come in and see a lovely buffet and bar. Free everything. Yum. Lots of people come in.

Then Ian comes in. Smiling and laughing. This man has just put on a 2 hour show and he comes in shaking and saying ‘Thank you for coming’ to everyone.

He comes over to me and I almost faint. He shakes my hand and leaves to greet other people

Mum comes back from the bar, and we proceed to mill around. Met to nice young ladies who came all the way up from San Francisco. Wow… Mum and I just came over the 2nd Narrows Bridge. LOL

Alan Cummings comes in and gives Ian a big, big hug. I could hear Alan and he’s got such a delicious Scottish accent. Mmmmmm but not as nice as Billy Boyds. LOL

Mum and I mill over and Ian is by the buffet… I then get my moment….

I just blubber about how he is Gandalf and takes my arm… rubs it, says thank you and there is no need to cry, and that I will enjoy the second movie even more.

Honestly I thought I would pass out. He then leaves quickly again…. I still have all the stuff I want him to sign, but never fear…. *G*

But here is the part that blew me away the most… Ian McKellen, Gandalf himself told us all how The Two Towers open.

OMG!! I CANNOT WAIT! And I heard this from Sir Ian McKellen himself so unless PJ changed something at the last minute this is how the movie will begin.

After mum and I mill around…. And ton’s of people comment on my necklace. Thank you Daisy, it was a big hit.

People then start to horde around Ian for pictures and autographs. Poor guy, but he does it with a smile.

I asked him if he would sign all my stuff… (and I did have 9 things for him to sign) but he told me to come back later, but he promised he would sign it all, then he smiled and went back to others.

Mum and I mill around a bit and it starts getting late. I guess this is it.

I go over to Ian again for my things to get signed. He is still signing things for people. A woman kept buzzing around taking pics and stuff, and she whispers to me “Don’t worry I won’t let him leave until he signs all this for you.” I guess she was his agent or for McKellen.com or something.

I have all the pictures and books that want layer out on the table… and Ian rushes over to sign them all. He said thank you for putting the names of the other people he was signing for on the photos.

He then signs the very first copy or rather the very first Tolkien book I ever bought myself when I was 14... He even drew a little Gandalf toon. *G*

The I thank him for about the 400th time… *G* I show him my LOTR tattoo’s!!! EEEEE!!! He put his hand on his chest and said ‘You are really mad!’ In that delicious British accent… OMG!! LOL Elijah said I was crazy too!!!

Then my mum says that I’ve seen LOTR 32 times…. He just looks at me and says ‘Take it in steps dear and slow down.’ LOL Okies… But then he laughs… AND HE TWEAKS MY NOSE!!!! IAN MCKELLEN JUST TWEAKS MY NOSE AND SAYS ‘You’re a doll.’ *thudthudthudthudthud* And Now I can die happy… although I must meet Orli first.

Mum tells him that I am in love with Legolas… Ian just blinks, looks at me, smiles and says in such a matter of fact voice ‘Well who wouldn’t?’ *dies* Really, really makes me go ‘guh’. Mum and I also say we like Viggo and Karl. Ian smiles and says ‘Yes I really love Viggo, he’s great.’

Mum takes my pic with him… and yeah… OMG!!! I am just freaking at this point!!! Gandalf… in the flesh!!!

He tell me and my mum to enjoy the 2nd movie… yeah right… it’s already #1 on my list and I haven’t seen it yet. And that was that!!! EEEEEE!!!! I grab a few more pics of him and then we leave… Half the crowd has gone so I think it was ending.

He really was one of the most sweetest, gracious, and charming men I have ever met. Down to earth but he also had this regal feeling about him. Really sweet. And he signed everything for me. That was special. He had every right to say no, but he did. He could have said no to anyone, but he did. He tried to meet and have a conversation with everyone in the room. He didn’t have to. For this he is one special guy who loves people. Really awesome. He did not let me down in the least. This night has been like a dream to me and I know that I will treasure this forever. Thank you Sir Ian.

I will have pictures of Sir Ian and myself tomorrow