Today was the District of Dark Whispers Fan Club Branch picnic in celebration of Frodo and Bilbo's birthday. I was told you guys are interested in what goes on in the LOTR fan club world, so here is my report of the event and photos.

The unexpected happens when least expected. We get to the zoo and what happens? The zoo was celebrating Hispanic Heritage Month.............it was jam packed. But we did find a picnic area that worked. Problem was, the parking lots filled up, so District of Dark Whispers members were having a heck of a time trying to get to us. Our members found a way though. 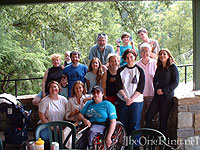 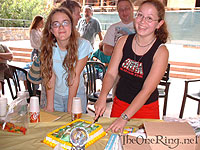 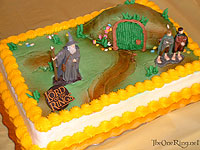 Members that attended our pot-luck picnic: Kyra, Blaze + the Gaffer, Neil + his son, Aggie, Tom, Cozy, Beryl, Kenny, Sean + his dad, Lisa, Shay, Fran and Rachel. We also had guests Jennie and Tibby. It was a great party! Blaze and the Gaffer brought an awesome cake, it was Bag End decorated with Gandalf, Frodo and Sam figurines. Before we cut the cake though, we did a Secret Hobbit gift exchange. Members exchanged gifts like Lord of the Rings action figures, bookmarks, key chains and books. It was a ball! We were going to hold a poem contest, but Blaze and I were the only ones that wrote anything, so we canceled it.

Then, the ultimate surprise. I was presented with the Academy Award of LOTR fan club branches, ³The Quest for the Ring² Nazgul sculpture. So again I thank all my members, I love them all:)

We were there for almost four hours, the time just flew by. It was a lovely day and it did not rain like was predicted. We all had fun and hope to do this again.