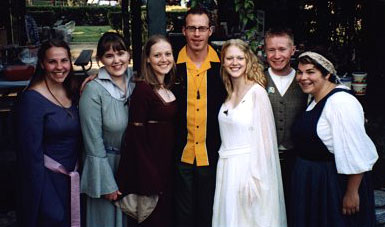 I’m the director of a musical ensemble, Vis Sit Tecum Musicorum and we performed at the Bowlmoot fan picnic that took place on Saturday before the Hollywood Bowl LOTR concert. We had already been planning on coming to the concert and, when we later found out about it, Bowlmoot as well. On a whim, I wrote to the organizer, Josh, to tentatively ask if we could bring along some instruments to serenade the picnickers as they ate. The idea went over really well and, to make a long story short (too late!), we became the official musical entertainment for the picnic.

We drove all night to Hollywood from Salt Lake City, Utah - our own Journey in the Dark in the Grey Pilgrim and the Lurtz-Mobile - a couple of days before and had a wonderful time frolicking at the beach and experiencing the amazing Getty museum. But of course the goal of our quest was to attend the Bowl concert on Saturday.

We arrived early to set up and I had the pleasure of meeting Josh and Seb, very splendid chaps whose unveiled enthusiasm at having us there was incredibly flattering. While getting everything in order, we were approached by a woman named Carlene who said she was part of the committee that put together the fan Oscar party this past spring. She seemed delighted at the prospect of the live music and mentioned they had wanted to hire a band for next year’s Oscar party, but how great it would be to possibly have real fans play. “Don’t you want to audition us?” one of my group asked. “Hey, this is Hollywood and you LOOK great!” she joked, as we were all wearing costumes.

After trying our best to tune the instruments (I don’t think they liked the humid clime), we played for some time and received generous applause and kind compliments from the crowd. It was thrilling just to be surrounded by so many fans. We met many interesting and nice people and had them sign our group travel journal. The festive atmosphere and all-around feeling of good will was contagious and it was apparent all were having a really jolly time.

Just as we were finishing up our set, Josh came by, quite appalled by our failure to visit the buffet, and insisted we go eat. The food was great - all the locals had really gone all out making sure there were piles of food; no one would go home hungry. As I was filling my plate with tasty eats, something caught my attention out of the corner of my eye - a TORNado bowling shirt! The figure turned around and the name stitched on the front revealed that this was none other than Quickbeam of GreenBooks fame! I had run into that Justin guy from American Idol the day before in Sephora, but this was infinitely more exciting. I mean, this was the intelligent, eloquent, and insightful *Quickbeam* himself - more of a celebrity to me than any temporary icon of pop culture. “Hey, it’s Quickbeam!” I think I said, both alerting my friends to his presence and catching his attention. “I loved your report of your trip to the set!” my sister fairly shrieked at him (referring to his “Where the Stars are Strange” articles). My impulse was to say something about how it was one of the best things I’d ever read on TORN or how wonderful it was to vicariously visit the LOTR set or that I cried when I read about his cat dying or. . . something, but I took too long to form a coherent sentence and then the moment for it seemed gone. Instead, I made him promise to have his picture taken with me later on when I had my camera with me. Quickbeam (or “Cliff” as he is known outside of Middle-Earth) was completely approachable and nice, just like everyone else I met at the picnic. He informed us he would be “slipping into a white wine haze” and, true to his word, he did seem to become happier and happier as the night progressed. In fact, a lot our conversation seemed to center around alcohol - how liquor stores are closed on Sundays in Utah, the joy of drinking with Kiwis, and the ever-so-flattering hangover picture of him that is on the website.

My sister was dressed as Galadriel in a splendid costume she made herself (and which had already won her a free copy of the DVD at a B&N event). At one point, a woman we had been chatting with before approached us with her 4-year-old daughter and told us she was dying to meet “Galadriel”. The girl, whose name was Moira, was a wide-eyed darling - surely she could be one of the “cute hobbit children”! - who was so shy she didn’t say a word to us all night. My sister was really cute with her though, bending down to her and quoting, “Even the smallest person can change the course of the future.” We sat behind them during the concert and my sister continued to make eye contact and throw her occasional smiles, which made Moira blush and hide her face in her mother’s clothes.

While everyone else was gathered together for games and the raffle, Quickbeam took the opportunity to nip over to the dessert table to snap up the unsuspecting sweets. Seeing him alone, we boldly and brashly interrupted his sugar raid. He was extremely sweet about it all, speaking on a tape recorder I brought along for an absent friend (a very kind and amusing message) and patiently posing for the promised picture, even when it took far too long for us to arrange ourselves around him!

As the picnic wound down, Josh got up to make a few announcements and thank the organizers and sponsors - and he made special mention of our music group. Something to the effect of, the party was good to start with, but the live music made it *great*. Everyone whooped and hollered. Aw shucks, thanks!! As people began to leave to go to the concert, the organizers started to give away the food. They unloaded a lot of on us, telling us we’d need trip food for the ride home. (It sustained us beautifully across the desert - thanks, guys!) If I’d left right after the picnic, I still would have had one pretty spectacular evening - but there was still the concert to come!

Though the bulk of the suite is what we hear on the CD soundtrack, Shore has proven himself a master composer (again!) by how elegantly he brings it all together. As a rabid fan of the film and someone who literally listened to the soundtrack all day long for several months (an office job has its advantages), it can be difficult to disassociate the music from the film. Once that is accomplished, though, it is apparent that Shore has created an amazing stand-alone piece of program music.

As for the performance experience, there were imperfections to be sure - the acoustics at the Bowl aren’t the best, there were some rough spots that gave the impression a week or two of extra rehearsals would have been beneficial, and the boy soprano had some struggles (and why was the post-moria solo re-written for a boy soprano - why not stick with a woman soprano like in the film version?) However, the good certainly outweighed any small nitpicks; the soloist for “The Lament for Gandalf” was amazing and appropriately haunting; the percussion were having a blast with the oversized drums in the Moria section; Shore left in the last measures of the post-Moria music (after the soloist stops singing and the choir takes over - something sadly left out of the CD soundtrack); the transitional music we’d never heard before was lovely; and the new music, which I assume will be for the extended version, was a joy to behold. [BTW, the biggest segments of new music were located somewhere in Rivendell and before the Great River, assuredly the gift-giving scene.] I’m hopeful that one day when the 3-part work is complete (Fellowship, Two Towers, and Return of the King) that we’ll be able to not only hear it in its entirety live at the Hollywood Bowl, as promised by the conductor at the concert, but that it will also be available on CD.

The concert was amazing, but what really made it special to me was experiencing it with fellow LOTR fans. The enthusiasm of the section where the fans were sitting was unmatched. There was a kind of reverence emanating from all during the suite. Everyone’s ears seemed to perk up whenever unfamiliar music was playing, I’m sure I saw people actually on the edge of their seats during the Moria movement, there were plenty of sniffles when Gandalf fell and Boromir died, and at the end there was a collective sigh before we erupted into applause and gave a standing ovation. I was secretly hoping we’d get an encore - maybe Howard would have given a small piece to the orchestra that had been composed for TTT! Eh? Well, it COULD have happened. But... it didn’t. hm. Sad.

On the way out, we continued to run into fellow fans - there were several people I’m sure we said goodbye to 3 or 4 times. It kind of gave us the feeling it would never end, but end it had to.

Thank you to the organizers of the picnic (Josh, Seb, and Hannah - there may be more, I’m sorry if I don’t know your names) for putting together such a great party (I’m sure it must have been a daunting task, but you made it a success!) and for allowing us to be a part of it. I think LOTR fans must be some of the nicest people in the world and I look forward to mingling with more of them when we attend and, if all goes well (crossing fingers!), perform at the Oscar party this coming March!