Wednesday, August 28, 2002
What Happens When FIGWIT Comes Over? - Xoanon @ 18:54 PST
Ringer Spy Ahriell sends along this report with pics and a newspaper clipping covering all things Figwit.

Seems she managed to get good old Figgy to attend her DVD party! Take a look! 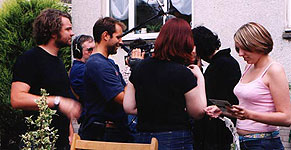 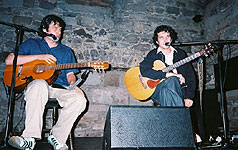 I enclose a copy of the article about Bret McKenzie coming to my lotr dvd party on the 17th of August, which appeared in the Dunfermline Press, a local paper in Fife, Scotland, where I live, just north of Edinburgh.

I am the founder of the Scottish fellowship, and organised a few dvd weekends for the release of lotr/fotr on dvd.

I was told a few months ago, by Skybly, that Bret mcKenzie, aka Figwit, would be in a show at the Edinburgh Festival Fringe 2002, in a comedy-folk duo called "Flight of the Conchords", so I did some research and found out where he was.

On friday the 2nd of august I went to see the show called "Folk the World". He was performing with Jemaine Clement at the Gilded balloon cave 1 in Edinburgh. The show was excellent, extremely funny!

At the end of the show I went to see them backstage and invited Bret to my dvd party on the 17th of August, he accepted, which was a huge and very pleasant surprise for me! 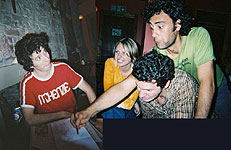 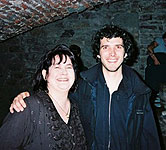 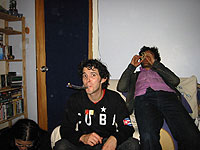 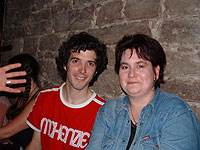 The dvd party went very well; we had a TV crew from New Zealand Channel 3 at my house filming Bret, me and other guests. Stan Alley was also there filming for his doco on the Figwit "phenomenon".

The article attached tells about that day!

I also enclose a few other pics from the party and my other meetings with Bret in Edinburgh:

The "4435" doc is a montage of 2 pics taken on Monday night (26 August), when taika cohen drew a portrait of Figwit for my book; in the picture are also TheRiverMaiden (Gemma) and Stan Alley.