Sunday, August 04, 2002
Comic-Con 2002 Report - Xoanon @ 22:30 PST
Niowen writes: I just got back from my second day at San Diego’s Comic-Con and as the point of my going was to see all the new surprises for LotR, I took plenty of pictures. Here are a couple of Sideshow~Weta’s set-up as well as pictures of various props which have been set up. 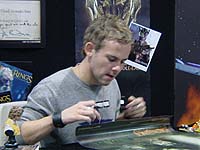 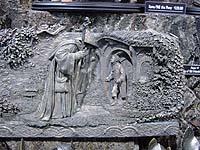 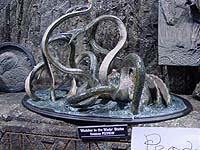 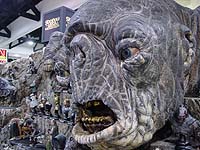 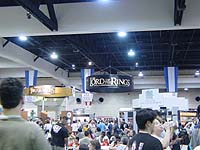 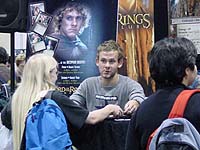 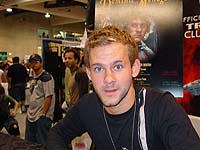 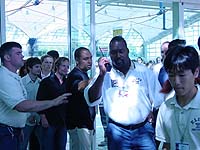 Can anyone say, “If only...” more than I can? I doubt it. After perusing the LOTR booths during Day 3 of San Diego’s Comic-Con, I got word of a rumor that Elijah Wood and Billy Boyd were on the top floor somewhere. Clueless where to go, I even asked Dom Monaghan as I got his autograph. He told me they were probably still in Ballroom 20, where the New Line Presentation had been. Pen and fan club cell in hand, I dashed up to the top floor of the Convention Center and after nearly 10 minutes of confusing directions from several employees, made it to Ballroom 20. No Hobbits there.

I caught sight of someone wearing a TORn shirt and asked them where I could find these elusive actors. He gave me the finally correct instructions that the three young men were signing autographs in the Sail Pavilion. As I reached the stand where they were singing I couldn’t believe my luck as the line appeared to be short, as I began to get into line I was told by a security guard that they line had been capped only 10 minutes before I had reached it.

I waited patiently by the line in case it might re-open but was told rudely to leave. I still waited. Soon, 20+ people started to stand where I was, frustrated that the line had been capped so early @ 3:20. A sign was posted up saying that their autograph session was from 3:00-4:00. Finally the over-stressed security guards shooed everyone away. Hah! Can’t get rid of LOTR fans, THAT easily. A few of us went around the back to wait for them to come out (I had given up on a signature, just wanted a pictures of my favorite hobbits). One man next to me had a fabulous Fotr teaser poster with nearly 20 signatures of EVERYONE from the movie. He only needed Billy Boyd’s signature. From where we were waiting, there was a glass wall with a curtain where Elijah and Billy were. They peered through the window several times and got one of their assistants to pick up the autographed poster from the man so they could complete his collection (just shows how great Elijah, Billy, and Dom really are). As soon as the poster was returned, Elijah and Billy made their escape in a flurry and body guards and personnel.