Kia ora to all at TORN. I am finally back at my computer after my trip to Wellington, and the Green Parrot book signing with Viggo. He arrived barefooted and gave the waiting people a big, but slightly shy smile. As others have written, he is a quiet, friendly, charming man and we had a good all be it short chat.

I told him I had seen him interviewed as "Aragorn" fresh from filming (with torn sleeve and blood!) on the news on TV1 NZ on the friday evening and he asked "oh how was it?" I assured him it was fine and and great to hear any news about filming on TTT, as well as the book signing. He asked where I had come from and I told him I had flown up from Dunedin, he raised his beer and said "they make this there don't they!" He told me about the Guy the funds from the book sales are going to, I asked him how filming for TTT was going and he smiled and said "fine". I asked if he would sign a couple of extra things for me, and as you can see by the photos he said "sure". He wrote Kia ora in his book messages, which is a lovely New Zealand greeting, and he shook my hand and said thankyou as I left. All too soon it was over but I am glad I got to meet him even if it felt rushed and I didn't get to ask him more about his paintings and photos. There was a great atmosphere while we were waiting out side, lots of people yelling out of their car windows asking what we were waiting for! and a few interviews and photos were taken!!

The books are wonderful and the CD with 'Recent Forgeries' is amazing, and he even sings!

While I was in Wellington I went to see where Weta Studios is (among other sites), and walking along the road was Alan Lee and another guy. I was not quick enough to leap out of the taxi and say Hi! 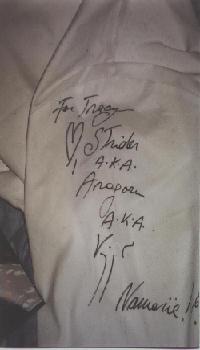 The article about the book signing in the paper was great except that I didn't actually say the things that they wrote!!