We said 'Meet at the Station'

First off, I royally delayed things by wanting to curl my hair. Not just any curls. Tight 80's reject hobbit curls. I had gone out the night before so I didn't put the pipe-cleaners in till the next day. I finally did get them done, late, and I looked like Kate Bush. In fact, I was walking around singing Wuthering Heights for most of the evening. What also took some time was sticking on the latex and hair on my feet. It had one effect I wasn't anticipating - the latex without makeup covering it made my skin look a sick kinda yellow. My feet were hairy though, so that's all I cared about. Looking like a right Ren-Fair Tolkien-reading D&D RPG playing wiccan unicorn loving drop-kick, (Yay Ren-Fair Tolkien-reading D&D RPG playing wiccan unicorn loving drop-kicks!) I went out into the big wide world with my Elven sister by my side.

We were an hour late, and poor Tintaglia had tried to page me on the train via the transport personnel. Funny thing was, they couldn't find me. Geez, I wouldn't be hard to spot. Just look for the folk-singer covered in flowers and with hairy feet!

We finally met up, exchanged hugs and waited for the others. Nobody showed up at the station. Go figure! So we abandoned the station and all went to Imax Cinema. 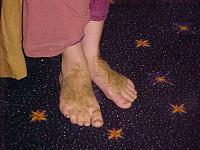 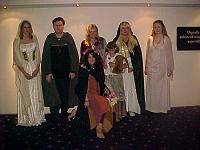 The Meet was on! We arrived to lots of hugs and smiles and exchanging of names. Eledhwen was looking gorgeous as Lady Galadriel, and Caerwen - we never figured out what she was cause she didn't say. To me, she looked like the Lady of the Mark. Her darling little daughter was done up as a hobbit as well, so I made sure I had a photo taken with her. Jeremy was the cause of much envy on my behalf; he had made himself a great little Fellowship brooch and wore the One Ring with a really long chain he got because he bought two rings. I'd be happy with one! Ah well, covet not thy neighbours possessions, I suppose. Just dream about them day and night in the hope of acquiring them! At last, leg_of_lamb (Romy) showed up, and we all shuffled off into the cinema.

Wow. Can you just say WOW?! The umpteenth time seeing and it still amazes me. And being on such a royally HUGE screen, it was a really great experience. My favourite scenes were even better, and man - you can see every piece of grit and every little speck on them when it's that huge! Amazing! The sound was deafening (Yay!) and it was nice to whisper about our favourite lines. (Eledhwen, to her credit, knew most of the lines word for word. Show off. :P) We even got told to keep it down, so I think it was a good time :)

After this fun, some of us parted ways. We had photos first, and documented the fabulous efforts people went to. As you can see, what a lovely bunch of people, and what a gorgeous Kate Bush look-a-like hobbit there! Eledhwen and I took five to do a quick hobbit dance, including the famous Frodo Funky Chicken (tm). I must say, for an elf, Eledhwen knows how to boogie!

After this narcisstic love-fest, (where I bossed people about a bit like Austin Powers on a photo-taking freak-out because the battery on the camera was failing me!), we all went to a cafe across the street to mingle with the people. We all got some appreciative smiles, and one person behind the bar asked me, "Why all the princesses?" which was cute. I informed him I wasn't a princess, in fact I was a hobbit, and the others were elves, and that we had been watching Lord of the Rings. A lot of people were very positive and encouraging towards our craziness, which was really nice. 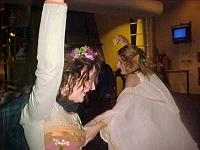 I took a couple more photos, and played with Caerwen's daughter's Frodo action figurine (I'd not seen one of these before). I was sitting there fiddling with it as I talked, and it wasn't till people started laughing at me that I realised I was looking up his tiny little jacket! Blush time! How embarrassing! Hehehe.
We began talking about The Two Towers, and how we wanted to be at the premiere here in Perth, but considering that most of the time the tickets are snaffled up pretty quick by people in the know, and we were most obviously not in the know, we decided that perhaps we would just go to the first screening at a particular Hoyts cinema in Perth. We will probably want to get a nice crowd together like we did today, so keep an eye out when the time comes because we'll wanna throw a party!

Our little group got smaller and smaller as people began to leave, and finally Tintaglia gave my sister and I a lift home. It was a really great time out, and to my credit, I went to bed forgetting about the hobbit feet, and they were still hairy the next day. Wow. That's a really good make-up job.