My group of seven, known as the Michiganders, arrived at the International Center for Photography at just after five and there was already a pretty good line.

Like us, most of those seemed to be from Billy Boyd's official website. We had traveled to New York to see Billy at ICON the next day and decided to make the trip to Manhattan to see Viggo when we'd learned he was appearing at ICP.

The wait seemed to fly by as we were overly excited at the prospect of seeing Viggo and with the fact that after months of talking to each other through Billy's site, we were finally able to talk in person. We were all pretty giddy and even the sudden rain shower that had us running across the street to buy umbrellas from a vendor didn't dampen our mood.

Once Viggo appeared, the wait seemed to get a bit longer as we were all anxious to get to the front of the line and Viggo was not rushing people through the line. Since the main reason for my trip to New York was to see Billy, I didn't have anything to sign and neither did Lava, another in our group.

Luckily, I'd brought my BB.Net Road Trip 2002 along with me for the other forum members to sign and so had Lava so Hawk, the photographer of the group, suggested we take the shirts with us to have Viggo sign. As we got closer and closer to the small table where Viggo sat, I became more and more pleased with the way Viggo was interacting with the fans. From my vantage point in line, I could see that he was taking time to speak to each one and didn't seem worried about rushing them through. And then, finally, it was my turn. I walked up to him and asked him if he'd sign my shirt. He smiled and said, "Sure, what is this?" as I handed it to him. As I explained that it was a shirt from Billy Boyd's official website, his eyes lit up and his smile grew. "Are you going to see him tomorrow?" He asked and I nodded. He then proceeded to write and write and write. 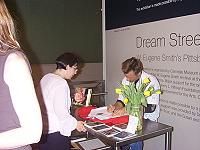 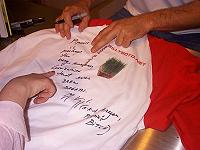 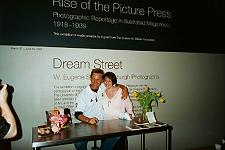 While he was signing my shirt, he asked if I would try to show Billy the message he was writing on the shirt and I told him I would do my best. When he was finished, he turned the shirt around and read me what he had written.

"Pippin is the very finest honorary Gondorian that ever drew breath. Viggo (AKA Aragorn, Pippin's Bitch)."

After we laughed about what he'd written, I asked if we could have our picture taken together and after he agreed, I stepped behind the table and posed for Hawk. As I thanked him and started to walk away, he stopped me and asked if I would do him a favor. I said yes (as if I would tell him no) and he said "Tell everyone that's going to see Billy tomorrow to put on your brightest lipstick and give him two kisses anywhere you want!" Like that's a hard task! I told him I would and immediately ran to Liz, another in the group and hugged her. The other members in my group finished up and we were ushered further into the museum, where the seven of us collapsed in a heap of euphoria. None of us could quite believe what happened. We not only had met Aragorn, son of Arathorn (and managed to NOT say those words to him), but he had turned out to be an extremely generous, nice person who gave us an 'in' with Billy the next day. After much giggling, I managed to get a look at Lava's shirt and laughed when I saw Viggo had written, "Billy Boyd is my master."

Fast forward to the next day. The Michiganders arrived for Billy's Q and A session an hour early to get good seats and somewhere along the line, I decided that Lava and I should use the Q and A as a way to let Billy know that we had messages for him from Viggo. She agreed and when the moderator called for people to line up to ask their questions, Lava and I were the first ones at the microphone.

The big moment came before I could think about what I was doing. With Billy looking directly at me (which was slightly disconcerting), I said, "My friends and I went to see Viggo Mortenson last night and Susie and I are now under strict orders from the King of Gondor to hand deliver these messages to you when can we do that?" To my surprise, Billy said "Now, I guess." And motioned for me and Lava to join him onstage. My hands were shaking but Billy managed to read the message, which he found amusing and then read it to the crowd.

Surprisingly, he left out the part about "Pippin's Bitch". I asked for and received a hug from him and walked off the stage, totally forgetting that Viggo had also asked us to give Billy kisses, but I would get my chance a couple hours later, during the autograph session.

Billy smiled as I handed him 'the' shirt and reread what Viggo had written, laughing again. He asked me how the signing was and I told him a little bit about it and about how Viggo seemed to take great delight in writing the message. I then grew bold and told Billy, "I'm showing a lot of restraint here, because Viggo also told me to kiss you." To my surprise, Billy stood and tapped his cheek, saying, "Well come on!" I kissed him and honestly, I don't remember much of what happened next (a bit of after kiss euphoria). What I do remember is that Billy Boyd, like Viggo Mortenson, was extremely kind and patient with his fans, as well as generous.

Thanks to Emma Abraham for the Billy pics!