I drove down from No. CA and stayed at the Motel 6 Hollywood late Sat. night. The parking is not so hot there - but I got in ok.

After checking out I went about only a mile over to a parking lot near the back of the 'Y' near the Hollywood Athletic Club and kept the car there. I did alot of walking the area and went up to the barricades across the street from the Oscars. I watched the preparations and the crowd slowly swelling to a critical mass. Security was seriously fierce there.

Being bored and hungry I want back about a block on Highland Av. and ate at the Mels Diner. The spread of street barricades had reached Mels parking lot soon after that point - police quite aplenty. Looked like some serious Oscar participants eating in the restaurant in suits and big ID badges - probably event staff or some big fish producers maybe?

I left there and went down the Walk of Fame past the Egyptian Theater away from The Kodak Theater area. I stopped and wisely bought some support sandals to go with my party formal dress (high platforms and spike heels? - no way! - they are killers!). I checked a couple of big newsstands on sidestreets between HAC and The Kodak - nothing new with the Variety mags or others that I wanted with LOTR theme on it - sort of redundant stuff.

I went back by the HAC and found the some TORn staff already there outside doing set up. I said 'hi' and made sure my ID requirements were all good. Knowiing I was in order I went back to the car - moved it to a shadier spot and did homework there as people started showing up. I listended to the pre-Oscar red carpet arrivals on the radio. Everyone was looking nice as the line got longer. I packed up the homework, dressed up and got in line too. Took a couple pictures outside while waiting. Eventually we were all admitted inside a few at a time.

I LIKE MY GOODIE BAG - Yes! The trip trouble, the wait & admission fee was already more than worth it right there. Remember me saying "hi" somewhere at that point to 'Tookish'? *yep* - then I went upstairs. Very nice job with the decorations and appetizers! FREE card game packets to help ourselves to - COOL! - *2 handfuls-yep* (my brother is sooo happy counting them now). 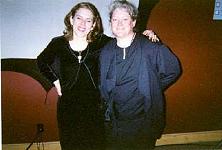 I milled around looking for a familiar face. I knew there was No. CA TORNado contingent around there somewhere, but I don't have thier faces with thier screennames *drat!*. I picked at some appetizers and mostly watched the TV for awhile in one room then the other. I ran into 'Rosie', who I remember from the Brentanos book signing.

Watched the TV. LOTR and PJ didn't get the Oscar for the 2 big categories *BUMMER* - so at which point everybody went outside to get air and such. I hung out for awhile out there feeling anticipation. Some of them would show up I knew in my gut feeling. I hung out in the press area downstairs for awile, trying to be discreet till I was told to clear out. I went back upstairs and hung out there. I sat in the big viewing room up front - it was important to be up front. Ultimately my patience was rewarded as the pictures will tell. 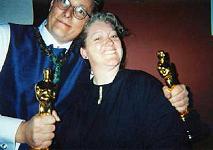 Richard Taylor was an amazingly nice guy and very gracious. He was near where I was and I may have been the first he hugged and allowed to handle an Oscar - but I can't be sure. That made my night right there. I moved away and hung about again. The other LOTR crew were quickly whisked away but R. Taylor lingered behind basking in his moment. The place was pretty cleared out by then. I went downstairs and flopped in a vacant easy chair *that felt good* and said "hi" again to 'Calisuri' lounging on the stairs nearby.

R. Taylor finally came down stairs hugging and allowing others to hold an Oscar. Then he just turned and saw me there. I waved and wished him luck. He totally didn't have to do this and I didn't make any move - but he came and kissed my cheek. *Whoah! - VERY NICE GUY!* Didn't even look for that one! Uh - yeah, my trip was good.

So I lingered about some more not wanting the party to end. I was starting to feel the exhaustion burn. I went to the car and undressed, got some gas and left the area. Started falling asleep at the wheel, so I slept at a Buttonwillow truck stop on I-5. Got home and crashed for a day. Back to the real world.