At around 11 we were given numbers to get into the discussion. I was 4, so of course I was seated up front. I was literally 2 feet away from Sean Austin, and sitting directly next to Phillippa Boyens. Before the discussion started and while the lucky 50 people were milling in, someone said "Look, Sean!" I looked, and sure enough there he was. I walked over with my LOTR edition Variety magazine that came out that day. He was really nice, and genuinely interested in the magazine as he had not seen it before, or even knew about it. (it has a beautiful picture of Sam and Frodo hugging on it) I thanked him for being a perfect Sam, and he thanked me for saying that and touched my hand. I had a huge grin on my face from there on out. 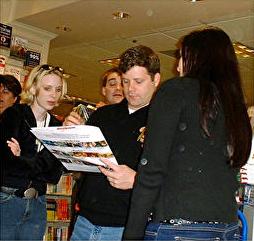 Di is the one with her back turned to the camera

The discussion started, (I know others have reported what was said, no need to reiterate, I feel) and it was hilarious, enlightening, and at times tearful. One fan comment that made me misty eyed was something to the effect of "Peter, thank you for bringing magic back into the movies" Fran and Phillippa had tears in thier eyes, and so did I. Amazing atmosphere in the room after that, you could literally "feel the love". Cheesy, yes, but true.

Afterwards I got my Variety signed by all of them, including producer Mark Ordesky, who happened to be there and who wasn't even signing with them. (He was seriously touched that I even wanted his autograph, but Dawn,the nice girl in front of me pointed out to me, and told him she knew how much he had to do with the movie being made the way it was. So true. Super nice guy, too.)

When I got to Peter, I was shy. I asked him if I could shake his hand, and I did, and then I said thank you. He said you're welcome. He also had not seen the issue of Variety that I had. He studied it, and then asked Fran about it. He seemed to know nothing about it. She said "Oh, yes, I pulled that shot." I told her it was beautiful, she thanked me, and Peter agreed. He went to sign the magazine with a black sharpie, then stopped. Everyone else's autographs had been in a gold pen, that Dawn behind me owned. "It really should be gold, shouldn't it?", he asked me. "Oh, it's okay, black is fine.", I said. "No, where's the gold one?" he asked. He waited a minute and she handed it to him. "Ahh, here we go." he said as he signed it. Then he handed it to Fran Walsh, sitting next to him and said "ere you go Fran, you need the gold for this one." Thoughts going through my brain at the time: PETER JACKSON CARES ABOUT WHETHER HIS SIGNATURE MATCHES THE OTHER ONES ON MY MAGAZINE!!!!!!!!! EEEEEEEH!!!!!!!!! AAAAAAAAUUUUUGH!! THIS IS PETER JACKSON!!!!!!!!!!!

It meant quite a lot to me to be able to thank him, and I will always remember that moment. Sigh.............it was great. Now I have to go frame shopping!