I had the privilege to attend this, my second show at Track 16, (I had seen Pierre Vinet's beautiful LOTR photo journey there in January) and I am very pleased to report Viggos works are wonderful, and well worth the trip. One of the pieces struck my spouse and I so much we purchased it. Temporary insanity aside, we also had the incredibly good fortune to run into quite a few of the cast members, take photos and chat a bit. The following is my probably much too detailed experience; now is your chance to hit the "back" button.

I first met Sean Astin, (Sam Gamgee of course) his lovely wife Christine, and most importantly the beautiful Miss Alexandra Astin, who will be featured ,in a very long time, as Elanor Gamgee. Miss Astin's spokespersons (Mom and Dad) confirmed that while the actress has not seen FOTR (too scary), she was hoping that when her screen appearance comes in ROTK perhaps she could catch just the last 10 (non-PG13) minutes of her film and actually see herself.

Unfortunately the filming experience was too long ago for her own memory, but as her Dad said, "We have the stills". She also does not speak with any Kiwi accent, which appararently was a great relief to her, as she worried with an accent, no one in the US would be able to understand her. She is a sweet and very pretty girl, and her Mom and Dad were obviously and justifiably proud.

Sean was kind enough to sign my movie theatre poster, and was very nice to compliment me on my custom (read: homemade) bag I had made to accommodate the whopping 27x40 sheet. Thank you, Sean. I had recently seen his film "Kimberly" and commented how funny it was to see his Mother (Patti Duke) pop up near the end, in the delivery room scene. He said they had a great time with the cigars in that seen. And yes, King of Nepotism that he claims to be, he had suggested his Mom for the role. I told Christine that she and Sean had looked wonderful at the Golden Globes and I sincerely hoped they would get to go to the Oscars as well. Unfortunately I wanted to take pictures at this point, however, I was keenly aware of no pictures being taken anywhere, and not being much of a rule breaker, I let it pass. Now of course I know what a fool of a Took I was.

Unbelievable to those inside the gallery, it was steadily getting even more crowded. Think: leaving a major sporting event and you have the up close, and personal feel of the place. Thank heaven it wasn't summer. 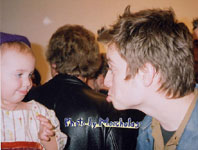 A very short time after that in walked Elijah Wood, whose "are those for real?" blue eyes and light complexion stood out in the sea of "in LA I wear black" mob. Next to him was Dominic Monaghan, with a large twinkle in his eye, and an energy that was very hard for him to contain and stay earthbound. They both seemed very thrilled to be there. These young men are still very much elated to be associated with LOTR projects and it's really wonderful and refreshing to see. As Bilbo once said, "He's still in Love with the Shire", I think these lads are still in Love with their movie. No one here would begrudge them that, of course. Cheers to both boys for coming, as Elijah later said that Sean had called him on his cell from the gallery, told him what a nut house the place was, and that he (Sean) was heading home, yet Elijah and Dom still showed up. How wonderful is that?

I first introduced myself to Dominic and asked him if he had seen his picture yet (it's featured in the shot with Elijah and Dominic in front of the wall). He hadn't , but wanted to know if it was the one with him holding the wine bottle. It was, and after short deliberation he confirmed that it was red, not white wine, but, unfortunately the vintage was not good enough to recall the vineyard name or year. Many lovely young ladies recognized him and praised his work and were richly rewarded with hugs, endless smiles and thank- you's . 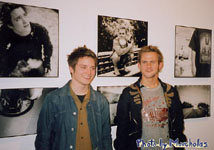 Dominic spoke about how his future role as Merry in the next two films would be so much more expanded, and I told him how much I was looking forward to seeing more of "Merry". He talks of Merry as a separate person: " Yeah, he becomes quite a buff guy, in the future , a very tough soldier all bulked up, lots of battles. and then becomes a Knight, it's very cool" (don't forget the Brit accent when imagining) He was very happy about the changes in the character, as in FOTR the Hobbits are more "cute" and "sweet", the word "Disney- esque" may have been mentioned. He also confirmed that he would be getting taller in future films, and they did have him and Billy outfitted (I don't know what specifically) to make them taller in TTT. Sorry min-spoiler!

He added Hollywood was responding well to him and he was getting sent many scripts, though wading thru the, ahem, less desirable, (not quite his words) scripts was on-going. He would like to play something completely different in future, (he said with that twinkle again) a serial killer would be great. I mentioned this serial killer idea to Elijah later as well, but he didn't think that was quite where he was heading for. Lastly, I asked him if he read the boards and sites on the internet, and very matter of factly he chirpped up "Oh yeah, we all do." Any specific? I asked and he answered, the LOTR.net website and One ring.net ,among about four, (he dashed them off so quickly I didn't catch them all). So be careful what you say....

During this time he also signed my poster and we took some pictures. He was very happy to do both and was very nice to everyone who spoke with him.

Elijah was surrounded next to us and for a very steady time after, graciously signing magazines, books, pictures and posing for pictures. Of course I asked him if he would sign my poster. He always had plenty to say to his fans, looked incredibly comfortable, though always surprised when people praised him and ever thankful. Even without his "Frodo" wig and ears he was completely recognizable. Many have mentioned his beautiful features, and both he and Dominic are handsome men, however Sir Ian's quote about Elijah of "He has skin of liquid marble and an other world look about him" is true. His face is very striking to see in person, and LOTR is probably the first film I have seen him in that really brings those features to life. And his eyes ARE that blue, (apologies to Elijah if this is too embarrassing) Dominic's sparkling eyes are blue, as are Viggo's.

One of the photos featured in this article is Elijah playing with a baby girl a couple had there, her face is a match in skin to Elijah's and she even had his eyes, and the two of them just ate each other up. She was just a bit timid at first but Elijah stuck his face right in with hers and she was delighted with her new found" toy". I couldn't resist snapping some pictures.

Some of my conversation with Elijah: No, he did not go Veags for his birthday, not yet anyway. I had recently seen his film "Black and White" and asked him about it. He gave an undeniably negative reponse to the film and his performance in it. I found his honesty very refreshing, nice to see someone who can view his own work with an open mind. I had read an interview of his where he said he was drawn to this work because of the improvisation the actors had to do (there was no script) and he confirmed, yes that was what interested him, he just wasn't happy with the results. As a side note I did not get to tell him I thought it was very brave experience to go after, no matter what the result, and would guess that something must have been learned from it, even if it were to avoid improv in the future (that's a joke).

I asked him what kind of work he was being offered, if he was moving into more grown up roles, (especially not teenagers). And he replied that yes, the roles were a bit older, just a bit. The photo we purchased that night was the black and white of Elijah at Te Anau, South Island, New Zealand in an unexpected snow storm that shut down the filming, and giving the actors a chance to play. I told him we had bought it, he was very happy and thanked us. Incidently, it is THE photo at the gallery, so as the new owner, I'd appreciate it if you go to see it, to make sure no one is sticking their fingers on it, much obliged. At one point the evenings funniest line was uttered when a man approached us as we were talking to Elijah and whispered "Is that the artist?" Especially wicked when you look over the man's shoulder at the Viggo photo entitled "Self Portrait".

Later when the crowd thinned out Elijah and Dominic got a better chance to look around and the two of them came to their portraits. Dominic was clowning around and put his nose to the wall and wouldn't turn round for the photographers starting to line up and click for the obvious oppportunity. Finally he turned and then they posed. Then they started a mock argument nose to nose, trying very hard not to laugh. At this point I would like to say that having met three of the Hobbits, in the same night, how obvious the chemistry that flowed between all them was, despite having met Sean separately. They were all so well suited to each other, you could never doubt the fellowship they have continually professed, had really happened. If Peter Jackson took into account the personalities, as well as the acting abilities, of whom he cast, then the man must be a genius. Apologies, am I drooling?

Lastly, the man of the hour, probably hoping everyone had gone, made his appearance. Yes, despite reports to the contrary, Viggo Mortensen did attend his own opening. He had a very nice light green suit on with the whimsical addition of a "Burger King" name tag with "Viggo" on it (check the photo) Darn, forgot to ask him if it was real. He was a very, very soft spoken man, and graciously signed peoples articles, shyly smiling. I asked him if he would sign my poster, but feeling suddenly guilty, assured him that we had bought his signed book, and that we had bought a piece from the show that night as well. He looked up and wanted to know which one. Then he very sincerely thanked me. I told him we would have to wait till April and the end of the show before taking it home but it was well worth the wait. I also got a rare laugh out of him when I told him about the man asking us if Elijah was the artist. He didn't stay long, and as I spoke later to a friend of his who said how he wasn't comfortable.

As we went for a last admiring of our new picture, we were standing in front of it, talking, when a women came up and asked if we were Elijah's parents. Ouch, beautiful though the young man is, I'm younger than Viggo thank you very much. I'm guessing it was my blue eyes.