I just wanted to quickly let you know about some photos I took of Ian McKellen at his recent Book Soup signing.

There was a huge amount of people there. Book Soup thought it was the largest crowd they've ever had for a signing before. Did you go to this?

I went on a whim and it turned out to be a fun experience. Ian was very sweet to all the children there who were excited to meet 'Gandalf'. While there was no personalizations, he did personal the book for the two little boys that were in front of me, asking for their names. 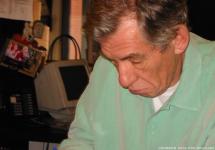 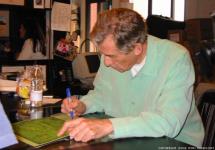 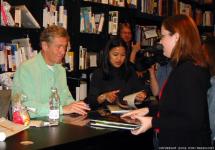 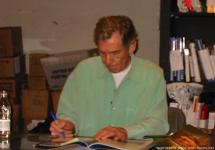 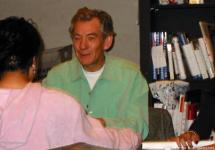 I told him how incredible he was in 'LOTR' and 'Gods and Monsters' and thanked him for doing this signing. He thanked me for what I said and shook my hand.

In photo 5 you can see my friend Valerie getting her books signed (she also attended the LOTR screening and Q+A with Ian the previous night and I think had emailed your site about the event). She asked him if he was getting tired signing so many autographs. He said, no, that his name wasn't so long and he's used to it. Book Soup did a great job and made sure everyone had a chance without being pushy. You could have as many books as you wanted to sign and up to 3 other LOTR items signed. And you were free to take photos. It was really set up well. Of course, if you were there, you would know all this.