I thought you might be interested to know that Elijah Wood was at Harvard University today at the invitiation of the Harvard Lampoon! The Lampoon awarded Elijah their "Best Actor of All Time" award. A few of the past recipients of this award have been John Wayne, Robin Williams, Natalie Wood, and Randy "Macho Man" Savage. 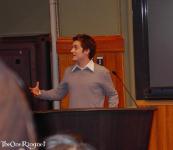 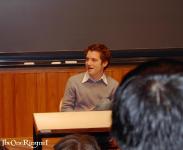 However, the president of the Lampoon assured the crowd that he was convinced that Elijah was absolutely(!) the best actor of all time. The President made a short speech to introduce Elijah, making a few jokes about some of Elijah's less than famous movies. Elijah was a very good sport and either accepted the ribbing or joined in. He was presented with a Burgur King Light up collectible mug of Arwen and a bowling trophy proclaiming him "The Lord of the Wings" (after a very bad chicken wing sketch). He also helped act out a parody of a scene between Gandalf and Frodo with two action figures. 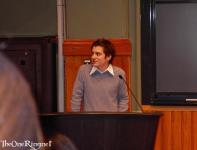 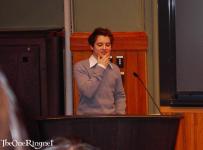 After that Elijah did some question and answer stuff and showed of his tattoo (twice) at the request of the audience. The whole thing lasted about half an hour, and there was very little mingling afterward as he was quickly spirited away to the Lampoon Castle, but the whole thing was really cool!

As for the pictures, I have done my best. I'm not an experienced photographer by any means, and have owned the camera used here for about two weeks.

Unfortunately I didn't get any of the skits on the digital, but I do have them on normal film. Yay for Harvard!