Greetings from Denmark, where we also had a huge Galla premiere of Lord Of the Rings on the 19.th of December. 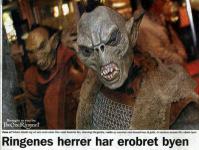 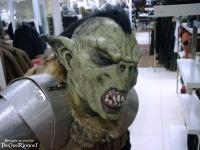 When the film of my dreams finally loomed in the horizon, me and my buddy Nicolas Bjerre decided to build something great for the premiere in Denmarks nr. one premiere theater "The Imperial". I made 7 "Moria Orc" latex mask, and for nearly 2 months we slaved over endless yards of fabric, foamrubber and nearly 20 liters of latex, before our creation was done....

We had build ourselves a Cavetroll ! 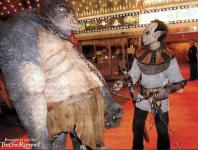 We didn't have were good pictures at the time, so i kinda' looked cartoony and not as scary as intended, but we were proud of it and gave it a large red butterfly, since it had to greet all the guests and be goodlooking for the Queen and Crown Prince that night.

The galla opening was amazing, easily the largest and most extravagant of it's kind in Denmark. We guarded the cinema, disguesed as Moria orcs, dragging our enourmos Cavetroll around and drooling and snearing over the invited guest and hundreds of bystanders.

We met Christopher Lee and his charming danish wife, and said Hi to our half-danish hero, Viggo Mortensen, who seemed to take thing relaxed and leaned back. He actually grabbed one of my disguesed friends, that I had made up as Saruman, put his hand on his butt, and said : " You are staying here, while the press take some photographs of us, my friend!" My friend was to shocked ( flattered?) to move, I guess!

The evening was a blast and the Cavetroll was everyones favorite, especially when it came right up to people and said, in a squeaky voice: " I love you!". The funniest thing that one of the bystanders said to the Cavetroll was" Hey, that's my Mother In Law! - haven't you lost weight???"

The movie is still number one here in Denmark also, and iv'e seen it 4 times allready. Thanks Peter Jackson- I knew you could do it. Can't wait till the DVD and the next Christmas!