Overall our Line party was a big success!! It was a lot of hard work, and we got roughly 30 people to join the Line party. I set the meeting place at Peel metro for 7pm. I got there at 6:15pm to make sure I didn't miss anyone but unfortunately I think I did, or the metro was just a bad place to meet because I lost 7 people from our party. Well we all met at 7 and we went to go into line(where luckily my friend Jack had been standing since 5pm and was in the middle of the line!!) We had a fun hour in like and at 8pm they let us in the theatre for a half our sit till the movie started. As I sat there me and friends conversed about the books and how anxious we were. I was really nervous! You know when you're taking a test or getting a needle at the doctor or asking that special someone on a date? I was WAY more nervous I had butterflies like crazy! well 8:30pm and the lights dimmed and we saw previews one of Playstation 2 another of Blade 2! and a few others but then.... The movie started...and then it was heaven!!! 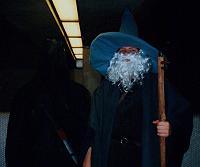 Then movie lived up to my expectations I honestly thought it was over hyped and I thought I wouldn't enjoy it but I did!! I LOVED IT!! Although for minor adjustments I had to get used to like Arwen's bigger role and no Tom Bombadil I enjoyed the movie very much! The movie was 100% to the book, it was pure Tolkien! I mean it was 100% like the book I guess 95% you can't expect it to be exactly like it because its an interpretation of the book and I t has to be understand by non-tolkien public. But it was a sight to see just dazzling!! Especially the Special effects!!!!!! the cave troll the Balrog the opening battle and the battle at the end all AMAZING!! 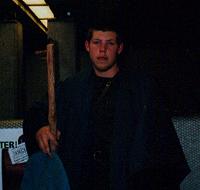 In the end my fellow LOTR lovers and I found the movie lived up to its expectations and we will be going to see it agin soon, which will be my fourth time. As for the non-Lotr readers they seemed to doubt the movie and were skeptical about it but they loved the movie even more than I did which pleased me. They were so hyper about knowing what happened next they went out and bought the book the next day!!!