There and Back Again

The flight to Sydney from Brisbane was scheduled for a 5:00am take-off on Friday the 21st of December. I had to get up at 3:00am to get ready and to leave enough time for the trip to the airport.

Once we got to Sydney, we caught a taxi to the place where we were staying for the weekend. We couldn't check in till 2:00pm and it was only 9:00am, so we wanted to drop off our bags while we walked around Sydney waiting till 2:00pm. We had to store our bags in some lockers two floors down from the reception so we got in the lift to get to the bottom floor. While in the lift I made some sudden and jerky movements, which caused the lift to come to a sudden halt! Needless to say, both my friend and myself had a heart attack. In the end we had to wait an hour before the maintenance people were able to get to the hotel and let us out.

The Premiere
We wandered through Sydney until it came time for the premiere of The Fellowship of the Ring, in Australia. Before we went to the cinema where the premiere was taking place, we met with some friends at a pub, who were also going to attend the night with us.

After finishing the remainder of their beer and wine we walked to the premiere. The street was packed with people who lined the red carpet waiting for a glimpse of the actors from the movie. I showed my pass to a security guard and walked down the red carpet towards where the movie was going to be shown. As I did this I saw a few Australian celebrities.

Eventually those I was with and myself reached the entrance to one of the theaters where we could finally see the movie I had been anticipating since rumors of the movie began. At 7:00pm the doors opened, we entered, found a seat and waited… and waited.

The actors who were attending the premiere got held up in traffic and were very late to the premiere. Screening was to commence at 7:30pm but didn't start till 8:00pm. But the wait was worth it. 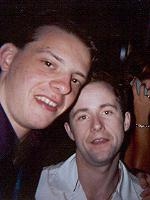 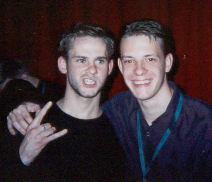 Before we knew it the actors who were attending the premiere were running down the isle to be introduced as their characters in the movie. Elijah Wood, Billy Boyd, Dominic Monaghan, Orlando Bloom and Hugo Weaving were standing at the front of the theater, at which point I decided this was a perfect photo opportunity. 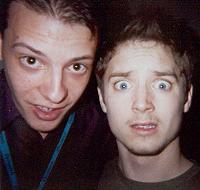 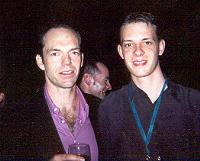 They then walked back up the isle and left us to experience the movie for the first time. While walking up the isle I heard Orlando Bloom whisper, "I hope you like it!", and I certainly did. I wont go into what parts of the movie I enjoyed the most to avoid spoilers for those who haven't seen it yet.

The movie ended, and everyone sighed with relief because the end of the movie was so emotionally charged and you felt the end of it mentally wore you down. This was a good thing in my opinion.

Next on the agenda was the after party for the premiere, which took place at Sydney Town Hall. For me this was the highlight of the night. The Town Hall was completely packed with people who were eating, drinking, talking or doing it all at once. They were playing music from the FotR soundtrack and had a young woman dancing on the stage, who was dressed similar to how Galadriel looked in the movie. The actors were seated in an area separated by a red rope and security were making sure no one passed over it. It was at this time that I thought I would never have a chance to meet the actors.

But Hugo Weaving came right up to the rope and was signing peoples FotR movie guides and having his photo taken with several people. Just before I got Hugo to sign my ticket to the party I remember him saying to someone else that it felt like he was in a zoo because of the way the rope was there to separate the actors from the rest of the crowd. Not long after I had got my ticket signed and had my photo taken he stepped over the rope to meet with some of his friends who were in the crowd.

For most of the night I was eating, drinking and talking to the people who I had attended the premiere with. But as the night turned to the morning the hall began to empty a bit. This was when security was much more relaxed and people were able to meet with the actors in the area, which was roped off. My friends and myself were lucky enough to go into the roped off area and meet with the rest of the actors who were Dominic Monaghan, Billy Boyd, Elijah Wood and Orlando Bloom.

Finally I had photos and the autographs of all the actors who had attended the premiere, and by this time the hall had become progressively empty and many of the remaining people had filtered to the smaller outside area. This was one of the best parts of the night because you got a chance to meet the actors a little better. I found Hugo and asked for another photo because I was a little distracted in the first one, and wasn't facing the camera. After the photo I started talking to Hugo about his new movie projects, the Matrix sequels, both of which he stars in. We mostly talked about how the deaths of Aaliyah and Gloria Foster had effected the production of the movies. Hugo told me that the death of Gloria Foster was a major set back to the production of the movies, because he character (the Oracle) had major roles in both of the sequels. We also talked about how exactly it is that Hugo's character, Agent Smith, is brought back to life in the next Matrix installment.

For the rest of the night I talked with my friends and had more to drink, and decided to let the actors have a break from the smothering of fans like me! By 2:30 most people had become tired and we decided to leave. At that time, as far as I could see, only Hugo Weaving and Billy Boyd remained.

After the premiere
For the rest of the weekend I enjoyed the sights of Sydney. I went to Manly, Sydney Opera House, Circular Quay, The Rocks and Taronga Zoo. I also watched Monsters Inc. on Saturday night, which was a great movie. I enjoyed Taronga Zoo the most, but got very badly sunburnt. On Sunday my friend and I were finally on our way back home to Brisbane.

Within a week I will be sending pictures of the weekend, including the premiere and my snapshots with the actors.