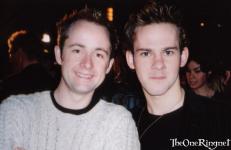 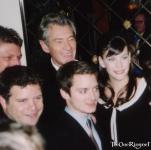 New York Premier of Lord of the Rings was a marvelous experience and a huge success! A very well organized team of New Liner's worked diligently to help people make it through ticket and security checkpoint, pass representatives of every major media outlet and into the beautifully appointed Rhiga Royal Hotel. The reception room filled quickly as the pre-show cocktail party to benefit the World Trade Center Relief Fund began. Fine wine and appetizers were served in abundance. Having been to enough charity events to recognize the same dull small talk and see that it was the usual group that was forming I decided to return to the red carpet to watch the stars arrive and handle the press. 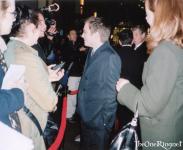 First down the line was Ian McKellan. This man is the definition of the word gentleman. His courtly bearing defines style; his speech was soft yet powerful in its message. One after the other he responded to questions, never once breaking a sweat, always with a gentle smile.

Next was John Rhys-Davies in an elegant tuxedo. Nothing prepared me for JRD. It was as if lightheartedness entered the arena to chase away the hohum. How can you look at this man and not want to smile? He has a knack for bringing out the warmth in people, yes even reporters! He has a very reassuring presence and was very amiable to all, even the most annoying reporter.

Out of nowhere Orlando Bloom seemed to have emerged and while I liked him in his Mohawk haircut from last summer, it was pleasing to see he had let his hair grow back. A very kind and considerate man, he is fully able to melt women's hearts with a mere glance. Standing near him you get the feeling he is assured of himself and the direction he wishes his life to take.

Once Elijah Wood stepped onto the carpet all the cameras started flashing. This young man is a vibrant bundle of energy. It was amazing to watch him bounce from one reporter and TV crew to another. His smile was wide as he allowed the New Line PR person to drag him from spot to spot along the line. Warm hearted, caring, gentle and very kind, he impressed me. For a young man of some twenty years he acted far wiser then his years would dictate reasonable.

Suddenly I saw Sean Austin hugging Elijah as they gabbed with one of the TV crew. Where he came from I do not know, but seeing him you saw optimism. You look into Sean Austin's eyes and see depth of spirit. He is the kind of person you would wish to have the honor to call friend for friendship, in its truest sense is what he evokes. 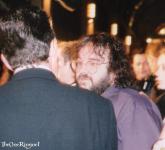 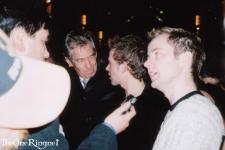 Billy Boyd and Dominick Monaghan seemed to arrive together and remain inseparable. These two have a bond of friendship that is rare and delightful to witness. Watching them, you can envision them in ten, or twenty years down the road still being friends. Dominick Monaghan has bright eyes that sparkle with playfulness. His countenance expresses joy and just plain happiness. Billy Boyd arrived wearing a kilt and ladies this man has wonderful legs! But it was Billy's effervescent smile that captured my attention as well as his brilliant wit. Where Dominick defines brightness, Billy defines charming.

Sean Bean strolled down the lane of reporters and spoke in a very soft voice. A quiet sort, I got the impression that if he knew you better, you would be privileged to see the deeper, more compassionate side. The key word here is refinement.

Liv Tyler is the epitome of grace. She arrived fresh from the Letterman show and walked down the now familiar path talking in a rather breathless kind of voice. She was by far the most glamorous of all those present. 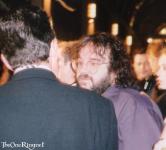 Peter Jackson was the last to arrive and the most impressive. He does look like a hobbit in real life, or at least he reminds you of one. I had the briefest of moments to speak to him and found him very warm-hearted, kind and gentle. He has a soft voice yet his choice of words are poignant, the mark of a true writer.

Everyone enjoyed the cocktail party and just as soon as it began, we were being summoned to go to the theater a few yards down the block. In front of the theater another pack of paparazzi where eagerly awaiting the arrival of the stars. Inside everyone received free popcorn and soda to enjoy during the movie. A few speeches were made during which it was noted that this event raised $315,000 for the World Trade Center Relief Fund. The Governor thanked the producers for arranging the benefit for the fund, and thanked all the members of the NYC fire and Police departments for their outstanding work.

Mr. Peter Jackson took pride in introducing the cast of his film to the audience and with each introduction a large round of applause was let loose. He mentioned briefly all those who were involved in the film but couldn't be present were duly noted in the 11 minutes of credits at the end of the film which brought a chuckle. As the lights darkened, the cast spread throughout the theater to find their seats.

The film began and with the introduction of each character on screen, the audience applauded once again, something I never saw happen before. The film is absolutely amazing. I will not post any analysis or spoilers here but let me tell you this is one film you must see and plan on seeing not just once or twice but at least 3 or more times.

As a writer who has done a screenplay or two, when I sit down in a movie theater to watch a film, inevitably I get caught up in spotting errors, or spend the movie immerse in analysis of how the characters are being played, story structure etc.

During the viewing of Lord of the Rings; The Fellowship of the Rings something astounding occurred. I forgot work and became entrenched in the world of Peter Jackson. Yes, this hardened cynic stopped to be amazed, dazzled and awed by the tremendous achievement of Mr. Jackson. As a die hard fan and purist at heart, I support this film for its breathtaking achievement. The changes from the book kept in line with the characters nature and do not detract from the story.

When I walked out of the theater I was sad that I would have to wait 5 more days before I would be able to see it again. Run! Don't walk, to your nearest theater and enjoy the show!