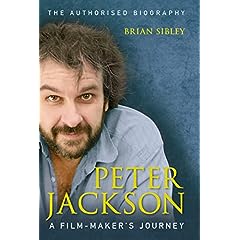 Tehanu writes: Most Peter Jackson fans will never get the chance to have dinner the man. This book might be the next best thing, because it is stuffed full of anecdotes about the very things a fan would probably want to ask him if they had the opportunity. PJ is as we all know a great storyteller, and this book gives him a chance to tell the story of how he came to be a great film-maker.

Author Brian Sibley has also collected stories from people who have known or worked with PJ since he was a child, and woven them together into an exhaustively well-researched account of PJ’s life to date. The book charts his progress from an “enchanted” childhood of remarkable freedom, to the David and Goliath battles he faced when he started work on the Rings. On the way we read descriptions of him from those who met him on the way up, such as film maker Costa Botes. Botes saw PJ, then in his early twenties, as “a lunatic fan-boy”, a “lovely fool, a brilliant idiot, a kind of uniquely talented savant who was capable of coming up with amazing ideas and images. But I have to be honest and say that I had no inkling at that point that he would go on to create cinema of real maturity and depth.”

The book examines the difficulties – political, logistical and financial – that PJ faced in getting the Rings made, but it is also shows very clearly how PJ had spent his whole life in an apprenticeship for it. Making films with special effects, and even learning about the world of film at all, was far harder for a child growing up in New Zealand in the 60s than we can easily imagine now, and the book documents how single-minded PJ had to be. Everything he did and wanted to do, from the day he picked up his first film camera at the age of eight, was strewn with obstacles.

If I were a parent, this book would leave me wondering how I could raise a child as fearlessly committed to exploring their interests and as confident to experiment and learn.

The book is generously sprinkled with photos, captioned by PJ himself with his characteristic humour in many cases. Along the way we get a glimpse of the sheer range of talents the man has – talents that in some cases would be the distinguishing feature of a person, PJ seemed to master quickly and then discard if he had no use for them. One of the photos in the book shows a set of caricatures PJ drew of himself and his colleagues when he worked as a photo-engraver at the Evening Post. On the strength of those, he could easily have been a professional cartoonist. The same could be said of his early creature masks and the scale model spacecraft he built as a teenager – they are incredibly competent work. It is one of the delights of Sibley’s book that it has so many pictures of PJ’s early experiments, and one gets a sense of the enormous variety of PJ’s enthusiasms.

There is a striking photo in the book of PJ as a toddler being walked through some New Zealand forest. PJ writes in the caption how his mother was “great at creating off-the-cuff stories about the trolls in the woods or goblins who lived high in the branches.” The picture shows him “clearly captivated by a wild story she’s concocting – and 35 years later on the set of The Return of the King, with her son having turned all those wild stories into something of a career. With a different mother, it would almost certainly never have happened”. The young boy in the photo has almost exactly the same facial expression as his own children would, nearly forty years later in The Fellowship of the Ring, as they listen to Ian Holm tell them Bilbo’s adventures with the trolls.