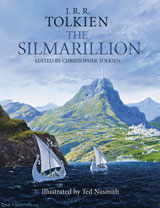 Our very own MrCere writes: There are things you want for Christmas, even if you don't know it. For example, two wonderful new additions to the Tolkien library.

J.R.R. Tolkien was dreaming about puplication of his created mythology long before the publication of even his widely known "The Hobbit." That children's tale and its 'sequel' of sorts, "The Lord of the Rings" reached publication and immense popularity while his initial work was read only among family and friends. Publication of 'Rings' was even delayed while the author pursued a publisher willing to package his oldest tales of Middle-earth along with his narrative of the War of the Ring that began as a sequel to 'The Hobbit' ended up being an integral part of his larger myth and the vehicle to introduce it most easily to readers. As it turned out, no company was willing to risk publication of both books.

Eventually Tolkien's dream of having his collection of the cosmology of Middle-earth published was realized when his son and literary heir Christopher edited and published "The Silmarillion," four years after his father's death. It immediately became a best-seller.

A testament to its lasting popularity is the new volume illustrated by renowned Tolkien artist Ted Nasmith who spoke with TheOneRing.net about his work on the book and on Tolkien's other works. Nasmith is on a US promotional tour to support the new edition. While he has met fans and received feedback in various ways including E-mail, the tour is new for him and confessed to some apprehension about the new experience.

"I am showing slides of the work and talking about it. I am hoping the promotional work has been done properly and that there are a lot of people (at the events)," Nasmith said.

He has watched the ranks of Tolkien fans swell as the Peter Jackson-helmed movies have exploded on world culture, but his own love for Middle-earth stretches back long before the recent films. While in high school and already immersed in formal art training, his sister introduced him to Tolkien which became an immediate new focus for his artistic abilities. It opened for him a love of "lost and misty times, myth and legend." He joined the Tolkien Society and dreamed of contributing to the Tolkien calendars of the late '70s and '80s which seemed a distant goal. Making his living as an architectural renderer, he made his breakthrough with a calendar piece in 1987 and then with four works included in a later calendar. From that time on Nasmith has established himself as one of the preeminent Tolkien artists which led to book covers, full Lord of the Rings calendars in and now this expansion on his 1998 illustrated version of "The Simlarillion".

"I think this will probably be the last illustrated Silmarillion for a long, long time. It will be the illustrated edition for years and years. It is pretty important to me personally and its a big title in Tolkien so I gave it 120 percent. I was delighted to be able to go back to the 1998 version and get more of what I wanted in," he said.

The book, in comparison to 'Rings' is less concrete in its physical descriptions, is more in the style of the Old Testament or Bullfinch's Mythology, leaving the artist with a greater chance for interpretation than from a traditional narrative, but it wasn't just the artist and the publisher that needed to be pleased.

"Christopher Tolkien, he was very much involved in the decision making - it was a three-way dialog. Once we settled on a list it was between Christopher and I to decide."

The editor and son of J.R.R. is known for requiring incredible fidelity to his father's work. "He is probably the one person in the world who knows his father's mind and sensibilities. To communicate with him is the closest thing to communicate with J.R.R. himself. He is difficult to please and exacting and that pushes me to put my best foot forward." The two worked out the details of the book over fax machine, phone and a period of negotiations and discussions.

Nasmith also wanted to satisfy his own sensibilities and he feels the end result is pleasing and gratifying to all parties. "I do seem to get inside the book and I get some good feedback from fans and I appreciate that, weather I am working for them or not."

Nasmith's next stop will be Wednesday, October 27 at Borders Books in Crossroads Mall, downtown Salt Lake City. The event starts at 7 p.m.. The book is a beautiful version in a solid, handsome hardback that simply deserves to be owned. Many find reading the the volume for the first time a tough go and here Nasmith's work really helps. An occasional visual representation, much of it scenic, helps readers visualize select events and characters more easily. The paintings also seem to soften the taxing text with a little break. The paintings don't cover every character or situation, not by a long shot, but the coverage is appropriate and welcome.

The book steers away from the oldest and most powerful beings in Middle-earth's history, wisely sticking with subjects easier to identify with. The artist would like to tackle some of those figures someday but this version of this book was not the place. 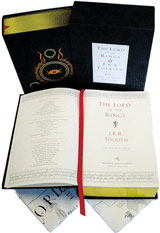 Click here to order The Lord of the Rings: 50th Anniversary Edition

"The Silmarillion" is not the only recent offering from North American Tolkien publisher Houghton-Mifflin. In honor of the 50th anniversary of the publication of "The Lord of the Rings" HM has released, along with Harper-Collins in the UK, the finest editions of 'Rings' ever published.

Online images suggest that the HM edition is blue while it is actually a gray leather that in all other ways is just like the picture that is in circulation. Clay Harper of HM explained on the TORn message boards that the picture being shown was an early production prototype that has been mistakenly used by places such as Amazon.com. This book was produced with Christopher Tolkien's input and J.R.R. Tolkien's art and design. It features, as the author originally wished, beautiful reporductions of the book of Mazarbul. A read of Tolkien's letters reveal that this is a feature the author wanted, badly, in the original version of the book.

Paper prices in England at the time of 'Ring's original publication in post WWII era, and the daunting task of printing a book bigger and quite unlike anything else done at the time, made inclusion of many of the author's suggestions impractical due to financial restraints. Publishing the book in three parts was just one concession that had to be made to potential profitability, hopes of which were dim at the time.

This book, fifty years after its first publication, has gone impossibly far beyond proving financially solid. The story of Sam and Frodo has earned wealth far, far beyond the hoard of gold Bilbo tricked away from the dragon Smaug in 'The Hobbit.' It seems fitting that HM has made available for the golden anniversary of that book an edition that realizes or surpases the finest version the author might have imagined. The pages edges are gilded gold and on high-quality paper. Included is an attached ribbon marker for those who will actually read this version which is far more likely to end up as a display in a curio cabinent than in a backback for a commuter to read. The ribbon, the paper, the stamped foil cover, the interior reproductions, the end-paper, and the fold-out maps combine to lead an owner to admire the craftsmanship and art in the book just as much as the story it contains. It has the feel of a hand-finished volume in an age of mass production and consumption.

It isn't inexpensive however. With a suggested retail price of $100, this isn't a impulse buy. However, big discounts can be found right now, while the book is still new. Amazon.com offers it for more than 30 percent off cover price while many Borders and other book stores have similar discounts.

Both books will be the cornerstone of many a collection and two highly coveted holiday presents.