Applause For Applause - Xoanon @ 23:03 PST
I was wondering if you guys had seen the new Lord of the Rings movie figures by Applause. I ask because I had heard nothing about them whatsoever until I stumbled across them at my local EB yesterday. There are four of them - Gandalf, Aragorn, Saruman, and Lurtz - and all of them are fantastic. All four were at the EB, so I picked up the Gandalf figure.

I'm really happy with it:

It's very detailed, it looks exactly like Sir Ian McKellen in his Gandalf gear, much moreso than the Toybiz figures. 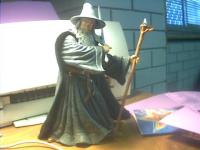 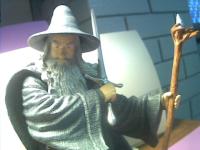 It's bigger than your average action figure, significantly so. As a comparison, the top of the Toybiz Gandalf's head comes up to about the sword-arm of this Gandalf.

It's non-poseable, with a very stable base so there's no chance of it falling over. Thankfully these are obviously aimed at adults who put these things on their shelves, rather than kids who bash them against each other. And while it may not be poseable, it is in an absolutely kick-ass pose to begin with.

It didn't cost me an arm and a leg. It was $60 Australian, which I thought was more than reasonable for the best Gandalf figure I've seen so far.

I've included some pictures. I couldn't find any information on them on the applause site ( www.applause.com ). In fact, the only information I could find online about them at all was one ebay entry. The first two pictures are attempts at detail shots of the figure (excuse the bad quality sorry, I took them on my webcam), the third I took from the ebay entry, and the last two are scans I made of the box. 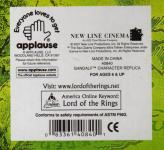 Basically, I really recommend them if you can find them. This Gandalf is better than the Toybiz one in every single way, and it's a lot cheaper (and arguably better looking) than the sideshow WETA one. I plan on getting the other 3 in the series (even Lurtz, since he looks so damn good!) once I have some more cash spare.