Xoanon here from Southern California. Kayjay and I are still in the hotel room recovering from last night's amazing Oscar Party at the Hollywood Athletics Club. Most of TORN is here with us in the hotel including Jincy, Corvar, Calisuri, Gamgee, Gandalf, Thorongil, Arathorn with Lady T. All os us are trying to wake up after staying out all night last night.

I'll give you a quick run down on the party with a promise of a more in-depth report and a whole slew of photos when I get back to TORN HQ.

This year we took over the Hollywood Athletics Club (HAC) as opposed to last year when we had only a select few rooms to play with. The main room was a gigantic auditorium complete with an amazing speaker system and a ceiling mounted screen where we presented the Oscars. This was one of 3 main viewing rooms, along with other smaller TVs all around the club. We had the main hall and registration area set up as Fangorn Forest, complete with trees and errie lights to give it that dark mood.

The entire club was Middle-Earth themed, with rooms called Edoras, the Golden Hall, Rohan, Henneth Annun and The Dead Marshes.

The Dead Marshes was of particular interest. Once a swimming pool, this room now housed a dance floor and bar. We transformed it into a viewing room with dry ice all around to give it a haunted look. Truly wonderful!

The lineup for the party went out the door, around the block and down the street! TORN staffers and volunteers were ready when the doors opened at 4pm. ABC aired it's usual pre-oscar blitz with red carpet coverage. Food was laid out for our many guests, with free beer, wine and soda all night. Quickbeam was our emcee again this year and after a fairly shaky introduction (all in good fun) he stepped onto the main stage in the Golden Hall to welcome everyone to the party!

The Oscars began at 5:30pm, while many of our 1100 guests were still making their way into the club. The night started off with a bang when TTT won for best visual effects!

TTT also picked up best sound editing later on in the night. It lost to Chicago for best film however, but we were content to know that next year will be ours!

All TORN staffers were on a rotating schedule. We hopped around from the silent auction room, to the TORN shop, to VIP rooms and more. It was at around 9:30 when KayJay and I were manning the TORN Shop that Tookish popped in to tell us that John Rhys-Davies (Gimli) had arrived. We were quite surprised by this since he had never confirmed that he would be coming. We didn't even know he was in the US. We patiently did our full hour at the TORN Store then shot upstairs to greet him. He told us that he was working on a small piece for the BBC, and found himself in LA at the time, so why not!

Craig Parker (Haldir) was next to arrive with a very excited Bruce Hopkins (Gamling). They were greeted by press asking questions and adoring fans behind baracades begging for photos. Bruce embraced me like a long lost friend, and was an absolue mad-house of energy. He was fired up from the moment he arrived, and indeed stuck around well after we left!

Billy Boyd (Pippin) and Dominic Monaghan (Merry) were the next to arrive. The roof nearly came off the ceiling when they turned the corner and were greeted by the adoring fans. We followed Billy and Dom up into the VIP area where they unfortunately made their way into the smallest room at the club! They were surrounded by fans and well wishers who wanted photos and a handshake.

About 30 minutes later we heard that Sean Astin (Sam) and his wife had arrived. Little did we know it but as we walked to the VIP entrance we passed right by them. Sean was amazingly gracious and dressed to the hilt in a tux as he had just returned from the Academy Awards. A throng of adoring fans converged around him. When one of them mentioned how they loved his short movie 'The Long and Short of it', he gave them the good news; His short will be seen on the theatrical version of TTT to be relased this August!

Sean immediately wanted to know where Billy and Dom were and we led him to the room they were hunkered down in (still the smallest room in the place). They then all decided to head down to the main room in the Golden Hall and thank all the fans at the party.

The next few minutes was a buzz of bodies, corridors and flashing lights as we led Billy, Dom, Craig, Bruce and Sean (John Rhys-Davies had already left) down to the main hall through secret back entrances. Kayjay and I were then lost amid the swimming masses of body-guards and HAC staff. The next thing I knew, Andy Serkis (Gollum) had arrived and was on stage with Barrie Osbourne, Mark Ordesky, Alan Lee, Jim Reigel, Randy Cook, Grant Major and a whole slew of other WETA talent that was present at the Oscars. How and when they arrived was a mistery to me.

Sean Astin played Emcee for the moment and introduced everyone on stage. The roof nearly DID come off as the crowds cheered for the Oscar winners. They all came to the mic to thank the fans and TheOneRing.net for all the dedication and love. Barrie Osbourne had arranged for Peter Jackson to call in from New Zealand to thank everyone 'in person'. Peter and Fran, along with a whole slew of other NZ talent had opted to stay in New Zealand this year, much to our dissapointment. Peter came on the PA system over a phone line from New Zealand and the crowd erupted in applause. The only problem is that PJ couldn't hear us very well, and we couldn't hear him! It turned into a comedy routine with Sean Astin on the mic saying 'Peter?' and PJ on the loudspeakers saying 'Yes?'. With a big 'thank you' (the only thing we could hear) Peter left the loudspeakers and the LOTR gang left the stage.

We escorted a few of the talent back up to the VIP room while some gathered their limos and headed off into the night. Mark Ordesky and his wife were kind enough to stop by and say 'hi' before leaving for the night.

Kayjay and I headed back to the VIP area and I finally got my chance to shake Barrie Osbourne's hand. We had been playing phone tag in the morning, and I almost missed him at the party. We spoke about ROTK and what they have in store for this coming spring and summer re-shoots. Chris and Dan Hennah were also in attendance. I had met them in Toronto a few months back at the TTT Exhibit. They were as kind and genuine as ever, giving me a few details on the sets they are building and the number of folks currently employed at WETA (scheduled to increase soon).

I was led to our interview room where Craig Parker was signing Oscar posters for us (almost mis-spelling 'Haldir' in the process). We spoke for a while about New Zealand, Canada and accents. I mentioned to him the droves of emails I receive daily from a group of Haldir obsessed women who are petitioning for more Haldir in the TTT Extended DVD. He got a kick out of that, but thought that we'd seen the end of Haldir, Extended Edition or not.

By this time it was coming on to 2am and Kayjay and I (along with the rest of the staff) had been at the HAC on our feet for almost 12 hours. We were beginning to look like zombies as we gathered our things and made our good-byes. Bruce Hopkins was haming it up with a Hobbit standee when we arrived downstairs to leave. He wished me well and asked us not to leave, but at this point I was starting to loose the feeling in my toes. So we departed.

We will have other, more extensive reports about the party last night, on this and other websites. I know I've got a ton more to write about. And a whole camera full of pictures to post. For now I'll leave you with these 12. Enjoy! 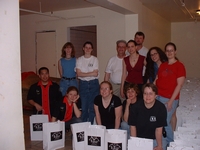 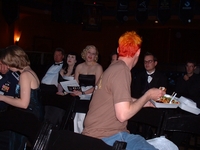 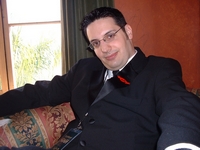 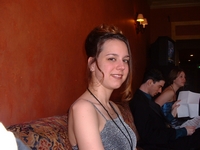 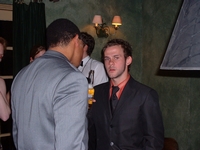 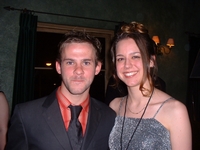 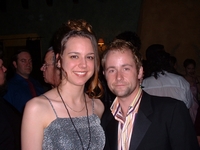 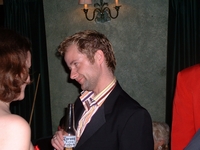 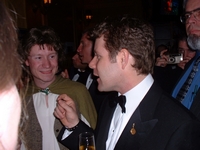 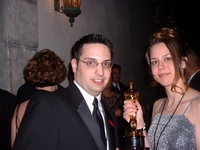 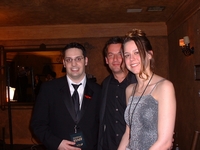 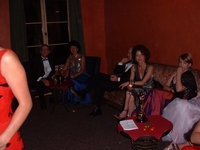