'John Howe--There and Back Again' Screening in Wellington

Fraser writes: The New Zealand screenings of "John Howe--There and Back Again" are the Asia Pacific Premiere for this Swedish/Swiss documentary which features in the 2nd DOCNZ International Documentary Film Festival that starts in Wellington this week. The two screenings at Wellington's Paramount Theatre are at 12.30pm Tuesday 26 Sept and at 8.40pm Thursday 28 Sept. When I bought a ticket to each yesterday (Saturday, Wellington time), I was told very few had sold! [More]

Item 1 is the Weta Statue of Gandalf the White on Shadowfax. This is personally signed by Peter Jackson, Richard Taylor and the artist Brigitte Wuest.

Item 2 is The 1991 Alan Lee illustrated edition of Tolkien's 'The Lord of The Rings'. This is personally autographed by Peter Jackson & Alan Lee. Alan has also sketched an original hobbit inside the front cover. Both come with certificates of authenticity from Peter Jackson's office.

Weta Statue of Gandalf the White on Shadowfax [eBay Listing]

The "Dork" is finally out of the box -- the two-disc collector's box, that is. "The Dork of the Rings," Edwardsburg director Tim Richardson's long-awaited spoof of "The Lord of the Rings" trilogy will be shown Saturday and Sunday at Wiekamp Hall on the Indiana University South Bend campus, but fans of the parody also may want to check out the DVD set filled with behind-the-scenes extras, a making-of documentary, music videos and a historical featurette, to boot. [More]

Just as George Lucas and Steven Spielberg morphed into moguls in the late 1970s, New Zealand native Peter Jackson is following the same career path. He's acting as a guiding light on multiple movies he won't actually direct, in hopes of expanding his Wellington-based movie studio into a Down Under powerhouse. Entertainment Weekly has already reported on the news that Jackson might helm a new version of The Hobbit; here's an extended Q&A that fills out the details on everything he's currently up to. [More]

Lorien "Ramen" Carney, Community Relations Specialist for The Lord of the Rings Online writes: This week, we released new screenshots on Tuesday, including Rivendell, the Trollshaws, and a glimpse of a rainbow in LOTRO. Thursday brought a new point of interest, the famous Prancing Pony Inn of Bree. [More]

Andrew from adcbooks.co.uk sends this along: The next JRR Tolkien inspired Art Exhibition is being held for 4 days from Saturday 23rd September 2006 at The Redesdale Hall, High Street, Moreton in Marsh, Gloucestershire. The Exhibition will contain the largest ever display of the artwork (including new original pieces and new Limited Edition Prints) of the world renowned Tolkien Illustrator, Ted Nasmith who is in the UK for this exhibition and will be attending throughout. Ted Nasmith’s art can also be seen online at www.adcbooks.co.uk. [More]

September 22nd, as we all know, marks the birthday of Bilbo and Frodo Baggins. Be sure to raise a glass of ale in honor of the Halflings!

Daniel Reeve, LOTR calligrapher and cartographer, writes: I have just released the first original Daniel Reeve font - Bilbo's handwriting! It's a TrueType font, available for purchase from my website, danielreeve.co.nz. This is the shire font as only Bilbo writes it, with all his quirks and flourishes - coming soon is Frodo's version. In the future there will also be uncial fonts resembling those used for Rohan and Gondor, a Wizard font, as well as many others...Cheers!

Back to Bolton basics for McKellen

Hollywood actor Sir Ian McKellen will return to his roots this weekend and perform a one-man show to an audience of just 160 people. The Lord of the Rings and X-Men star has agreed to appear at Bolton Little Theatre as part of its 75th anniversary. Sir Ian went to school in the town and was a member of the theatre as a teenager. He will perform A Knight Out In Gas Street for the second time. He premiered the show in Los Angeles last year. [More] 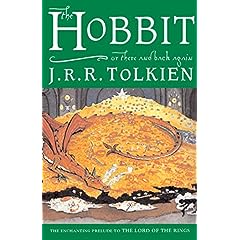 Since 1937, few books have provided more pleasure than J.R.R. Tolkien's The Hobbit. Originally published in England with a first printing of 1,500 copies, The Hobbit today celebrates its 69th anniversary! [More]

NinielDW sent this in: One of David's favourite charities, for which he acts as a spokesperson and fundraiser, is The Wayside Chapel in Kings Cross, Sydney. The chapel provides services, resources, and support to the homeless, abused, troubled, addicted, and other less fortunate members of the community. According to its web site the chapel serves 2,000 people weekly.

If any fans of David's contributions to the arts feel like making a contribution of their own to celebrate his birthday, the Wayside Chapel accepts donations via its web site, thewaysidechapel.com. You can also learn more about the chapel there, and watch a series of short advertisements narrated by David.

Pippin Skywalker writes: I am herein endeavoring to give a faithful account of the spectacles and debacles that made up the wonderful Oxonmoot 2006. This year the event was held at Somerville college, a serenely beautiful 19th century college with beautiful gardens and shire like flowers growing everywhere. It was a very mild september weekend and wonderful for the events which were held in a tent set up in the main college quad. This tent known affectionately as the Marquis, served as one of the main locations of the lectures and festivities. [More]

Lured By the 'Rings'

Fed-up DVD fans decry it as ''double dipping,'' ''triple dipping,'' and right on down the line to quintuple, sextuple and septuple dipping. What are they on about? The increasingly common habit movie companies have of releasing a bare-bones DVD of a film a few months after its theatrical debut, then revisiting it ad nauseam with special editions, extended editions, limited editions, alternate-version editions, and sometimes just plain re-released editions...But right now, the multiple-dip debate is raging around Peter Jackson's Oscar-festooned Lord of the Rings trilogy, as New Line Home Entertainment reissues The Fellowship of the Ring, The Two Towers, and The Return of the King in cool, transparent-window slip-covered cases (or you can get all three in one package) with nearly 6 hours of predominantly new behind-the-scenes footage. [More]

Lady of Light writes: I watched the Memorial Service for Steve Irwin on animal planet and David Wehman (Faramir) read a poem called "The crocodiles are crying" Not sure who got to see it. It brought tears to my eyes. He did a great job. Nice tribute to his fellow Aussie.

From the folks at dorkoftherings.com: See DORK OF THE RINGS photos and our video report from Dragon*Con 2006. Director genius Jack Peterson interviews Kiran Shah (LOTR, NARNIA), Doc Hammer (VENTURE BROS.), David Prowse (Darth Vader) and George Lucas lookalike George Starkey. Includes footage of The dorks' panel with Kiran Shah and other cool stuff. Check it out on our website. [More]

The man behind Gollum heads for Swansea

Andy Serkis, one of the leading actors in modern film animation, and a star of the successful Lord of the Rings trilogy, is due in Swansea later this year for a major film animation conference. The city's annual Swansea Animation Days event returns in November, attracting companies and speakers from the animation and computer graphic imagery industry into the city. Serkis, due to be a speaker at the Swansea Institute conference, provided the movements and the voice for the computer- generated character Gollum in The Lord of the Rings films (2001-03). [More]

Vote for TheOneRing.net - We Need The Votes!

The First Annual Movies.com Reader's Poll has nominated TheOneRing.net as one of the best 'Unofficial Movie Sites' of the year. Head on over to the movies.com poll site and be sure to vote for us to win! The results will be posted online soon!

Unfinished Tolkien work to be published in '07

NEW YORK (AP) -- An unfinished tale by J.R.R. Tolkien has been edited by his son into a completed work and will be released next spring, the U.S. and British publishers announced Monday. Christopher Tolkien has spent the past 30 years working on "The Children of Hurin," an epic tale his father began in 1918 and later abandoned. Excerpts of "The Children of Hurin," which includes the elves and dwarves of Tolkien's "The Lord of the Rings" and other works, have been published before. [More]

Ohio University students and faculty were treated to a crash course in Hollywood special effects far beyond any DVD special feature Thursday night by Chris White of Weta Digital, the visual-effects company that worked with director Peter Jackson on the "Lord of the Rings" trilogy and, most recently, "King Kong."

White outlined the various programs and strategies he and his team employed not only to create the giant beast Kong and his habitat, Skull Island, but to complete the unprecedented re-creation of New York City circa 1933.

Perhaps the huge scale of the project was the inspiration for one of the pieces of software White's team designed, "Massive." Most of the people going about their lives in the background of "King Kong," White explained, are actually what he termed "Massive" agents -- artificial-intelligence units programmed to have "brains" so that they can actually see, hear and react to things in a realistic manner. [More]

Arwen writes: We are pleased to announce that TORn will hold their annual Los Angeles Baggins Birthday Picnic on Sunday September 24th, from noon to 6pm! Click here for more info! [More]

A ton of interesting new films are out on DVD this week. Take an early look on our 'DVD Tuesday' feature...every Monday! Check out some TV goodies like 'Battlestar Galactica - Season 2.5', 'Everybody Loves Raymond - Season 7'. Be sure to check out the 'Boris Karloff Collection', 'Chucky: The Killer DVD Collection'. Personally I'm excited about 'He-Man & The Masters of the Universe Season 2 V.2'. Check out the whole list here! [More]

Pippin Skywalker writes: I am herein endeavoring to give a faithful account of the spectacles and debacles that made up the wonderful Oxonmoot 2006. This year the event was held at Somerville college, a serenely beautiful 19th century college with beautiful gardens and shire like flowers growing everywhere. It was a very mild september weekend and wonderful for the events which were held in a tent set up in the main college quad. This tent known affectionately as the Marquis, served as one of the main locations of the lectures and festivities. [More]

One 'Dork' Movie To Rule Them All

South Bend, IN September 2006 -- It's "One spoof to rule them all! according to Peter Lyon who designed and created the hero swords for Peter Jackson's "Lord of the Rings" film trilogy.

The First Annual Movies.com Reader's Poll has nominated TheOneRing.net as one of the best 'Unofficial Movie Sites' of the year. Head on over to the movies.com poll site and be sure to vote for us to win! The results will be posted online soon!

One neighbourhood to rule them all. That's the dream of the creative masterminds behind The Shire, an imaginative new housing development in Bend, Ore., inspired by the architecture, spirit and places in The Lord of the Rings.

In addition to borrowing its name from the J.R.R. Tolkein novels -- The Shire is the mythical home of protagonist Frodo Baggins -- the subdivision recalls the trilogy through such features as faux thatched roofs, medieval signage, fireplaces with Rohan carvings, an irrigation canal dubbed Brandywine Brook and maintenance sheds built into the hillside to look like hobbit holes. [More]

Aintitcoolnews.com's Quint recently sat down with Peter Jackson to discuss a whole slew of projects he has lined up. The last segment of the interview discusses his work (or lack thereof) on The Hobbit! Take a look! [More]