Today Weta Limited announced they will be creating, in collaboration with BBC Worldwide, a line of Collectible statues based on the popular television series, Doctor Who.

Doctor Who is produced by the BBC and is the longest-running science fiction television series in the world. It follows the adventures of a time-traveller called ‘the Doctor’, who travels time in a phone box, solving problems and righting wrongs. [More]

SINGAPORE (AFP) - British actor Ian McKellen on Tuesday urged tightly-governed Singapore to loosen up and repeal its archaic laws barring homosexual acts. The openly gay McKellen indicated the laws, which are remnants of British colonial rule, may affect a vibrant business city like Singapore, which is vying with other Asian cities to draw more foreign talent and professionals. McKellen was in Singapore as part of the Royal Shakespeare Company's world tour to stage William Shakespeare's "King Lear" and Anton Chekhov's "The Seagull" at the Esplanade, Southeast Asia's most modern performing arts centre. [More]

Film star Orlando Bloom's stage debut in London's West End has met with a broadly positive response from critics. Bloom, best known for his role in the blockbuster Hollywood franchise Pirates of the Caribbean, stars in a revival of the David Storey play In Celebration. [More]

Moguls to get more film aid

The Government has boosted sweeteners to big-budget movie-makers such as Peter Jackson to head off a threat from across the Tasman. The sequel to the Government's existing grant scheme for big-budget screen productions, unveiled yesterday, follows moves in Australia to lure such productions with generous subsidies that outstripped New Zealand's. But the move has raised fears of small, local film-makers being left out in the cold - and questions about the Government propping up big-name Hollywood players such as Jackson. ACT leader Rodney Hide said the Government would lose a bidding war with Australia and giving money to established blockbuster film-makers was a case of "robbing Paul to pay Peter". [More]

Xoanon here, I am not sure what the details are yet, but an eagle-eyed fan pointed out to me that the official site for DAY ZERO (dayzerothemovie.com) has recently been updated to tease a theatrical release. The film, which follows Elijah Wood, Chris Klein, and Jon Bernthal for a 30 day countdown after they receive their draft notices, recently had its world premiere at the Tribeca Film Festival in NYC. Poking around the site I found some great reviews here and here, including one which calls it Elijah's best performance yet. We'll have to wait and see I guess. Did anyone catch the premiere at Tribeca? What did you think?

Discuss this in our forums...

Rachel, Web Content Manager for Weta, sends this along: Tomorrow, Weta Workshop's Senior Prosthetics Supervisor Gino Acevedo will be interviewed on National Radio's Nine to Noon programme. Gino will be interviewed by host Kathryn Ryan on National Radio's Nine To Noon programme about his work on King Kong and his little known conservation projects. The interview will broadcast on NZ Tues 17 July at 10.05am. Take a listen to the archived interview here.

Liv Tyler: Star in Ascendance: Her First Decade in Film by Thomas A. Christie. A new study of the films of Hollywood star Liv Tyler, charting all of her film career up to the present - including Armageddon (1998), Cookie's Fortune (1999), One Night at McCool's (2001) and the Lord of the Rings movies (2001-03). This is the only in-depth exploration of Liv Tyler's films available anywhere. [More] [Order from Amazon.co.uk]

A Bloom with a view

ORLANDO BLOOM has a confession to make. When he was first sent the script of the David Storey play In Celebration, he "didn't know who David Storey was". And the ignorance, it seems, was mutual. "No, I'm afraid I hadn't heard of Orlando," the playwright happily confesses. As Bloom prepares to star in a London West End revival of Storey's work, this parallel blankness is perhaps unsurprising, these two theatrical collaborators coming from contrasting branches of culture. The 30-year-old actor has never appeared professionally on stage, having spent his whole decade as an actor in epic films, including Troy and Kingdom of Heaven, with a special line in high- octane trilogies: as Legolas in The Lord of the Rings, and as Will Turner in Pirates of the Caribbean. [More] 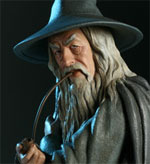 Sideshow Collectibles has started taking pre-orders for their latest Legendary Scale collectible. Gandalf the Grey is the fourth character in the line of Legendary Scale Lord of the Rings busts and the first human character to be offered. The piece stands approximately 14" H (356mm) and will ship during the 4th quarter of this year. There is an exclusive edition (only available at the Sideshow website) which includes an additional 'Moria' staff. The best part of this release? At $149.99, the price is reasonable! Other releases in this line have been upwards of $250. Check out the full details through the following link. [Pre-Order Today]

Ronan takes the role of Susie Salmon, the central character in Alice Sebold's 2002 best-seller. The story is told through the voice of Susie Salmon, a young girl who is murdered but continues to observe her family on Earth after her death. She witnesses the impact of her death on her loved ones, while her killer skillfully covers his tracks and prepares to murder again. Weisz and Gosling are playing the grieving parents in "Bones," whose script was written by Jackson, Philippa Boyens and Fran Walsh. Paramount Pictures is distributing the feature. [More]

Massive Multiplayer Online Games (MMO's) (such as online Lord of the Rings) may soon be redefined and classified as official online gambling sites under the remaining provisions of the Gambling Act 2005. The new laws will create a single definition for gambling - as any and all games which incorporate the use of both chance and skill in order to win a prize.

According to the revised Gambling Act, "prize" includes cash, products, and virtual prizes that hold monetary worth, and "games of chance" as any game which involves elements of both chance and skill, or where superlative skill can eliminate chance. The new law will treat all MMO’s that run competitions or offer prizes in the same manner as an online poker site, or any gambling site for that matter. As a result, they will be subject to the laws and penalties as these more traditional forms. [More]

When Leonardo DiCaprio's "The 11th Hour" trailer went up on his MySpace page, the site got overloaded with so many trailer views that the stat counter started going backwards. When Bruce Willis jumped into an Aint it Cool News chat to defend "Live Free or Die Hard," the fanboys flamed him until he turned on his iChat camera and proved his identity. Then they warmed up to him. The guy who turned him on to Aint it Cool News in the first place was another star with a comeback sequel: Sylvester Stallone. When Steven Spielberg started filming "Indiana Jones 4," he posted a video of himself popping champagne on IndianaJones.com. His photo of Harrison Ford slouching in his Indy costume spread through Cyberspace like wildfire. The dynamic between celebrities and their audience is shifting. The critics and the media no longer have the last word. Thanks to evolving technology, moviemakers and stars have new weapons to not only promote their projects directly to moviegoers, but to fight back against what they perceive as misinformation. They are taking advantage of their Internet fanbases to promote their projects, skipping the marketing middlemen and interacting directly with the people who buy tickets. Fan sites offer them valuable feedback about what their audiences like and dislike. But they also offer an opportunity to set the record straight. And sometimes, change the world. [More]