Today, July the 11th marks the 9th month in production of Peter Jackson's Lord of the Rings Trilogy. Currently the entire crew is on a six week hiatus, and most of the cast has scattered. Work will resume very shortly, but they are all on a very well deserved break at the moment!

Cast Watch: Jedi of Many Colors?

Our good pal Paul Ens and the folks at Starwars.com are confirming rumors that our very own Christopher Lee (Saruman) will play a rogue Jedi Knight in Star Wars: Episode Two, currently working with the title 'Star Wars: The Movie with Saruman in it'...

EXCLUSIVE: Conway NOT in LOTR

IS Kevin Conway going to be in LOTR? The answer is a simple NO, want to know why? [More]

Ian Mckellen (Gandalf) recently spoke to Starlog Magazine concerning LOTR. In the interview McKellen reveals how much they've shot so far, what he's done, White vs Gray, and his future plans! Read on! [More]

Our content partners, and banner advertisers IGN have scored themselves some great pics of some LOTR gear direct from WETA HQ!!! [More]
!!!Spoilers!!!

Don't know if you heard about this. Not that it has to do with upcoming movies, but in todays Kansas City (in the fyi section) there is an article about Summer reading. It gives a list of fantasy books good for reading, and mentions J.R.R.T. at the end.

Escapes into other fantastic worlds

The Hobbit and The Lord of theRings trilogy, by J.R.R. Tolkien. The Hobbit tells how Bilbo Baggins leaves his
sleepy home in the Shire to have adventures with a wizard and band of dwarfs. He then finds a magic ring that can make him disappear.

In the three books of The Lord of the Rings, readers find out that Bilbo's ring is actually much more powerful. Bilbo's nephew Frodo, along with a wizard named Gandalf and other helpers, must find a way to destroy the ring, or it will fall into the hands of its evil maker, Sauron.

I don't know if any of you know who DC Talk is, but some of you or your readers may be interested to know that Kevin Max, one of the lead singers of the band, had tried out for the part of Frodo before Elijah Wood had gotten the part.

How do I know this you ask? (sure..-Xo) well I was on his site at www.kevinmax.com and I sent him an e-mail to see if he knew about the LOTR movies (I knew that he was a fan of Medieval fiction) and as it turns out he is a huge J.R.R.T. fan and had actually tried out for the part.

LotR Text Sales ARE on the Rise!

Since my last post I've gotten a few emails concerning LotR book sales. A Houghton-Mifflin employee chimed in with, "Tolkien sales generally have doubled over the last two years..." and this growth is expecected to continue. The word is that although there was a two-week backlog of LotR single-volume paperbacks orders, HM Co is 100% up to speed. [MORE]

While this does not directly pertain to the Lord of the Rings, I thought I would share. If you are not a Mozilla (or Netscape 6 Tech Preview) user, you probably don't need to read the rest of this.

Note: These scripts can be used to display any RSS Source in your Mozilla Sidebar. If you are interested in getting a copy of the scripts stop over to my Mozilla Software page.

Harry Knowles over at AICN has confirmed reports about a possible fall or X-Mas LOTR Trailer in theatres. The toss up was between the Adam Sandler 'Little Nicky' comedy or the Kevin Costner 'Thirteen Days' Cuban missile drama, it seems the later has won the argument. So now we have a new item to mark down on our calendars, 163 Days to go until the December 20th release of 'Thirteen Days' in theatres...that's 3912 hours...234720 minutes....14083200 seconds...I've got a pocket scrabble set we can play with to pass the time...

Do I want to brag about this? Not especially, but the others will whine about it if I mention it afterwards without posting it as news. So if any of you want to laugh at our Kiwi accents, there's a report on the film thefts scheduled for Morning Report on Tuesday between 7am and 9am NZ time, that's Monday afternoon after 1pm EST.
The RNZ website should give you an audio feed from here
Kind of hard to navigate, but there's a 'Select' menu on the left with both the live audio feed and 'Morning Report.'

Film thief gets his day in court.

All that waiting around for about five minutes of action. The ex-stuntman accused of stealing film rushes from 'The Lord of the Rings' must have pleaded guilty (I missed that bit) and so he got to wait around a few more hours along with all the drunk drivers and benefit fraudsters. Then he was convicted on two charges, his bail conditions agreed on (he loses his passport and has to report to the court weekly) and that was that until sentencing, which will take place next month. He's still got name suppression.
It's all nothing like court on TV. The lawyers do a kind of ritual cringe towards the judge as they enter and leave, the accused vary between a sneer ( standard for violent offenders) and merely looking hangdog (like this film thief.)
Other than that, it's hard to make out what's going on. We'll bring you more news as it comes to hand.

Harry Knowles over at AICN is reporting that the LOTR trailers may be in theatres in and around X-Mas 2000. Concurring with our earlier report from July 6th which says it may be on the Adam Sandler movie 'Little Nicky' or, as Knowles states, the 'Thirteen Days' Cuban missile drama. Harry also received news on a possible schedule for more trailers.
Teaser 1 : X-mas 2000

More news as I get confirmation.

Tolkien and Potter, hand in hand.

I went to Wal-Mart last night to pick up a picture frame and was surprised to see the Harry Potter Books and the LOTR books (paperback, but not the single-volume) displayed together near the entrance. No one coming into the store could possibly miss it. Of course, a lot more of the Potter books were gone than the Rings books. But maybe the excitement kids have for Harry Potter will translate into many of them picking up The Fellowship of the Ring and, of course, having their parents take them to the movie next year!

If this arrangement is found at all Wal-Marts in North America, there could be a whole new group of Frodo fans getting excited for Dec. 2001.

The latest Empire Magazine (with John Cusack on the cover) - The Fellowship Of The Ring is listed as the number one film in the top twenty "in production". [More]

Cast Watch: Serkis is 'Among Giants'

You can catch Andy Serkis (voice of Gollum) in 'Among Giants' on Cinemax. [More]

Sale of LotR on the Rise?

Ringer flair15 dropped us a line indicating that Amazon.com had a (very short!) backlog of orders for The Lord of the Rings. Anyone else have some interesting scoop on this? Meantime check out our site store for links to some great LotR merchandise.

TOPIC: What is the Nature of Magic in Middle-earth?

Throughout the history of Tolkien's world, the use of what we call magic was a regular practice for both the side of Good as well as Evil. Spells are woven and cast, swords glow blue when enemies are close at hand, Sauron hurls fire from Orthanc, Burt the Troll's handbag talks, rings lend their wearers special abilities and powers... From palantiri to the rods of the five wizards, what is it all about? Elves don't prefer the word 'magic,' so what is it exactly?

In addition to this, we'll share our favorite magic moments. What is yours: the mirror of Galadriel, Luthien casting her spell on Morgoth, Bilbo's vanishing act, Gandalf encountering the winged Nazgul, or perhaps something else?

Two new items at the New Line store for you to get me for my Birthday! (splash of cold water), sorry about that.... [More]

Ringer Spy Andre and his better half Nicky report on the scenes that took place at Fernside Lodge. [More]

The infamous graffiti scrawl that began appearing on subway walls and bumper stickers in the late '60s, at the height of mania over J.R.R. Tolkien's Lord of the Rings trilogy, could start popping up again. [More]

The cool guys over at 'Cinescape' Magazine have a few things to say about LOTR. Calling the LOTR 'the first film series that could truly rival the Star Wars saga in terms of scope and vision'. Check it out in the latest issue of Cinescape (July/August 2000).

The latest issue of UK Movie Mag 'Starburst' has a small tidbit on LOTR. Click on the image to enlarge.

If You Haven't Heard Yet...

Shokwav32 reports in with this little find: "On the newest print (of the Lord of the Rings books), they have new artwork and at the top: "Coming Soon: an Epic Motion Picture from New Line Cinema"

The excitement continues to mount!!!!! Thanks Shok!

Radio New Zealand has a documentary on Sunday mornings (8:05 a.m.) called "Insight", which discusses New Zealand issues. Next Sunday (9 July) the topic will be the impact of the filming of LOTR on the NZ economy.

Xoanon Note: Any intrepid fan who could get me a tape of that show will be forever on my x-mas card list. :)

Update: Never before has it been so easy to win Xoanon's love and get on his X-mas card list. You can purchase copies of on air material at Radio NZ in their Replay Radio section. We will likely have more indepth coverage of what aired early next week, so you may want to hold onto your pocketbooks until then. (Corvar)

Our good friends at Cinescape send word on a Brad Dourif (Grima Wormtongue) article. In it Brad talks LOTR, and his views on Tolkien.

In taking on the Lord of the Rings trilogy, director Peter Jackson and his crew dare to tackle one of the most beloved works of fantasy fiction in history. Naturally, that leads to some pressure, especially from the legions of Tolkien fans, who want to see the books translated accurately to the screen. According to actor Brad Dourif, who portrays Grima Wormtongue in the film, Ring fans shouldn't worry about the accuracy of the upcoming films--the work is in good hands. [More]

The good folks at Ancanar.com send in news that they've updated a few sections on the site. Find out all about the indie film 'Ancanar' on the site [More]

Finally! Corvar, Jincey and myself finally sat down and hammered out the DragonCon report! [final report]

Food for thought: While this year's Con was absolutely amazing, just imagine what next years will be like! DragonCon 2001, Tolkien fandom rules supreme! 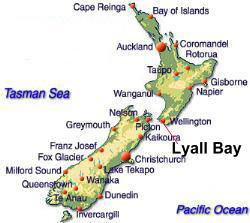 Ringer Spy Humphrey sends in these pics from Lyall Bay, which was recently privy to some filming involving Viggo Mortensen (Aragorn) as well as others. [More]

You can catch Cate Blanchett (Galadriel) in 'Pushing Tin' on Cinemax. [More]

NZ Horse and Pony gets the scoop on Shadowfax and the LOTR horses.

No wonder the editor was so rude when I rang to ask if I could write them an LOTR horses article....they were already onto it themselves! And they got a GREAT article since they were actually invited to watch the horses train. The full article is posted up at Der Herr der Ring, right here