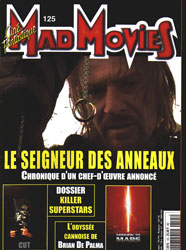 French Movie Magazine Mad Movies has beaten all other movie mags with their coverage of LOTR! They placed it on the cover (and has gained the respect of yours truly). This is the article with all around nice guy John Howe (click here to read the article). Great stuff guys!

The good folks at Cinescape have dropped me a line telling me about some promo ads New Line has out in a few trade mags. 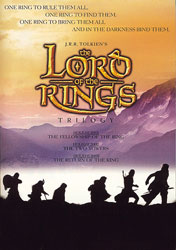 As part of the big licensing push for New Line Cinema's upcoming Lord of the Rings, an attractive piece of ad art has been seen in a number of trade publications. To spare you having to search for it, you can see it here. Click on the picture above to see a larger version.

You can see Sean Astin (Sam) in 'Toy Soldiers' on Cinemax. [More]

Super Ringer Spy JVC and his boss/head cook Ciggy have once again come up with the goods!

I've got 2 pics for you to ponder over, the first is the group of Nazgul chasing someone on a white horse. The other is a single Dark Rider reaching for you! It's darn scary if you ask me!

Ringer Spy 436x800 sends in the latest from an undisclosed company that New Line is trying to court to get merchandising contracts. These images showed up online a few months ago, yet no one knew what they were, now 436x800 spills the beans... [More]
!!!Spoilers!!!

The latest issue of Sci-Fi Magazine has a small article about the LOTR Trailer. It talks about what you can see in the trailer and the fansites involved.

The magazine also has an interesting interview with Christopher Lee (Saruman). While there is only a small mention of LOTR (Lee saying that he met Tolkien once many years ago) the article mainly talks about his past roles in the numerous 'Hammer' films.

You can catch Brad Dourif (Wormtongue) in 'Color Of Night' on Cinemax. [More]

Dark Horizons has a LOTR movie poster online! No offense to Garth from DarkHorizons, but it looks a little less then spectacular, so i'm not sure this is the REAL thing. From the digital manipulation that we have seen up to this point, I would say this is not on the same level. But, it does show some new images. Who knows! We will try to get confirmation soon. Check it out! [here]

Washington Post article on LOTR in their Sunday supplement, 'Bookworld.'

Not as ho-hum as you might think. Because it's written by Terry Pratchett. Pratchett talking Tolkien? You bet that's cool. Check it out here

Bet we can help this party go off with a bang...

I got this off the Otago Daily Times, a NZ paper:

THIS office often receives inquiries from around the world asking for contacts for people or organisations. One request several months ago, from Josephina Johnson, of Idaho Falls, sought a contact for the makers of Peter Jackson's Lord of the Rings film trilogy being shot in New Zealand. Our secretary was able to help and Josephina made contact with Peter Jackson and some of the actors.

IT has been the impetus for Josephina (miruvin@srv.net) to help organise a "world gathering" of Tolkien fans. The Tolkien Fan Fellowship Gathering will be held in Dallas, Texas, at Christmas 2001, the scheduled American release date of the first film, The Fellowship of the Ring . The meeting has so far attracted the interest of about 10 hard-core Tolkien fans from around the world.

While we're waiting for the inevitable 'Making of LOTR' docos.....

Anyone remember Tim Sanders? He was the other NZ producer on LOTR at the beginning of the project. He'd worked with PJ frequently before and was one of the three producers involved in setting up LOTR, but he left suddenly just after filming started. He's never granted anyone an interview or explained why he left. He may have opted for a more eloquent answer by means of his latest project.

Called 'The Distant Location,' the pitch for it goes: "When Hollywood comes to NZ for all the wrong reasons, the locals and Mother Nature exact a hilarious revenge."

Well, well, well. We'd love to know how it's release will be timed against the first 'Rings' film. Meanwhile, for anyone wanting to read a good comedy on a similar subject, I'd recommend Terry Bisson's "Voyage to the Red Planet," which could be subtitled 'When Hollywood goes to Mars for all the wrong reasons....."etc. I kept being reminded of the LOTR film project.

Sean Bean (Boromir) can be seen in 'Airborne' on Cinemax [More]

The Hall of Fire is ready for another chat event, this time a continuation of one from many moons ago. Do you have unanswered questions pertaining to Tolkien and Middle-earth?

They might be about characters, plot complexities, Middle-earth history, or about the Professor himself.

What's an ent? Who was Tom Bombadil? What happened to
the rings of the Seven Dwarf Kings? Why did Tolkien have a thing for spiders? Who were his peers?

Questions like these will be answered to the best of our ability, so join your Hall of Fire moderators and regulars on Saturday, June 17, at 5:30 EDT, to put your mind at ease. ; )

Place: #thehalloffire on our server, theonering.net....accessible through your own chat client or our site's java page

This is slightly offtopic, but the Gormenghast series is one that is bound to interest fantasy fans everywhere. I've had a lot of mail from UK viewers since mentioning that the BBC series is screening in the States now. It seems that opinions differ wildly. A good summing-up came from Aelinwen:

"This is in reply to the comment you got from on UK viewer on the Gormenghast production. I think that the BBC went for a very brave interpretation of the text as a black comedy, rather than a gloomy gothfest. As such, once devout readers got over the initial shock, it opened up new delights I had not previously seen in the text and, no doubt, worked better as television and brought new readers to its dense, complicated pages."

A further comment from A. G. was also interesting:

"The British press, as on most fantasy and sci-fi, split right down the middle - either loving it or loathing it. One called it Gormenghastly, but MANY gave it 5-star reviews and it was pick of the day in many national papers.

It's well worth a look, with some fine performances, and great looking sets. The narrative is FAR too fragmented, so the thing has no cohesion, but as with Terry Gilliam's films, a cohesive plot is not what the Gilliamites go for.

It's out on DVD in the UK, a DVD that recently won an award for it's presentation..."

Sir Ian has updated his E-Post and his letters answer some fan concerns about Arwen, among other things. (more) 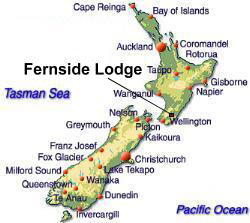 Ringer Spy Mr. Tadpole sends along some information regarding a possible new set on the North Island. Looks like Lothlorien to me! [More]

Beren over atTol Galen got good news this week! Find out who Robyn Malcolm is REALLY playing, and what they've been filming in the Wairarapa! It's all here

Hmm, rivers round the Wairarapa? When I scouted down there last year, the Tauherenikau seemed a good contender for Middle-earth...

The band 'Blind Guardian' gets mentioned frequently in relation to Tolkien. I've put a bit of feedback from a satisfied new Blind Guardian fan over in the shop You can take it from there....

Gormenghast again.
I've had two bits of feedback on this. One from a UK viewer, who said the whole production was very disappointing....or at any rate, he felt it avoided the 'darkness' of the books and treated them almost as comedy. 'Gormenghastly', the British press called it.
Nevertheless, it's probably still worth a look. If only so we can squirm a bit wondering if this is the fate of all fantasy adapted for the screen....
Another person pointed out that the series is available on video already, so go here if you want to check that out.
Thanks to Les and /iVilDeD for that.

The Hutt Hobbit and his friend Salome have observed the filming at Helm's Deep over a long time. Today he tells us how it was in the beginning. (more)

Filming in the Wairarapa

I was reading on your site that you were wanting to know what it was that they were shooting in the Wairarapa (somewhere around Martinborough). Well, I don't know much, but I've heard they're shooting the scenes with Cate Blanchett (Galadriel).

Apparently, also on set are Craig Parker (Haldir) and John Leigh (Hama), as well as lots of Elves. They finish up there this Friday.

These pics originally popped online at my good buddy Garth's 'Dark Horizons' website. Thanks to Ringer Spy Sadogoat we've managed to get our hands on some larger versions! [More]
!!!Spoilers!!!

The Gamespot website had a newsbrief about the LOTR video game that's being developed in conjunction with New Line. (more)

Are you a Gormenghast fan yet?

This is more of a literary note, but I thought I'd alert you fantasy fans to a BBC series currently screening in the States which ought to fulfil our appetite for good onscreen fantasy while we wait for LOTR to start... Mervyn Peake's 'Gormenghast' books are rich, ornate, enthralling fantasy - hard to read, but wow, this BBC production sounds like it'll bring Peake's masterpiece wonderfully alive. I can't wait til it gets to NZ! I might even be forced to buy a TV!Check it out here

(Oh yeah. It's got Christopher Lee (Our Saruman) in it, no doubt doing something deliciously EVIL....Nope, I've been informed I'm wrong. Lee gets to play a good guy. How often does that happen?)

Lately there's news of filming over in the Wairarapa, that flat green plain that's seperated from Wellington by the currently snow-covered Rimutakas. Jonny from The Realm of the Ring went over to see where the locations were being set up: we knew that the Carterton showground was being used in case of bad weather, but Jonny managed to find a fairweather location, it seems. (more)

That's right 2 of the star's from PJ's first film 'Bad Taste' Barry (Pete O'Herne) and Giles (Craig Smith) are going to be answering YOUR questions on June 23rd at 7pm in the TBHL chat room. They'll be answering questions on Bad Taste, Experiences with PJ, Opinions on LOTR etc. [tbhl]

Whoops, we got the wrong showground....

DW wrote to us concerning the film location being set up in Carterton:

"I have recently returned home to the little old Wairarapa, and was excited to find that the Claireville showgrounds was to be a filming site. I was rather confused to see the pictures that you showed of the showgrounds. It seems that the pictures you have of the Clareville Showgrounds are actually pictures of the larger and more impressive Palmerston North Showgrounds.

Oh well. Whoops. You get the general idea. Where might they be filming if the weather doesn't drive them into the showgrounds?
Well, there's this kind of stuff in the area...