The latest issue of SFX Magazine (June #65) has a small interview with Christopher Lee (Saruman), in it he discusses LOTR:

'I've only just back from two months in New Zealand filming Lord of the Rings,' says Christopher Lee matter of factly, his sonorous tones still strident as always. 'It's just going to be...I'm trying to think of the right word - without making sound like the usual fashionable superlative. I think it will create film history. I think it's going to have the biggest impact, on screen, of anything of the last 40 or 50 years.'

And he says the teaser trailer s nothing compared to the full impact of the movie.

'I don't know what you'd call it, it's not exactly a trailer. It doesn't actually show you anything in great detail, in terms of people and what they look like and what they say.'

Click on each image to view in our scrapbook

Q and A with Fantasy Author Terry Brooks

Gandalf works his magic! Check out what Brooks had to say about writing, Tolkien, and the Lord of the Rings. [MORE]

Super Ringer Spy Xtem sends word on the filming going on in and around Ruapehu the last few weeks. Funny man Bernard Hill, how Hugo Weaving really looks and how it is to work with Viggo Mortensen! [More]
!!!Spoilers!!!

I'm running a week long Lord of the Rings cartoon punchline contest parodying that Weathertop scene in the trailer where the four hobbits confront the Ringwraiths. It features caricatures of Frodo, Sam, Merry and Pippin. The reader has to come up with a punchline from either Frodo or the Ringwraith (or both)! At the end of the week, the funniest punchline is voted on by readers. If you think you can come up with a funny punchline or would like to read everyone else's funniest entries, browse on over here.

The good folks at Hughton Mifflin have chimed in with news on a few new books available at Amazon.com [More]

You can catch Sean Astin (Sam) in 'Boy Meets Girl' on TMN. [More]

The Lighter Side of Tolkien

Recently I posted a bit about Leonard Nimoy singing a hobbitish kind of song called The Ballad of Bilbo. Thanks for all of you who sent in a response, and for those of you curious about hearing this little ditty or SEEING it (!) you can link to The Tolkien Collector to check it out. Thanks to Matt for the tip!

TheOneRing.net's chatroom Barliman's has a new logo and some exciting updates. Check out our spiffy new photo gallery and recent changes to our Map of Regulars. Come and join the throng right here! Thanks to Nob, Pipesmoke, Calisuri and Corvar.

The NZ Listener has scored themselves an interview with our very own Liv Tyler (Arwen). In the interview Liv discusses LOTR and other projects.

Click on the image to view the full article

I thought you'd like to know that the Lord Of The Rings Preview was mentioned in the June 2000 issue of Empire, one of Great Britain's and Ireland's best-selling film magazines. Accompanied with a spread of photos from the preview itself, it goes like this:

With anticipation growing hotter by the day, these brand new pictues have just been released from Lord of the Rings, which continues its mammoth shoot in New Zealand with the likes of Ian McKellen, Cate Blanchett and Elijah Wood on board. Those with internet access can glimpse some fantastic exclusive footage at www.lordoftherings.net, but for the time being, cast your eyes of this little lot [referring to the photo spread] -- and the good news is there'll be plenty more over the coming months.

I saw Bernard Hill on Saturday, May 6, at Old Trafford, the home of Manchester United FC, where he was at the club store with what I guess were his two sons.

He was almost unrecognisable from Captain Smith in Titanic. His hair, now grey (not white), was almost shoulder length, but had been cut in such a way to give a full appearance from behind. He had beard/moustache, also grey, but only slightly longer than that which he had in Titanic.

I didn't attempt to bother him, as he was clearly out with his family. I immediately recalled TheOneRing.net's news that he was to play a role in LotR but couldn't figure which one at first. He now appears perfectly cast. 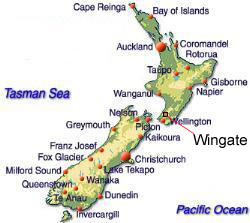 Filming is being done in Wingate now, in Lower Hutt... drove up to the entrance and they were doing a lot of filming 20 meters from the road.

Filming The Lord of the Rings: What Has Come Before

While all the buzz surrounds the development of The Lord of the Rings by Peter Jackson and New Line Cinemas, it is worth taking a look back at the first attempts to move Tolkien's epic story from the page to the silver screen. The year was 1978, and the entire chronicle of the Ring and the hobbits was brought to television and the silver screen, from Ralph Bakshi's The Lord of the Rings to Rankin-Bass' The Hobbit and The Return of the King. Tolkien fans were given much to regret. [More]

Special guest lined up for our next site Event. More news Wednesday and here. : )

What was it like actually seeing Gandalf leading a charge down from Helm's Deep? The Hutt Hobbit was there and saw it all! (more)

Check out the list of questions, compiled by Gamgee and submitted by YOU the fans, for the upcoming TheOneRing.net exclusive interview with Dungeon and Dragon's creator Gary Gygax . [more]

The Hall of Fire is ready with a new topic for today at 5:30 EDT [-5 hours GMT]. Bring your Director's Chair with you this time, as we take a look at a beloved Tolkien book through the eyes of the movies.

The Silmarillion on Film

Imagine you win the challenge of creating The Silmarillion on film. Like Jackson's effort on The Lord of the Rings, the task would be enormous and daunting to say the least. Uncountable questions would need answers, like: who would you cast as the characters? Which characters and events would you cut out? How would you approach the project?

We'll also play around with general Silmarillion film questions, like what scenes we'd love to see on the big screen, how the creation of Arda would be portrayed, and what places would make great locations. Read up and bring along your text for this one!

Ianman continues his story of the filming up at Ruapehu

Last month Ianman spent a few days looking at what they were doing up on Mt.Ruapehu and we've been enjoying installments of the photoessay of his adventures (more)

The Gates of Moria?

More news has come in on the doings at the new Wingate set in Lower Hutt, which is just outside of Wellington. Read all about it in Spy Reports
Somebody get down there with a camera, please! It's on the main trunk line, for pete's sake! [more]
Meanwhile, Jonny over at The Realm of the Ring has some photos that sort of whet the appetite for more.

The Lighter Side of Tolkien

... and now for something completely different!

My buddy Therm sent me this link a while back of a page talking about Leonard Nimoy singing a song called The Ballad of Bilbo Baggins. Do you have any other strange and interesting Tolkien-related links to share? Please send them in here.

Ringer Staff member Gandalf recently talked with Terry Brooks, author of the Shannara Series, and asked him some questions about Tolkien and writing in general. Look for this exclusive question and answer session this Monday!

You can catch Liv Tyler (Arwen) in 'Cookies Fortune'.

You can see Bernard Hill (Theoden) in 'Titanic'.

Kevin Conway can be seen in 'The Confession'.

You can catch Christopher Lee (Saruman) in 'Dracula'.

Every year the National Business Review lists NZ's richest individuals and families, and this year they've got Peter Jackson heading the 'emerging rich' list. He is said to be earning an eight-figure fee for the LOTR trilogy. Who exactly said this isn't stated; it's not the sort of thing the the film company's publicists would chat about, let alone Jackson himself.
"That fee and future royalties are likely to make him seriously wealthy," says the NBR.
Not a bad way to earn a living, either. Good on ya, mate!

I don't know about you, but the latest Pearl Jam album cover looks a lot like the Eye of Sauron. A Ringer fan thought so too when he sent me this image last December. [more]

While it doesn't pertain to Tolkien, it sure pertains to TheOneRing.net. We lost power for about 4 hours; thankfully everything is back up. Hopefully we didn't inconvenience anyone too badly.

The News from Mithril

The good folks at Mithril have chimed in with the latest news from the land of miniatures. [More]

The latest issue of Cinescape Magazine features our very own Ian McKellen (Gandalf) in the 'Star of the Future' section. The one page article talks mostly about McKellen's foray into the world of Magneto in the upcomming 'X-Men' film. However there is a small blurb about LOTR:

So after his detour to Fantsayland via X-Men, was McKellen eager to get back to the Bard? Not at all. Even before he was finished working on X-Men, he was preparing for his next foray into fantasy filmmaking. "Once I felt on top of the problems of playing Magneto, I started examining the Lord of the Rings scripts," writes McKellen, who will play the wizard Gandalf in Peter Jackson's adaptation of the classic trilogy, "usually at weekends so that I wasn't to distracted from the X-Men x-perience."

To read the entire article click on the image above.

Mike Goodridge, from screendaily.com in Cannes

New Line International has slotted the final key pieces into the worldwide distribution structure on its ambitious $300m Lord Of the Rings trilogy currently shooting in New Zealand. The Time Warner owned studio is now rallying its partners for a massive coordinated promotional and merchandising blitz for the worldwide simultaneous release of the first film The Fellowship Of The Ring on Dec 14, 2001.

Xoanon note: If New Line decides to go for that worldwide release of FOTR we can have history in the making here folks. Can you image all those drooling rabid LOTR fanboys from Japan to Jamaica, Montreal to Moscow, all watching FOTR on the same day!?

Karl Urban, the man playing Eomer, is at the Cannes Film Festival at the moment. He's in two New Zealand films that are being screened there, 'The Price of Milk' and 'The Irrefutable Truth about Demons.'

Thanks to Kimi for that news.

The Mirror of Galadriel!

Super Ringer Spy Galadriel gives us even more info on all of the latest on a Lord of the Rings set! Aragorn and Gandalf, Helms Deep and Ents! We're finally hearing news on the Ents!! [More]
!!!Spoilers!!!

We invited Margaret Weis and she brought two friends along! We had a crowd of over 60 and it was a great chat. Check out the log in our events section. [ Log ]

On behalf of TheOneRing.net and all the guests at Barliman's tonight, our sincerest thanks to our wonderful visitors. Come back and see us!