According to TORN fan Barbarshop it looks like Liv Tyler (Arwen) will be the first guest on Connan O'Brien this Thursday night, 4/26/01. A bit late for me... but hopefully not you!

David Lenander, BreeMoot aficionado, has sent us the link to the convention schedule, check it out if you want to attend. [More]

Thanks to a heads up by Ringer fan Lyons we jump back to Silentman's site today. Check out a great shot of a Nazgul on a dock and some wicked looking Orc with an axe. !SPOILERS! [More]

GAMING: The Battle for Middle earth

Thanks to Krosshair for sending in these scans of the April 15th Red Herring Magazine which features a rather telling story on the battle for LOTR video game rights. [More]

Ringer Spy Marwën sends in the latest news on a LOTR based stage play in Montreal. [More]

thesilentman (via AICN) has posted some great pics of some Orcs battleing it out! Check out these great pics! !!SPOILERS!! [More]

New Line's Town and Country should make us worry?

Lovely Liv Tyler (Arwen) will be promoting her new movie "One Night at McCool's" this week, so expect to see her everywhere! (I saw her on Letterman last night, no LOTR mention though)

Moriarty over at AICN reports the LOTR Trailer is on the Little Nicky DVD. I guess its pretty well hidden, because no one knew about this little easter egg. Check out his full report for instructions on how to find it. [More]

Many of you remember that Sierra was planning to make a huge online role-playing game based on LOTR. Then it all went pear-shaped and the whole project was apparently cancelled. But wait! Not quite! There's more! Inside has the story.

Thanks to Alex for the tip.

Ringer fan Ryan sends us news of a nice article about Liv Tyler (Arwen) in today's LA Times. You can view the article at their website. [More]

Unfortunately, the story doesn't quite have its facts straight:

"Based on J.R.R. Tolkein's fantasy epic about the ring of power and Frodo and company's attempt to destroy it, "Rings" has a huge built-in audience, the literary equivalent of "Star Wars" - although, as it turns out, Tyler's character, an elf queen, is not in any of the books."

Oops! At least this time we don't have any mention of Galadriel's evil sister Queen Beruthiel. heh

The Price of Collecting...

For the past week I have been communicating with Chris Z about Sideshow WETA collectibles and the potential of going broke buying Lord of the Rings products. He was kind enough to write us an article detailing just exactly how much this obsession might set us back. [More]

Liv Tyler (Arwen) was on the NBC Morning show 'Today'. She was on at about 40 minutes after the first hour if anyone on the west coast want to catch her. No mention of LOTR at all mind you.

If enough people believe in a thing sometimes it becomes real. Like this game....[More]

Another great chance to see your favorite LOTR star on the small screen this week. [More]

GAMING: More on LOTR: The Search

Ringer Spy Olorin sends in info on the LOTR based board game 'The Search'. [More]

Another LOTR board game?

Ever heard of a game company called Melkor-Bradley? Me neither, but now thanks to Ringer spy Nate I can direct you towards the homepage of their fine products. As well as the LOTR board game, don't forget to check their other board games 'Anna Kareninopoly' and 'Jane Eyre's Chutes and Ladders.' They have some nice deals going with Arizona real estate and the Brooklyn bridge too. [More]

An interview with two musicians on the LOTR soundtrack!

Camilla Maling of Radio New Zealand caught up with two of the musicians who will feature in the 'Rings' soundtrack and they were able to talk about how their Celtic music will become part of Howard Shore's score. [More]

The new issue of The New York Times Book Review has an article on Tolkien called "Hobbits in Hollywood." It's a curious piece, a mixture of irrelevant commentary and snide condescension. It gave Green Books staffer Turgon indigestion. Read the original article, and then read Turgon's comments. [ Original Article ] [ Turgon's Comments ]

TheHall of Fire chat room hosts three sessions this weekend to work over what I'd call an awesome topic: Female Characters and Tolkien's Middle-earth. For details and a time zone near you link here.

From Fan Art to WETA Digital?

Some fans have sent me email asking if the fan artist "Sull" works for WETA Digital. After initially thinking this was insane, I realized, they might be on to something! [More]

So we all know April 22nd is Earth Day, but did you know that April 20th is Middle-earth day? Well, neither did I, but in Ringer fan Alec's school they are celebrating in classic Tolkien style! [More]

Nona at the Compleat Sean Bean sends us her exclusive interview with Boromir himself:

"...I spent 90 minutes in conversation with Sean, during which we chatted about Lord of the Rings and many of Sean's other projects...as well as a few of the things which are close to his heart...and what scares him :) There are a couple of outstanding questions answered, for everyone who was wondering - what does Boromir sound like...and what about that famous LOTR tattoo...."[More]

Members of Dublin band 'The Barleyshakes' are set to record some music for the Rings soundtrack while they are in New Zealand - and they're playing at Wellington's 'Shepherd's Arms' tonight and tomorrow night! [More]

Well, after days of seeing the images online, we can now finally surf to the official Sideshow WETA Collectibles webpage. Among other things, check out how much these babies will be setting us back! (I'll be posting a story tomorrow from a fan about the total cost for being a collector...its pretty scary!) [More]

Ringer Spy Hamish sends along a small article from 'The Northern Advocate', from Whangarei NZ. It's about the big Rings fiesta at this years Cannes. [More]

During the past week, movie fans have voted on FilmFour.Com for their top ten favourite British Movies. After much voting, the brilliant 70's film by Christopher Lee (Saruman), The Wicker Man came in at a very respectable number 5.[More] 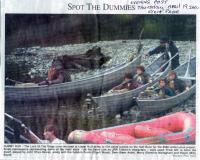 Yesterday's evening Post (Wellington, New Zealand) contained a large photo on the front page showing filming of the fellowship (made up of stand in dummies) in their elven boats on the shores of a river. Looked pretty cool, with Gimli in the larger boat and two hobbits each in the two small vessels.

Thanks to PH as well!

Ringer Spy Garth sends in the following from topcowstore.com. [More]

Lifesizestandups.com is selling...guess what?! Life size stand ups from LOTR! Gandalf, Saruman, the four Hobbits and Frodo! Check it out! [More]

Brad Dourif (Wormtongue) talks LOTR, and what scares him! [More]

EmpireOnline.co.uk has an interview with Liv Tyler reminiscing about middle-earth, her excitement for the upcoming release of FOTR and how her elvish ears would melt on the dashboard of her car. [More]

TheOneRing.net's World Wide Ultimate Fan Search 2001. Think you have what it takes to be the world's biggest Tolkien fan? Maybe you have the word "STRIDER" tatooed across your forehead, or perchance you had to rent a boxcar to house your collection of Mithril Miniatures. Either way, We wanna hear you story! Who knows? Maybe you will prove to be the biggest Tolkien fan in the world! [More]

I was randomly searching the web today when I ran across some more images of the Sideshow WETA toys. Action Figures Times has a small page full of the toys show at this year's ToyFair. The images on this page are not all new, but there are some cool ones of Saruman and more helmets. SPOILERS [More]

LOTR Poster at my local Cinema

Many of you have written in expressing great joy at seeing the LOTR poster at your local cinema. It just makes the whole event so much more REAL when you see it outside the confines of cyberspace. These movies are REALLY going to happen! and soon too! [More]

8 Months until we're all sitting in that dark room, when the curtain splits open, everyone 'shhhhhhes!' eachother....and we see those words....
New Line Cinema Proudly Presents...

..see you in line

Saruman and Orthanc looks stunning! and Lurtz is a monster! Basically these 3 pics are of Saruman and Lurtz in Orthanc. Really amazing pics here, a must see. !!SPOILERS!! [More]

"The retail prices will vary depending on the size of each piece, but expect the busts to be in the $45-65 USD range, the helmets to be around $25, and the statue figurines to be around $100 for a human character."

So I guess they will be too expensive for me, and those in low level jobs, to get the whole set! heh! If you haven't noticed, Harry over at AICN has been posting very high resolution images of these collectibles.

AICN has posted some set pics from the latest Cate Blanchett (Galadriel) movie 'The Shipping News, currently filming in Nova Scotia. No pics of Cate yet, she is set to join the set in June. [More]

You can catch a positive review of the latest Liv Tyler (Arwen) film 'One Night at McCools' over at Darkhorizons. [More]

Ringer Spy Hamish sends in an article about the official site reaching the mass amount of numbers they've amassed so far.

GAMING: Lord of the Rings: The Search

Rio Grande Games has a small blurp of news regarding a new game called 'Lord of the Rings: The Search'. [More]

www.xenite.org has some rather HUGE articles called 'Welcome to Wellywood'. [More]

Okay, well, Harry is taking his time showing us ALL the scans of the Sideshow WETA Toys, but its all in good fun! At least every 12 hours or so we get to see some new ones! Check out the latest 'Wave 1 of Busts' which include Gandalf, Pippin, a Moria Orc Swordsman, Frodo, Aragorn and the Orc Overseer! SPOILER [More]