This news comes to us from stuff.co.nz, as well as a certain friend who lives in New Zealand:

Harry at AICN has posted even MORE images from Sideshow WETA toys. Boy, I hope these aren't going to be as expensive as they look! Check out the details of Frodo, Gandalf and an Orc Overseer. SPOILERS[More]

Take that, Harry, Spidey, and Crocodile Dundee! LOTR is #1 on movies.com's weekly list of most-anticipated movies. Thanks Pippin_Took, for the head's up! [More]

Hugo Weaving (Elrond) recently spoke to the folks at eyada.com. Check out his audio interview where he talks about Russian Doll, The Matrix, and, of course, Lord Of The Rings. [More]

Ringer Spy Caradoc sends in two pictures from 'Toy Soldier Magazine'. Check out the metal Frodo they've got planed for our toy chest!

The folks at Ancnar.com have posted a new five-minute making-of short, entitled "Creation,". Included are interviews with the cast & crew, stills, production notes, and the first footage released from Ancanar to the public. Ancanar you will remember is the indie Middle-earth based movie currently in post production in LA. [More]

Eyada.com was kind enough to call us today and request an interview. So if you've got the mojo to come listen to yours truly at 4:30 PM ET. Drop on by to eyada.com! [More]

After a long Easter holiday, imagine my surprise when my good friend Bondgirl tells me she was at a bar with Liv Tyler (Arwen) last weekend! [More]

Harry over at Aint-it-cool.com has landed a few hi-rez absolutely beautiful images from Sideshow Weta Toys. He's got Lurtz and some REALLY cool orc helmets. Check it out! SPOILER [More] and [More]

The latest Aragorn picture (see below) comes attached to an article that had one or two bits of information that seemed new, including Peter Jackson's description of how they've made their own animated 'rough cut' of the films that they work from as a guide. [More]

Ringer Spy Shane sends in this new pic of Viggo Mortensen in all his Aragorn glory! !SPOILERS! [More]

Liv Tyler (Arwen) graces the cover of 'Elle' Magazine for thier May issue.

Liv is also featured in the movie magazine 'Famous'. 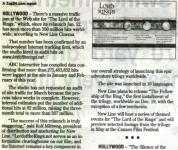 Ringer Spy losloth sends along this article from The Tampa Tribune in Florida.

This came in from Ian:

"Jokes on TV3 news this evening about PJ writing The Lord of the Wings after his beloved WWI Sopwith Camel had trouble in an airshow. Part of the engine cowling came off and after being sliced and diced by the propeller part of it got wrapped around a wing. The pilot brought it down without further problems."

More news on the music.

Interesting things are being said about both the Howard Shore soundtrack and the Tolkien songs that are to be included in the movies. [More]

Nothing beats Easter dinner with your family...except our weekly EBAY items!! [More]

More on Lutrz and The Opening Scenes of FOTR

The ultra cool UK magazine 'SFX' has gained some info regarding some changes PJ has made to 'The Fellowship of the Ring'. While not following the book 100% (which I have always maintained is impossible) PJ uses text from 'The Silmarillion' to gain some inspiration. [More]

Marton Csokas (Celeborn) has been a busy Kiwi. Catch up with his latest 2 projects while eating your easter chocolates. [More]

Another chance to catch your favorite LOTR actors on the small screen! [More]

Ringer Spy Caradoc sends in word that W, Britains will be making LOTR Statues (a la Mithril Miniatures) for the film. Now this will hopefully be some decsent collectables that the true Tolkien fan would go for. I know that I would love to play, er, collect my Gimli and Boromir statues. I'll let Caradoc tell you the rest. [More]

This morning, CTV (Canadian Television Network) briefly spoke about the LOTR trailer on the official site. They said that the LOTR trailer has at this time been viewed by 350 million people, and that Newline Cinema doesn't know what to make of it. They said Newline cinema is thrilled with the results, or number of downloads, the trailer has had in the last weeks.

Thanks to James for the tip!

We've had some excellent chats in The Hall of Fire this month, and April continues with some great opportunities for live Tolkien discussion. On April 21 & 22 we'll examine Female Characters and Tolkien's Middle-earth [details here] and for the 28 & 29 it's back to The Fellowship of the Ring to talk about chapter VI, The Old Forest. And if you miss the action you can find our logs at The Hall of Fire homepage!

There's a cool interview with the ever-articulate Cate Blanchett [Galadriel] in the New Zealand Herald. Mainly she talks about her latest movie 'The Gift' but she's able to talk a little about the Rings too - and her feelings about the inevitable long-haired Galadriel dolls of the future. I hear ya, Cate. [More]

We got a spy report about the Howard Shore soundtrack [More]

This weekend we continue our Fellowship of the Rings chapter by chapter discussion in The Hall of Fire with chatper five, A Conspiracy Unmasked. More details here.

The Spiderwebart Gallery is selling 4 new Hildebrandt posters. Click on over to our SHOP section to get a preview of the goodies. [More]

The nightmare journey through the Valley of Merchandising begins...

Thanks to Matt, we get a look at some of the unintentionally funniest LOTR merchandising we've seen so far. It's over at Elostirion and it could be joke, but on the other hand, it could be true. Look and marvel. (More)
!!!Visual Irritant Alert!!!

The debate between purists and revisionists is nothing new - it existed before the LOTR film project was announced. As far as the books go, there's always been a Tolkien Society devoted to respectful scholarship and celebration of the works of Tolkien. There's also an Alternative Tolkien Society, for those who can't get enough of a good thing...they've gone on to create MORE history for Middle-earth. They've relaunched their website, which you can see here

New Zealand Pines for the Stars

Media entertainment site [DigitalMediaFX.com] reports that eager NZ'ers hope to draw Hollywood to them with the release of Tolkien's LotR. [More]

We know the answer

This could only be the work of a rabid LOTR fan...

The usually on-the-spot entertainment news show Access Hollywood made a huge faut pas just this past minute by showing the wrong website while talking about LOTR.

The show mentioned the massive number of hits by the official site (lordoftherings.net), but showed clips from an un-official fan made site lordoftherings.com. Arg...never trust TV, stick with us and the web :)

The official Ian McKellen (Gandalf) website has updated the 'Grey Books' section of the site. Check out all the latest Q&A's. [More]

Ok, so these aren't creepy facts about the LOTR cast and crew, more like coincidences. But after all, Friday the 13th isn't supposed to be creepy...just kinda semi-creepy. [More]

Fox Special on LOTR to air in November!

Harry at AICN had an interesting adventure with a time machine that means he was able to write a detailed review of the looooong special on LOTR that Fox will be airing in November. And they're planning to make two like that, apparently. If Harry travelled to the same future as the rest of us, it looks like we'll get a great preview of the films well before the movies come out. [More]

Cast Watch: McKellen and Wood plus others in NZ

TheOneRing.net can confirm rumors that Ian McKellen (Gandalf) and Elijah Wood (Frodo) plus other cast members are back in New Zealand doing some ADR (Automatic Dialog Replacement) work and some pick up photography for various scenes throughout the films. Contrary to other rumors however, they will most likely NOT be actually shooting any new footage. [More]

The latest newsletter is away! Do you want to receive our weekly newsletter? Packed with tons of info to keep you up to date on the latest? Plus filled with exclusives from time to time! Join the crowd of more than 3600+ mailing list Ringers! Sign up now! [More]

Word from Barbarshop: I don't know if anyone's reported this yet but our very own Brad Dourif (Wormtongue) is playing (voice) the new evil character on the PC/Mac game Myst III coming out on May, 8 2001. Booooo, hiss!

From 'Massey News' comes a report that Peter Jackson and longtime companion Frances Walsh are to get honourary PhD's in Literature. Congrats! 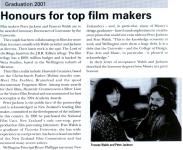 Thanks to Bluebottle for the tip!

As of today swedish fans can enter a competition where first prize is a trip to Cannes and two tickets to the LOTR party. The party is taking place at a castle near Cannes where props from the films have been used to create a "middle-earth like" setting. Peter Jackson and some (I think all -Xo) of the actors are going to be present. The contest, wich ends april 27,is held by SF (Svensk Filmindustri) at the official swedish LOTR site.

See you in the south of France :)

What are you Tolkien about?!

An extreemly hilarious spoof on our LOTR Trailer has popped up at ifilm.com, click on over to see 'Lord of the Rims'... [More]

Viggo Mortensen and his Horse

Viggo Mortensen (Aragorn) loved the horse he worked with on LOTR so much that he bought it and shipped it back to the States with him. Get the whole story over at Glaurung's Hoard. [More]

Cate Blanchett (Galadriel) speaks about her many roles, both past, present and future, in this article from the Sydney Morning Herald. Thanks to Demosthenes for sharing the link! [More]

Ringer Spy C-Ris sends along some great high rez, high quality images from LOTR. Nothing that we haven't seen before, but you get a good chance to look for some nifty details. SPOILERS [More]

Liv Tyler (Arwen) is scheduled to appear on NBC's "Today" on Monday, April 23rd. She will be promoting her new movie, "One Night at McCool's," but you never know if some LOTR tidbits will pop up.

There is a recent short mention in an article in "Variety" April 2-8 issue on pg. 50. Written by Dana Harris and Cathy Dunkley, the article discusses who will be at Cannes and what films and previews will be shown. LOTR is mentioned as one of the objects the foreign distributors and paparazzi will be "licking their chops" over. Several of the stars were mentioned as scheduled to attend the film festival in the sunny south of France. One photo of the hobbits, possibly the scene where they are attacked by Black Riders. You may have received other mail, but I did not notice an earlier mention.

iVillage.com has listed LOTR as the 6th best book of all time. We can all sleep better now.

This weekend I got the chance to ask John Howe some questions regarding, well, everything actually on behalf of TORN-community site LordoftheRings.nl. For your reading pleasure I have now put the English version of the interview online so feel free to check it out! [More]

Next month the feisty Anwyn will return! Join us as we explore the WORDS and WORLD of Tolkien.

Cast Watch: Liv on 'The Priory'

Ringer Spy Dave sends in word that Liv Tyler (Arwen) will be appearing on 'The Priory' on channel 4 in the UK next tuesday. 'The Priory' is a friendly/funny interview sort of show. Check it out and see if she'll chat LOTR!

Howard Shore, the composer for the LOTR Trilogy, is hard at work on other projects as well. He has recently been tied to the Brando/DeNiro/Norton crime drama 'The Score' and the new Animation/Comedy 'The Colored Star'.

Cate Blanchett (Galadriel) is set to join Kevin Spacey in Nova Scotia this june for the film 'The Shipping News'. Check out more about the film here. [More]