We have survived! Now it's back to business...

The Brad Dourif (Wormtongue) film 'Bride of Chucky' can be seen on TMN today. 9 PM EST is the first showing.

The Ian Holm (Bilbo)masterpiece 'The Sweet Hereafter' can aslo be seen on TMN at 8 PM EST.

The Elijah Wood (Frodo) film 'And the Bumblebee Flies Away' can aslo be seen at 8 PM on Starz!

There's more about life as a hobbit extra in Spy Reports

This will probably be the last post until the new year (but you never know..). Just want to wish all of you a very safe and happy new year. I've always wanted to live in the year 2000...here it comes :)

From the German language Mag 'Cinema' 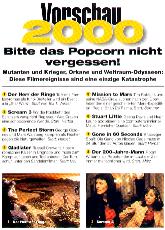 Berendir from Gaming Havens sends me this rather cool news item regarding your mic and the MUD Online Roleplaying Games. [More]

A Plethora of NEW Fan Art

Check out the fan art gallery for 20 new pieces of fan art! Included in this update are some VERY talented new artists and 5 more works from Tookish's 4th Graders! (with about 25 more to come in the next few weeks) [gallery]

A tidbit of news in Spy Reports that confirms that things are getting underway on the Hobbiton set near Matamata.

Ringer Spy Julius from our Dutch version of TheOneRing.net™ Midden Aarde sends in this news from NZONFILM. It's a great interview with the LOTR Stunt Team! It is from October but you can still find out what stunts they have planned and what they've done so far and more!

Check it out in The Spy Reports

I've spent the last three weeks wandering around the South Island in a lot of places where filming is taking place, and quite a few where it isn't. Did I spot any film stars? Well, not to my knowledge. But everywhere I hiked, climbed, swam and flew, the great LOTR project was leaving its mark on people and places.
When I wasn't chatting to people about the film, I was taking photos of the landscapes that will, as near as I can judge, be Middle-earth in the eyes of the world.
Over the next few weeks I'll post a series of pictures and reports on the places I saw and the things I found.

Super Ringer Spy Resevoir Dog sends in this news item regarding John Rhys-Davies (Gimli the Dwarf). Australian Ringers can catch him in 'Catherine the Great', check your local listings.

The latest issue of Cinescape Magazine has a few little goodies for us to chew on.

Firstly there is a small blurb regarding the production. They called LOTR 'The closest thing you'll get to a sure thing since The Phantom Menace. The casting (and CGI shrinking) of the main characters is risky, but could ultimately prove to be a great idea. With a nice little pic of the lovely Liv Tyler

Secondly is a bite in their 'Movies.com' section regarding the 'X-Men' films, The Official Ian McKellen Website is mentioned. Since the folks there are cool dudes, I thought I'd mention it :)

Last there is a great feature on the X-men project with a great pic of Ian McKellen.

Super Ringer Spy Sam sends in 4 more secret set pics from the quarry. Check them out in The Spy Reports

Check out all the glorious toys you can pickup at Ebay. Did I miss something on another auction site? Send it to me. [More]

UK Ringers can catch Sean Bean (Boromir) tonight at 9 PM. He'll be playing himself in 'The Vicar of Dibley' on BB1.

Thanks to Nona for the tip!

A note to you folks to liked to frequent the gamersx.com msg boards, I see you've been having problems with your board. I've set another one up for you on the same site. Located here. You guys can use it at your own conenience, it has nothing to do with TheOneRing.net, but if you want to be an OP on it, just send me an email and I'll set you guys up. cheers :)

Ringer Fan Jeff sent in this letter he received from Peter Jackson and the folks at Wingnut Films concerning some music he sent in to them, with portions snipped by me. The music is described by Jeff as 'lyrics from the point of view of Aragorn as he lays down to voluntarily give up his life. He acknowledges the tremendous cost to Arwen but reminds her that their deaths are inevitable and that the triumph of the west over Sauron made these things come to pass':

Check out what Jeff sent into Wingnut here.

Thank you for expressing interest in our project, "The Lord of the Rings".

...We commenced filming on the 11th October and currently Peter is focusing his attention on shooting the first film and perfecting the scripts for the second and third. At this stage he will not be concentrating on the music for the trilogy until well into the New Year.

...Please be assured that your information is being kept on file in our comprehensive library of prospective musicians, composers, lyricists, singers etc

...Thank you again for your interest, support and patience.

It seems that the 2nd and 3rd scripts have yet to be perfected! Sounds good to me:)

Ringer Spy David tiped me onto this play that is now showing in Australia.

Check out the website, if any of you Aussie ringers want to review the play for me, drop me a line :)

Just thought you and the thousand of other Tolkien fans might be interested. The British Foreign Office have produced a website (scheduled to be on-line from the millennium) called Planet-Britain 2000. The idea is to communicate Britain and its culture to the rest of the world. Part of the site (and its gonna be huge) overviews our links with other countries (including Canada Xo) and in the Australasia section of course, there is New Zealand.

This is what they'll have concerning LOTR:

"The Lord of the Rings

New Zealand director Peter Jackson is currently filming this epic trilogy in the South Island. The movies, which will be filmed back to back, have an estimated budget of $360m and are to be released in the summer of 2001. It is the first time anyone has atempted to bring Tolkien's internationally adored works together as a live-action film, but it is a project that has been close to Jackson's heart for the best part of his life. Now, with a cast including Sir Ian McKellan, Cate Blanchett and Christopher Lee, a crew of hundreds and some of the most amazing scenery on the planet - we can expect to see Frodo and Bilbo Baggins come to life thanks to the glory and splendour of New Zealand."

The website will be used by governments, universities and people all over the world and though I say it myself, there's something for everyone. The address will be www.planet-britain.org.

Australian fans of Christopher Lee can catch him in his latest role in 'Sleepy Hollow' which opens today.

It was the dress that made British actor Elizabeth Hurley famous when she wore it to a film premiere.

Now the Museum of New Zealand, Te Papa, wants to bring the notorious safety pin dress to New Zealand – although it’s unlikely Elizabeth Hurley will be inside it.

It will be part of an exhibition of designs by murdered fashion designer Gianni Versace.

Te Papa is negotiating with the Fondazione Antonio Ratti to exhibit a selection of Versace’s designs, which cover theatre, opera and ballet, as well as haute couture and pret-a-porter clothing.

The Fondazione created the Versace exhibition at Miami’s Museum of Contemporary Art. It is one of several planned events recently outlined by Te Papa chief executive Dame Cheryll Sotheran to Wellington City Council.

The museum is also negotiating with Wellington film maker Peter Jackson’s production company Wingnut Films to develop an exhibition based on his Lord Of The Rings trilogy.

The exhibition would open in stages to coincide with the release of each movie.

Information presented to the council said the magic and mystery of Tolkien’s story would be recreated at Te Papa as a three-dimensional reality.

The exhibition would also explore the new technologies being used to create the films, and the cultural and historical background of Tolkien’s imagined world.

An exhibition looking at the 1977 punk revolution is planned, as well as a selection of works by the great impressionist artist Claude Monet.

Thanks to Hobbs3 for the tip!