The latest Cate Blanchett film 'The Talented Mr. Ripley' will open tomorrow. (any rumors that I said it opens today, December 24th, are greatly taken out of context hehehe - too much eggnog!) Merry Christmas!

You ask, we Answer!

Hall of Fire Closed for the Holidays, Set to Reopen Saturday, January 9, 2000

Well, we pride ourselves in being a site, "...forged by and for FANS," and as a die-hard Tolkien nut myself I can attest to this truth. Due to response from other Tolkien and TheOneRing.net fans, we have decided to postpone the next Hall of Fire meeting. This will give you plenty of time to research some good references for our chat, so hit those books elf-friends! Much joy and good cheer to you and yours.

In this weeks 'Womans Day' there are pics of Cate Blanchett from 'The Talented Mr Ripley' premier, as well as a blurb about Liv Tyler.

This Sunday in Australia ringers can catch Elijah Wood (Frodo) swimming with dolphins in
'Flipper'. Check your local listings.

Thanks to Dave for the tip!

The most recent issue of Interview (January 2000) has Cate Blanchett on the cover, inside they mention her role in LOTR, although she seems to avoid talking about it.

I'll be going by to pick that up tomorrow, thanks to Symbelmine for the tip!

The December/January issue of French Primere mag has a nice tid bit on LOTR. The following is translated by yours truly :) so bear with me: 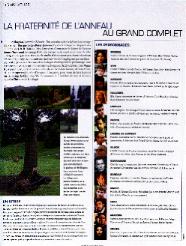 Blurb with Images, Including the famous 'tree'

The Fellowship of The Ring: The Complete Cast

Wellington, NZ. One week after the begginging of production the first film that will realise Peter Jackson's dream of JRR Tolkien's Lord of the Rings, New Line (erm, more like me - Xo) announced that Stuart Townsend (Shooting Fish) would be leaving the production. Townsend was signed on to play Aragorn, a warrior. New Line gave no reason for the departure, but rumors on 'Daily Variety' say it was due to creative differences between the actor and Peter Jackson. At the time of press, it seems that Viggo Mortensen will fill the role. The complete cast list was then sent out in a Press Release on October 7th. 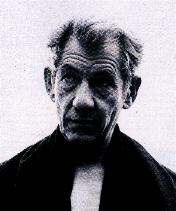 As part 2 of this 'French Primere' feature, We have a page news bit on Ian Mckellen, it features Ian's words written in his 'Grey Books' in french, a small paragraph of introduction is below, here again yours truly will translate :)

McKellen.com (mckellen.com) features and exclusive interview with the actor who will play Gandalf in 'The Lord of the Rings'

The latest Ethan Hawke film 'Snow Falling on Cedars' is out today, I've seen a few clips on TV and it seems to be a rather interesting film.

For UK ringers Ethan Hawke can be seen tonight @ 12:35 on ITV/UTV starring in White Fang. Just to let those who want to see our boy Faramir in action. Merry Xmas Thanks Strider!

And it's got a great score too!

The good folks at Cinescape have gotten themselves a review of 'The Ninth Gate' from Vienna, Europe.

What's the connection? Well the answer is composer Wojciech Kilar. Kilar has stated himself that he is close to signing with PJ and the crew to do LOTR.

You can hear some of his great work in 'Dracula', 'The Portrait of a Lady' and now in 'The Ninth Gate'.

Find out more about Kilar here.

More on that Liv Tyler Article..

Think there is more to see in that Liv Tyler/Arwen article? There is! Check out The Spy Reports for the entire article.

Ok, so I wasn't expecting LOTR blurbs in a ST mag, but here it is, straight from Barliman regular PowerLeca,

In Issue 126 of the Star Trek Communicator, there was a very short blip about the upcoming LOTR movie. It was at the VERY end of the Sensor Readings section. Here is the full whaddayacallit:

Thanks for the tip!

Turgon can't be stumped in the new Green Books update!

The most erudite and deliciously bookish Turgon has come forth from his Library to shower us with gifts. The gifts of KNOWLEDGE, mind you, and he's got plenty to share!

Read from his 12 great new articles in the Q&A section and you'll learn various things about Turin's speaking sword and the esoteric Second Prophecy of Mandos. But the joy of being STUMPED has eluded us still! Turgon takes on the meaning of "Moria, the Black Pit"-- Click here to see the new Stump the Staff.

He's also given us the "Best New Tolkien for Christmas" in his Bookshelf column, taking us close-up to the new edition of the Professor's "Letters from Father Christmas." This is very cool stuff.

And I offer for your pleasure a fun little item for the Holiday Season. Go Out on a Limb with me as I explain to Samwise's eldest daughter, "Yes, Elanor, there really is a Gandalf!"

WHAT?! Only 5 Shopping Days Left?

And you still haven't sent me anything for X-Mas? Ok well, here's hoping. But if you want to get that special someone a great LOTR item try this weeks Ebay items over at our shop!

Jenny passed along some infor regarding the possible fate of Eomer. She emailed Mike Deluca himself and asked about it. This is what the long winded Producer had to say:

thanks for the kind words...and Eomer is in the movie

There we have it, though I'll be waiting for more credible confirmation, but rest ye fears! It looks like he's still in!

Ringer Spy Clinny has done some great work and cleaned up those storyboard images from NZtv a long while back, check it out in The Spy Reports.

This is a little blurb sent in by 'Aiglos' anyone know where this Rivendell is?

In the United States, communities of Y2K survivalists dot the landscape. In Virginia's Blue Ridge mountains, the Internet is drawing people to a self-sustaining community called Rivendell, named after a refuge and learning center in J.R.R. Tolkien's ''Lord of the Rings.''

Thanks to Aiglos for the tip!

The critically acclaimed Ian Mckellen film 'Gods and Monsters' will be on Showtime tonight at 8 pm EST.

Gaming Havens has posted a review of The Two Towers MUD. Check out Berendir's experience with this MUD. Check out the new fan art this week. Corvar has also made it possible to quickly link to your gallery (if you have submitted fan art): type in http://fan.theonering.net/art/gallery/YOURNAME

A Ringer sent in the latest addition to the mulitmedia section. Its an interactive Middle Earth map made for Windows 98. Download it now in our multimedia section.

Thats about it! Look for a Green Books update very soon!

AICN has what they claim to be an Elven test shot for makeup, hopefully my friends at WETA can give me a nod as to wether it is real or not. Here's the image: 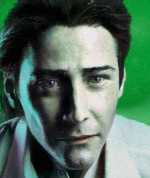 Into serious Tolkien discussion and debate? Check this out from Tookish:

Hullo Ringer fans! Gandalf tells me they've conjured up another great topic for discussion at The Hall of Fire today. Come along, join the throng, and see what it's all about.

Topic: Could there have been an easier way to get the Ring to the Cracks of Doom?

Why send a little hobbit on foot to destroy the Ring? Why not send Gwaihir the Windlord, or something faster and easier? If you were at the Council of Elrond, what would you have recommended?

Not to sure about the time? Check out a time-zone map to get your bearings!

The Dog? You are Named after the Dog?!

Ok so Sallah (John Rhys Davies) doesn't say that in the first Indiana Jones adventure 'Raiders of the Lost Ark' it is still my favorite film quote, and my dog's real name actually. But you can catch JRD in this all time classic adventure thrill ride. And get a load of that voice, he IS Gimli!

Watch 'Raiders' on the Sci-Fi Channel at 9 pm EST.