When it comes to medieval arms and armour, few people know as much as Joe Piela of the Lonely Mountain Forge. A longtime Tolkien fan, he agreed to look at all the images we had of arms and armour in the film production. The result is this great article! (more)

Yesterday we reported the sad news of Rayner Unwin's death. A correspondent wrote in with a few lines which summed up the importance Rayner had to Tolkien and his fans - who would never have existed without Rayner's intervention.

"Rayner Unwin was the person who first reviewed The Hobbit (when aged 10), and on his advice his father Sir Stanley published it. He was paid one shilling for the review.

Rayner Unwin was also the person responsible for getting the Lord of the Rings published. The necessary permission from his father came in a cable:

And the rest is history"

Another eyewitness at Vt. Vic.

The latest set at Mt. Vic is certainly accessible. That makes a change! The reports have been coming in (more)

An eye-witness at the new Mt. Vic set.

Here are 4 pic's taken last Saturday on my way down to Wellington. [More]

Garth over at Dark Horizons has this report today:

"New Zealand paper The Dominion reports that a sneak behind the scenes preview of the animation of "Lord of the Rings" is happening in Wellington next weekend. The city is one of 30 worldwide to host a 3D graphic roadshow on December 3rd, though its the lucky one to have a guest speaker from Peter Jackson's graphics company Weta Digital who "will talk about some of the steps involved in making computer animation for the LOTR and share a glimpse of what it is like behind the scenes". To get inside and hopefully see a very brief glimpse at some LOTR conceptual footage, you can register and find out more info here."

Another week, another holiday gift idea from our friends at Rapgear and Greek101!

Check out the official TheOneRing.netÖ Embroidered logo hat and other TORn products in our shop specials section. [more]

You might remember that a few months ago we offered TORN readers the opportunity to become involved in a documentary about Tolkien culture. The documentary's progressed well since then and promises to be a very interesting and different look at the world inspired by Tolkien(more)

He came, he read, he left. Welsh actor John Rhys-Davies (Gimli) left a packed audience at the Palmerston North City Library spellbound on Thursday lunchtime as he kicked off a marathon reading of J R R Tolkien's Lord of the Rings. [More]

Wingate: A Moonlit Brawl with Torches

We asked for more detail about the latest at the Wingate set and it all seems rather exciting. Lights, shouting, a big moon....(more)

I'll See You in Line...worldwide

Ringer Spy Josephs sends in news regarding the LOTR primere in South Africa.

Don't know if this info is of any interest to you, but I've been following your coverage of the release dates for LOTR.

I live in South Africa and I decided to check at a cinema to see when we'd be getting LOTR. The manager went to check his files or something (obviously of expected release dates) and told me that she thinks it's going to be released on the same day as all the other countries (I said something about December next year) and she nodded and said that that sounded right. She also told me that she had seen the Interent trailer.

Well, South Africa dosn't get films MUCH later than other countries (about a 2-3 week delay), but it looks like we'll get the first LOTR film right when everyone else gets it!

Xoanon Note: Claire Raskind called the TORN offices this afternoon to re state that the release dates for LOTR will be, as already reported in the press, a world wide simultaneous December 2001 release.

Ringer Spy Dunkirk sends in the latest from 'Pipes & Tobaccos Magazine', which this month has its cover and main article deicated to JRRT! [More]

Check out Shop.TheOneRing.net for the latest Lord of the Rings related poster to hit the market. [more]

The Dialect Coaches speak against misinformation.

There's been so much speculation and to be honest pre-emptive whinging about how the characters in the 'Rings' are going to sound that the Dialect Coaches on the film production felt moved to defend themselves against what they felt was misinformation propogated on the Net. They wrote to Beren to set the record straight on how the Hobbits et al are going to speak, and you can see their letter over at The Company of the Ring

My other thread lately is 'What's that they're building at Wingate?'

Without more detail, it's hard to tell...guesses so far include the Houses of Healing, and two votes for the court in Minas Tirith with the remains of the White Tree. From Stevanos:

"My guess for the new set is that it will be the garden outside the White Tower of Ecthelion atop Minas Tirith. The wall is part of the Tower, and the hole is where the (Dead) White Tree will go. It will also make a symbolic backdrop for the romance of Faramir and Eowyn - and especially when the new White Tree is planted."

All the details we have so far are here

And so do the people that watch them. I started a 'Polartec' thread a few days ago, and super spy Glaurung took it and ran with it a lot further...(more)

The latest newsletter is away! Do you want to receive our weekly newsletter? Packed with tons of info to keep you up to date on the latest? Plus filled with exclusives from time to time? Join the crowd of about 3000 mailing list Ringers! Sign up now! [More]

I'll See You in Line...Mate

Ive got some info about the official release date for FOTR in NSW, Australia. I went to my 2 biggest local cinemas and they said that the date is December 19th, 2001. So it looks as though a few of the major countries are getting it on the same day.

Herald to the Rings

The NZ Herald had this massive map of NZ made to look like Middle-earth in it's paper recently, some great pics from the production here! [More]
!!!Spoilers!!!

John Rhys-Davies (Gimli) recently spent some free time reading LOTR to some school children in New Zealand. Imagine hearing his deep Welsh voice telling you about Sauron and the ring?! I'll bet he really enjoyed reading scenes with a certain short member of the Fellowship involved... 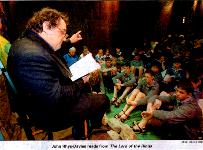 Ringer Spy Mushroom from the Philippines tells us about a local Tolkien inspired bar.

I recently heard about this bar in Manila called Hobbit House. [More]

I'll See You in Line...I think

Word from a Danish Reporter from New Zealand about release dates in Scandinavia again.

I just read Ringer Spy Krameon's notes on the release dates of The Fellowship of the Ring for the UK and Scandinavia.

Unfortunately, that information is not accurate if you are to believe Claire Raskind, publicist of The Lord of the Rings here in Wellington, New Zealand.

I'm a Danish foreign reporter, freelancing for the Danish dailies Aktuelt and Berlingske Tidende and I'm currently here in Wellington. I just talked to Claire Raskind and she assured me, the first film will not premiere in the UK and Scandinavia "till January or maybe later (in 2002)".

"Song of the Hunted."

Well, a slow news day coincides with an email drawing our attention to another fantasy film being shot in NZ - seems there's more than one sorcerous epic haunting our backwoods. More modest than the Rings, in fact it's closer to the scale of the Ancanar project in California, but after checking out their website I've got hopes for it.

This looks like dedicated, honest filmmaking based on a story that would interest a lot of us fantasy buffs.

If you want to check out more about this little indie film, their stylish website tells you more. Song of the Hunted

(Some of the backdrops explain to me why people kept phoning me to say the 'Rings' was being shot within half an hour of my place. I wish!)

Guesses on the latest Wingate set?

What's it to be, folks? We know it was Isengard a few months ago, when the infamous Wizard Kebab photo was taken. Many walls and arches later, it seems to have become Minas Tirith, as you see here - Taita and Wingate have been confused - I think they're the same place. Now what is it? Here's the description. TORNie fan Kevin was the first to speculate:

"I bet the new set at Wingate is the Healer's Quarters garden at Minis Tirith. I think the hole in the ground is a well of some kind in a garden with gravel paths."

Ah, CRAMģ the perfect Thanksgiving Feast to serve a Tolkien fan. Not only can Green Books teach you the secret recipe for those famous rib-sticking dwarf rations, but we can teach you Elvish too! Check it out:

ĘWant to see Sauron as Tolkien envisioned him? The Professor had wonderful drawing talent, as shown in the new edition of J.R.R. Tolkien: Artist and Illustrator. Turgon has a copy of this most perfect of Christmas presents over on his Bookshelf.

ĘThis is your chance to learn Elvish grammar! We are very proud to bring you this exclusive feature: Cent o Hedhellem ōAn Examination of the Elvish Tonguesö over in Moon Letters! Amaze your family at the dinner table when you let loose with a silvery sentence of Quenya.

ĘSolve some mysteries with our new Questions & Answers:

ŁWhy an additional Morgul-path?
ŁWhy did the Nazg¹l have such a hard time finding the Shire?
ŁHow was Gandalf brought back from bodily destruction?
ŁWho was the real father of Bullroarer Took?

ĘHave a creative writing piece, song, or poem inspired by Tolkien? Send it to us at greenbooks@theonering.net

For all our international readers who donÆt really celebrate Thanksgiving Day, well, what can I say? You really donÆt know what youÆre missing. The food, the family fighting, the upset stomach. ItÆs the most hellacious American holiday of them all.

TheOneRing.netÖ Dutch affiliate LordoftheRings.nl is featured in the Dutch magazine Hp/De Tijd. It is available on newstands this week, so make sure you grab your copy today! They interviewed Ringer staff member Leo, his fellow LordoftheRings.nl buddy Julius, and Rene van Rossenberg, who is webmaster of Tolkienwinkel.nl. Leo assures me they will have an english translation online soon at lordoftherings.nl! [more]

They're turning Wingate into.....something else! (more) Now what?

The great folks from Glass Hammer have sent us an update regarding the latest recording: