Ringer Spy Vans sends in news regarding who, what, when and where they'll be scoring The Lord Of The Rings!! [More]

He could have been a footballer. He was once a welder. But, instead, Sean Bean became one of Britain's most in-demand actors. Rob Driscoll finds out why. [More]

Thanks to Winona at 'The Compleat Seam Bean' for the tip!

Aussie Ringer Spy Matt dishes out the goods and sends us a great interview with David Wenham (Faramir)!
Click here for an MP3 of the interview!

An Upper Hutt local spotted the famous 'Jamb' signs and found a film crew not far from the old Rivendell set. (more)

Onfilm's November edition includes an interview with Jon Labrie, chief technical officer of Weta Digital, and he talks about the "unique IT challenges of the largest fantasy project ever commissioned.

Liv, is that you?

Ringer Spy Randy sends in this odd looking add, the real question is, IS this really our Liv Tyler (Arwen)?

Unless I'm mistaken, there's a striking image of Liv Tyler (in blue contacts? I don't know what color her eyes are) in a Bvlgari ad on the back page of today's New York Times Magazine.

I'm attaching an image of the ad; am I imagining things, or is this our gal Arwen?

This month we'll heat up The Hall of Fire debating Tolkien and religion in a two-part series. November 11 & 12 features The Ancient Faiths and on the 25/26 we'll tackle today's relgions. Forget that cold weather and come where the fire is burning!

Peter Jackson's acclaimed spoof documentary is out on DVD and thanks to James we can tell you where to get it. (more)

Check out this weeks catch watch to see your favorite LOTR actor on the small screen. [More]

Ringer spy JFeTT writes in to inform us that our Liv Tyler (Arwen) has garnered the very unpolitically correct title of 'Babe of the Day' on the IGN ForMen website. I think Liv can now retire knowing she has reached the pinnacle of success...yay. [More]

Found this in the Doors section of the British Sunday Times.

"With 58 weeks until the release of the first Lord of the Rings movie, it already has hundreds of devoted websites. Annoyingly, the official site takes over your browser, demanding that you download the movie's trailer before entering. Which would be fine, were the trailer not such a large file. The site is beautifully designed, although the pictures of the Shire set rather worryingly resemble the Teletubbies' house. Sadly, there is little information or insight here - keep your fingers crossed this is not how the film will be."

Prick up your ears! News from NZ Onfilm

Among the things that Onfilm magazine found out for November is one that made me sit up a little. A few months ago Peter Jackson bought the National Film Unit to handle post-production. It's just made a 'classified' major investment in sound equipment, and is planning to expand the digital video domain as well. So they're taking good care of the sound on these movies too.

Another snippet from the same mag gave a quote out of the Variety interview which I don't remember reading there: The reporter asked him why he continued to work only in NZ and Jackson replied, "Why leave the Shire to go and live in Mordor?"

Lastly there's a few bits of DVD news: Old buddy and co-director Costa Botes who made the mockumentary 'Forgotten Silver' with Jackson is preparing a special US edition of it that will include a 'making-of' segment and an interview with PJ. Meanwhile several distributors want to release 'Forgotten Silver' on DVD format, and PJ's first feature 'Bad Taste' will soon be re-released as a DVD and shown on the Sci-Fi Channel in the US. 'Bad Taste' has earned over a million dollars (NZ) and returned 350% on its original budget.

News from the Frankfurt Book Fair.

Cirdan over at Herr der Ringe, the German LOTR site was in a good position to find out this bit of news! Apparently Harper Collins are publishing two books next year about the making of the LOTR movies. Their deal with New Line will allow them exclusive access to stills and photos from the production of the movie, and allow them to talk to the actors involved. For starters, they're planning a 'movie companion' which will be a large format full-colour book like an encyclopaedia of places, characters and scenes from the films. Drool. There'll also be two books of Howe's and Lee's artwork, with a foreword by Peter Jackson for the Howe book.

Exclusive Limited-Edition Lord of the Rings Leather Journal. New Line created these gorgeous leather-bound journals as gifts for various people associated with the film, and we have a very small quantity available for sale in our shop. [More]

The cool boys and girls at SFX Magazine have a new 'LOTR Rumor Round Up' in the December 2000 issue. Click to read:

Many people have written in asking me about the LOTR trailer coming out in theatres all over North America this December. To answer you truthfully, we've tried checking in on the details but have come up with nothing, this is what we do know. [More]

Orcs must wait for pics

Extras playing orcs in The Lord Of The Rings film trilogy get their photograph taken in makeup and costume as a souvenir, but with one catch. They don't get the photos for two years. [More]

While surfing through channels today, Ringer Staff Member Nob ran across an interesting interview. Tolkien expert Dr. Tom Howard was on the EWTN Network talking about "Catholic Authors" and Tolkien was discussed extensively. Nob was able to find a real audio link for your listening pleasure. (Jump to the 48 minute mark to get to the discussion on Tolkien. You will need RealAudio to listen to this broadcast.). [Listen Now]

Bored? Nothing to do? Have some time to kill? Why not visit Barliman's and the Tolkien Fun Section.

Here are the questions for today:
1) "Name the great leader dubbed "The Lame""
2) "unpleemk" (Scrambled Tolkien person, place or thing)
3) "He looks as if he were spoiling for a race, and not newly come from a long journey." (Who said this?)

Ever been over to our Features section? That's where you can read Tehanu's and Xoanon's very individual views on Tolkien, fantasy and film-making.

The latest Tehanu's Note is up, The Power of Myth Not that we're trying to stop you getting work done or anything.

Check out this great site 'Good Taste: the Making of PJ's Bad Taste' for some great behind the scenes footage from one of PJ's other great films.

www.goodtaste.co.nz has copies of a documentary on the making of "Bad Taste", plus early experimental films available for sale...check it out 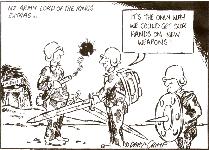 The Lord of the Rings movie trilogy is estimated to have injected at least $15 million into the Queenstown area alone. [More]

Some very impressive production stills from ANCANAR, the indie film project based in southern California. Seems like all things are going well there :) Click on the images to go to the official site.

Thanks to Tom A for the tip!

That's Right, Tolkien artist beyond compare John Howe will step into the arena with me to chat LOTR!!!

John Howe's work can be seen far and wide across the world of Tolkien, just take a look at our Rolozo Tolkien image gallery for proof, Howe is a well respected artist.

John has also spent many a month in New Zealand working as conceptual artist for the LOTR films!!!

So keep an eye out right here for an EXCLUSIVE INTERVIEW with John!!

Got a question you want me to ask? Drop me a line!

Sean Bean (Boromir) is apparently auctioning off a guided tour of Pacifica....

Sean Bean (Boromir) made a brief appearence on ITV's "Celebraty Auction" programme, which auctions celebrity artifacts for charity. Bean offered a holiday where you tour the pacific islands with him! Imagine all the LOTR questions you could ask him! [More]

Sean did not auction off a personally guided tour of a South Pacific island.

He was a celebrity presenter at the televised celebrity charity auction. He INTRODUCED and PRESENTED one of the lots to be auctioned off - which was a trip to the Maldives. That was the extent of his involvement - he had nothing to do with the actual holiday....

David Farquhar from Reiner Knizia's gaming camp dishes the news on the US release date for his latest LOTR game! [More]

As you may or may not know Assassin Films is working on a LOTR documentry about the fans (a la 'Trekkies'). The cool folks from 'Glass Hammer' recently caught up with the filmmakers:

I am a very organized guy -- for a musician that is. I like details. Before I take a trip, I have my directions, map, phone numbers, and at least one back up plan... [More]

More from E! Regarding Who's in Kiwi land and who's done filming:

While Elijah Wood (Frodo) and Sean Astin (Sam) keep up their double act...

The voice of Gollum (and possibly the actor playing Smeagol), Andy Serkis, is also back at work in Wellington.

Who's Not: After a whirlwind three days' work in Wellington, Hugo Weaving wrapped his scenes as Elf boss Elrond...

The ubiquitous Liv Tyler (Arwen) returns from break in December to wrap her scenes.

Just like clockwork, the E! Online site has updated it's 'Force of Hobbit' page.

Check it out this month for some great info on the filming at Twizel, and a great pic of John Rhys-Davies as Gimli! [More]

This one page article appeared in the new December 2000 issue of Total Film magazine here in the UK. It purports to show exclusive pictures although I feel sure that I've seen the bottom one before. The large picture at the top I presume to be an encounter with the ringwraiths near the Buckleberry Ferry??

Click here here and here (this last one is very cool!) to view the pics!

Good afternoon fellows. I just recently recieived the new Frequency DVD put out by Newline. On the DVD are some LOTR treats, like the browser, but also a screen saver and some walpaper. Its not mouch, but at least its something...:)

I'm off to the video store as you read this...

Hello PJ fans! In honor of the great man's birthday, we are announcing a special contest!

As everyone knows, imitation is the greatest form of flattery, so, sit in your director's chair, and see how well you can imitate PJ! We are looking for horror script written in PJ's crazy, off color style. Ever wanted to write a screenplay? Have you written one already? {Send it in} and you can win one of these fabulous prizes!

1st prize - A large signed poster by Peter Jackson himself, from the movie Brain Dead!

2nd prize - A smaller signed poster by Peter Jackson, from the movie Meet the Feebles!

Nobody tells a story quite like Madame B. Read about it as she makes her way over to the Wingate set (more)