You can either enjoy the Tolkien Items or go and vote for Lego Darth Maul! (For my good buddy TBA at Brain-Damage.net) [More]

Get the chance to watch your favorite cast members on the silver screen. [More]

'The Listener' turns in a report on the 'Rings'

And I'd give it a ten out of ten. At last, serious journalism. 'The Listener' is one of the main media and culture magazines in NZ; it goes way beyond its function as a TV and radio guide and observes NZ culture with a sharp intelligence. In this issue it's recognised that LOTR is big news in this culture. (more)

A steel mist scuds in over the hills, and then parts to reveal dozens of riders and a standard-bearer. They are Gondorians. Wearing armour and helmets, they await the call to ride through the snow tussock and back into the mist. [More]
!!!Spoilers!!!

Are you guys interested in some pics of the recent Wingate set? They're building what looks like a small village! [More]

Hullo Hall of Fire fans, it’s time to update you on some changes with The Hall of Fire. Thanks to your great suggestions we’ve put our thinking caps on and have come up with a few new things, including a new time for our Saturday chat. But first… our next topic!

Fate vs Free Will in Middle-earth

Our talk will be at 7:00 EST, a new time. Please note this change so you don’t miss our talk. A special thanks to Melian for the topic suggestion. 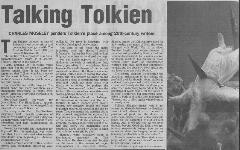 Regular correspondent Tiggy sent us the URL to a very cute and cool site on The Hobbit. It seems to be a class project from an inspired teacher, but as well as that it's a great interactive resource for any of you out there who're teaching or studying The Hobbit in class.
(more)

The film Liv Tyler (Arwen) left New Zealand and headed to Dallas Texas for a short while to shoot, 'Dr. T and the Women' is out today in North America. Richard Gere also stars, you have been warned. [More]

You can read a review of the film on IMDB, movie site of the Gods. [More]

The latest newsletter is away! Do you want to receive our weekly newsletter? Packed with tons of info to keep you up to date on the latest? Plus filled with exclusives from time to time? Join the crowd of more than 2700+ mailing list Ringers! Sign up now! [More]

Want the music off the internet preview?

Hands up everyone who liked the wonderful music on the internet preview? The bit with the choir blasting away full bore? Right, we've established that it's Chris Field's 'Gothic Power' and that it's not available to buy or download anywhere.

BUT the music that inspired it IS readily available. It's Carl Orff's Carmina Burana, specifically the number 'O Fortuna.' I sent the last few people who asked for 'Gothic Power' to get Carmina Burana instead and they were delighted with it. It's here if you want to get it from Amazon. Crank up your speakers and go for it.

Tolkien, Author of the Century.

We talked about this new book over in the shop section a few days ago, but it's not yet available from Amazon in the US.
But you can get it right now at Amazon.co.uk

I'm glad Xtem sent us the original article that started that rumour:

"New Zealand extras working on the $550 million Lord of The Rings production are being exploited with substandard wages and conditions, says an international film consultant. Hollywood based actor, producer and film consultant Anna Wilding, who is visiting family in Christchurch, said New Zealanders hired to supply and ride horses in the epic were being treated like "slave labour"."

I notice there wasn't any evidence i.e. quotes from extras who hated it. We on the website used to get emails all the time from people who'd crawl naked over broken glass for a chance to be allowed to be involved as extras (as if we could help!) so horsemaster Steve Old is right when he says people would pay to have that experience.

Well, you head off to the big city, you come home with all these big-city notions, like 'never do anything for any other reason than money.' Thanks for your input, Ms. Wilding.

That set gets bigger every time we hear about it. (more)

One of my very favorite cast members, John Rhys-Davies (Gimli) has FINALY spoken about LOTR.

The Southland Times was given a rare interview with one of the lead characters from Peter Jackson's movie trilogy The Lord of the Rings. Queenstown reporter Meaghan Miller talks to English actor John Rhys-Davies about his role as Gimli.

Thanks to Cinescape for the tip!

Super Ringer Spy Xtem sends in the original report from some extras down in New Zealand who didn't exactly like their 15 minutes of fame. [More]

Gaming Havens has received some more insight into what can be expected in the world of Lord of the Rings games. [more]

TV1 News gets a look behind the scenes.

NZ's TV1 noticed the anniversary date for the LOTR project too, and they had a look behind the scenes. There's a 2 minute video of their news report here

I thought you might want to see some information from the UK computer arts mag '3D World' concerning The Lord of the Rings movie. [More]

Were they expecting a limo and evian water?

A Geraldine couple who worked as extras on the set of The Lord of the Rings say they had the time of the lives and certainly were not exploited. [More]

Thanks to Cristtos for the tip!!

I work in the promotional field and sent you some images from promotional materials for Lord of the Rings a few months back. Anyway, I don't know if you know this, but New Line is planning to release each film on DVD before the subsequent comes out theatrically, and the DVD will contain a preview for the next film. Now that I think of it it seems obvious, but this is the first I've heard of it, so thought I'd pass it along. Very exciting for us DVD heads!

So it seems we won't have to wait until all three films are out of theatres to watch them on DVD!!

Our newshound friends at Scoop have compiled their year of LOTR news here....and they don't carry the name 'Scoop' without good reason.

On this day one year ago, principal photography began in Wellington for the Lord of the Rings trilogy after months of mysterious preparation both visible and invisible. We’d spent almost a year already following news of the film as it was revealed. But no cameras had actually rolled, and we didn’t know where they were going to start.

We’d like to celebrate the story of the film as it’s appeared to us since that first day, including some of the most memorable images. So take some time and relive this exciting year. [more]

On this day a year ago, principal photography began in Wellington on the Lord of Rings film trilogy. What a ride it's been so far! We'll have more on this later.

Fraud of the Rings

John Cook has taken ink to paper again and wants you folks to help him out.

Hey, Xoanon, it's John Cook here, the cartoonist who draws the Fraud of the Rings cartoon parody of LOTR.

Just letting you know we're doing another comic strip parody of Lord of the Rings at the Sci-Fi Movie Cartoon Contest. This one features a cartoon depiction of Frodo asking Gandalf why he wears all grey. You, the reader get to write Gandalf's response! Check it out or submit your own punchlines for Gandalf here.

Huancry sent us a review of Tom Shippey's new book on JRRT, "Tolkien, Author of Century."

OK, it's not available yet through Amazon, though I believe it is in the UK. Check it out at the shop
UPDATE thanks to MP:
The Shippey book is available at chapters

Robbit the Hobbit sent in the latest from Wingate (more)

The people over at Tol Galen got to go up to Edoras for the day and meet Peter Jackson and the cast, and you can read their wonderful report here!

Saint sends in the latest from Inquest Gamer Magazine....read on. [More]

Lord of the Rings Board Game Update

Ringer fan Tom sent in some great new info on the status of the Knizia's Lord of the Rings Board Game. Check it out in Gaming Havens. [more]